Riemannian geometry is the branch of differential geometry that studies Riemannian manifolds, smooth manifolds with a Riemannian metric, i.e. with an inner product on the tangent space at each point that varies smoothly from point to point. This gives, in particular, local notions of angle, length of curves, surface area, and volume. From those some other global quantities can be derived by integrating local contributions.

Riemannian geometry originated with the vision of Bernhard Riemann expressed in his inaugurational lecture Ueber die Hypothesen, welche der Geometrie zu Grunde liegen (On the Hypotheses which lie at the Bases of Geometry). It is a very broad and abstract generalization of the differential geometry of surfaces in R3. Development of Riemannian geometry resulted in synthesis of diverse results concerning the geometry of surfaces and the behavior of geodesics on them, with techniques that can be applied to the study of differentiable manifolds of higher dimensions. It enabled Einstein's general relativity theory, made profound impact on group theory and representation theory, as well as analysis, and spurred the development of algebraic and differential topology. 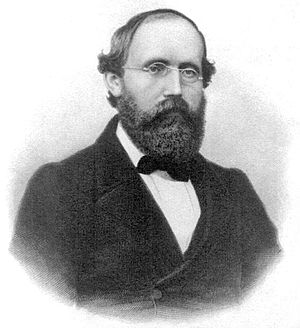 Riemannian geometry was first put forward in generality by Bernhard Riemann in the 19th century. It deals with a broad range of geometries whose metric properties vary from point to point, including the standard types of Non-Euclidean geometry.

Any smooth manifold admits a Riemannian metric, which often helps to solve problems of differential topology. It also serves as an entry level for the more complicated structure of pseudo-Riemannian manifolds, which (in four dimensions) are the main objects of the theory of general relativity. Other generalizations of Riemannian geometry include Finsler geometry.

There exists a close analogy of differential geometry with the mathematical structure of defects in regular crystals. Dislocations and Disclinations produce torsions and curvature.[1][2]

What follows is an incomplete list of the most classical theorems in Riemannian geometry. The choice is made depending on its importance, beauty, and simplicity of formulation. Most of the results can be found in the classic monograph by Jeff Cheeger and D. Ebin (see below).

The formulations given are far from being very exact or the most general. This list is oriented to those who already know the basic definitions and want to know what these definitions are about.