Throughout the majority of human history, the concept of a right to life that's innate to individuals rather than granted as a privilege by those holding social and political power has not existed, and the development of organized civilization often took place in environments of frequent mass murder, with slave-holding societies often granting masters the ability to destroy the lives of their captives. The evolution of human rights as a concept took place slowly in multiple areas in many different ways, with the right to life being no exception to this trend, and the past millennia in particular has seen a large set of national and international legal documents (examples being the Magna Carta and the UN Declaration of Human Rights) codifying the general ideal into specifically worded principles.

The entitlement of a person to make the decision to end their own life through euthanasia is commonly called a right to choose,[1] while people who oppose the legalization of euthanasia are commonly referred to as the right-to-lifers.[2]

The Associated Press Stylebook and Briefing on Media Law guidebook (2000) listing of abortion specifies the publication use of "anti-abortion" instead of "pro-life" and "abortion rights" instead of "pro-abortion" or "pro-choice", and advises avoiding the use of "abortionist" which "connotes a person who performs clandestine abortions", in favor of using a term such as "abortion doctor" or "abortion practitioner".[3] 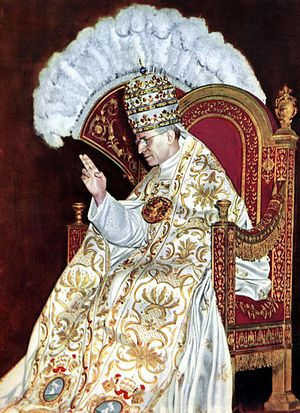 Pope Pius XII seated in the Sedia Gestatoria in 1939.

The term "right to life" is a rhetorical device used in the abortion debate by those who wish to outlaw the intentional termination of a pregnancy[4] and in the context of pregnancy, the term right to life was advanced by Pope Pius XII during a 1951 papal encyclical:

Every human being, even the child in the womb, has the right to life directly from God and not from his parents, not from any society or human authority. Therefore, there is no man, no society, no human authority, no science, no “indication” at all whether it be medical, eugenic, social, economic, or moral that may offer or give a valid judicial title for a direct deliberate disposal of an innocent human life… --- Pope Pius XII, Address to Midwives on the Nature of Their Profession Papal Encyclical, October 29, 1951.[5] 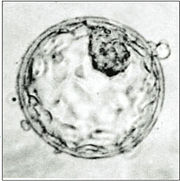 The human blastocyst has a diameter of about 0.1-0.2 mm and comprises 200-300 cells following rapid cell division.

Generally speaking, those identifying themselves as "pro-choice" are advocates for legal elective abortion. At the same time, some advocates for legalized abortion state that they simply do not know for sure where in pregnancy life begins; then-Senator Barack Obama took this view in the 2008 election.[9] Some biologists however, have determined that the properties of life emerge at the cellular level.[10] Other advocates have stated that they hold personal views against abortion but do not support putting those beliefs into law; then-Senator Joe Biden took this view in the 2008 election.[11]

Ethics and right to life

Some utilitarian ethicists argue that the "right to life", where it exists, depends on conditions other than membership of the human species. The philosopher Peter Singer is a notable proponent of this argument. For Singer, the right to life is grounded in the ability to plan and anticipate one's future. This extends the concept to non-human animals, such as other apes, but since the unborn, infants and severely disabled people lack this, he states that abortion, painless infanticide and euthanasia can be "justified" (but are not obligatory) in certain special circumstances, for instance in the case of a disabled infant whose life would be one of suffering, or if its parents didn't wish to raise it and no one desired to adopt it.[12]