The Riigikogu (Estonian pronunciation: [ˈriːgikogu]; from riigi-, of the state, and kogu, assembly) is the unicameral parliament of Estonia. All important state-related questions pass through the Riigikogu. In addition to approving legislation, the Riigikogu appoints high officials, including the Prime Minister and Chief Justice of the Supreme Court, and elects (either alone or, if necessary, together with representatives of local government within a broader electoral college) the President. The Riigikogu also ratifies significant foreign treaties that impose military and proprietary obligations, bring about changes in law, etc.; approves the budget presented by the government as law and monitors the executive power.

April 23, 1919, the opening session of the Estonian Constituent Assembly is the birthday of the Estonian Parliament.[1] The first elections to the Riigikogu took place in 1920. From 1920 to 1938, there were five more elections to the Riigikogu, but several were on the basis of different constitutions. In 1920–1923 there was a closed list, while from 1926 to 1934 there was an optional open list choice. The basis of election was until 1932 proportional representation. The elections were on a regional basis, without any threshold in the first two elections, but from 1926 a moderate threshold (2%) was used.

From 1938–1940 the National Assembly was divided into two chambers: The Chamber of Deputies (Riigivolikogu) and the National Council (Riiginõukogu).

Independence from the Soviet Union

In September 1992, a year after Estonia had regained its independence from the Soviet Union, elections to the Riigikogu took place according to the Constitution of Estonia adopted in the summer of the same year. According to the 1992 constitution, the Riigikogu has 101 members. The present Riigikogu was elected on March 1, 2015. The main differences between this system and a pure political representation, or proportional representation, system are the established 5% national threshold, and the use of a modified d'Hondt formula (the divisor is raised to the power 0.9). This modification makes for more disproportionality than does the usual form of the formula. 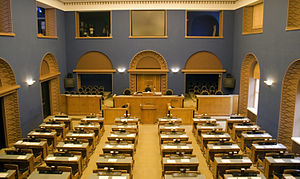 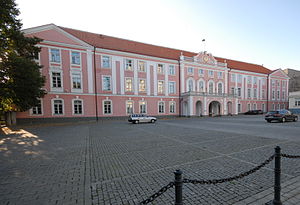 Parliament building in Toompea Castle: the seat of the Parliament.

Speakers of the Riigikogu

Speakers of the Riigivolikogu (lower chamber)

Speaker of the Riiginõukogu (upper chamber)