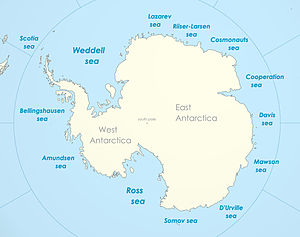 The Riiser-Larsen Sea is a marginal sea in the Southern Ocean. It is bordered by the Lazarev Sea to the west and the Cosmonauts Sea to the east, or between 14°E and 30°E. Its northern border is defined to be the 65th parallel south. The name, proposed by the Soviet Union, was never officially approved by the International Hydrographic Organization (IHO).

The Riiser-Larsen Sea was named in 1962 by the Soviet Antarctic Expedition in honor of Norwegian aviation pioneer and polar explorer Hjalmar Riiser-Larsen (1890–1965). The IHO 2002 draft was never approved by the IHO (or any other organization), and the 1953 IHO document (which does not contain the name) remains currently in force.[1] Leading geographic authorities and atlases do not use the name, including the 2014 10th edition World Atlas from the United States' National Geographic Society and the 2014 12th edition of the British Times Atlas of the World. But Soviet and Russian-issued maps do.[2]

Depths exceed 3,000 meters in most of the waters here. The area is covered with drifting ice almost year-round. It would stretch over an area of 1,138,000 km².[3][4] There are many icebergs.

To the south of this area lies the Princess Astrid Coast and Princess Ragnhild Coast of Queen Maud Land. In the western part is the Lazarev Ice Shelf, and further east are Erskine Iceport and Godel Iceport, and the former Belgian Roi-Baudouin Station.