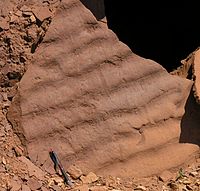 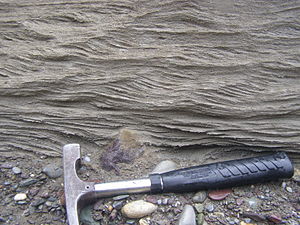 In geology, ripple marks are sedimentary structures (i.e. bedforms of the lower flow regime) and indicate agitation by water (current or waves) or wind. 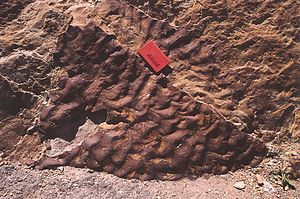 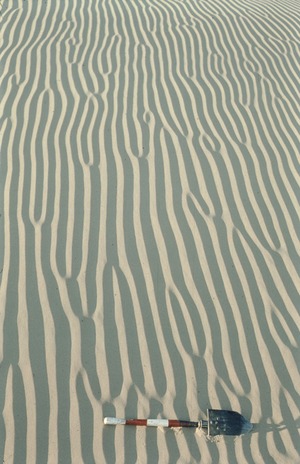 Normal ripples
Also known as impact ripples, these occur in the lower part of the lower flow regime sands with grain sizes between 0.3-2.5 mm and normal ripples form wavelengths of 7-14 cm Normal ripples have straight or slightly sinuous crests approximately transverse to the direction of the wind.

Fluid drag ripples
Also known as aerodynamic ripples, these are formed with fine, well-sorted grain particles accompanied by high velocity winds which result in long, flat ripples. The flat ripples are formed by long saltation paths taken by grains in suspension and grains on the ground surface.

Crest
The point on a wave with the maximum value or height. It is the location at the peak of the wave cycle as shown in picture to the right.

Trough
The opposite of a crest, so the minimum value or height in a wave. It is the location at the very lowest point of a wave cycle also shown in picture to right.

Lee
The lee side has a steeper slope than the stoss. The lee is always on the back side of the ripple, which is also on the opposite side of where the current flow meets the ripple. The current flows down the lee side.

Stoss
The stoss is the side of a wave or ripple that has a gentle slope versus a steeper slope. Current always flows up the stoss side and down the lee side. This can be used to determine current flow during the time of ripple formation.