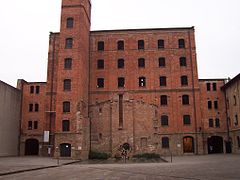 Internal courtyard of the Risiera di San Sabba. The remains of the crematorium used by the Nazis who destroyed it before escaping, are proof of their crimes, can be seen on the wall

Risiera di San Sabba (Slovene: Rižarna) is a 5-storey brick-built compound located in Trieste, northern Italy, that functioned during World War II as a Nazi concentration camp for the detention and killing of political prisoners, and a transit camp for Jews, most of whom were then deported to Auschwitz.[1] SS members Odilo Globocnik and Karl Frenzel, and Ivan Marchenko are all said to have participated in the killings at this camp. Erwin Lambert is claimed to have installed cremation facilities. Today, the former concentration camp operates as a civic museum.[2]

The building was erected in 1913 and first used as a rice-husking facility (hence the name "Risiera"). During World War II, German occupation forces in Trieste used the building to transport, detain and exterminate prisoners. Many occupants of Risiera di San Sabba were transported to the German Nazi concentration camp at Auschwitz-Birkenau in Occupied Poland. Historians estimate that over 3,000 people were killed at the Risiera camp and thousands more imprisoned and transported elsewhere. The majority of prisoners came from Friuli, the Julian March and the Province of Ljubljana.

Boris Pahor was also held at the camp before being transported to the concentration camps of Dachau and Natzweiler.

After the war, the camp served as a refugee center and transit point. In the 1950s, many people, especially ethnic Italians fleeing then communist Yugoslavia, passed through the camp.