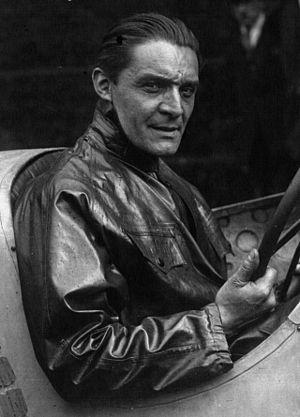 Born near Rambouillet, Île-de-France, France, Robert Benoist was the son of Baron Henri de Rothschild's gamekeeper. As a young man, Benoist served during World War I in the French infantry, then as a fighter pilot in the new Armée de l'Air and ultimately as a flying instructor.

Looking for excitement in the post-war world, Benoist joined the de Marçay car company as a test driver. He then moved on to Salmson and was very successful in cyclecar races before being signed to drive for Delage in 1924. The next year, teamed with Albert Divo, he won the French Grand Prix in the race that claimed the life of Italian racing star Antonio Ascari.

In 1927, driving a Delage 15-S-8, he won the French, Spanish, Italian and British Grand Prix races, earning the season championship title for the French manufacturer. 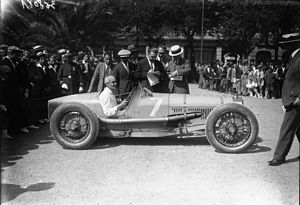 When the Delage company dropped out of racing, Robert Benoist was without a job and was appointed manager of the Banville Garage in Paris. He did occasional races for the Bugatti team, finishing second in the 1928 San Sebastián Grand Prix in Spain. The following year he teamed up with Attilio Marinoni to win the Spa 24 Hours race in Belgium, driving an Alfa Romeo. At the end of the season he retired until 1934, when he made a comeback with the Bugatti team. He was soon made head of the competition department and masterminded the company's Le Mans programme. In 1937 he partnered with Jean-Pierre Wimille to win the 24 hours of Le Mans[1] endurance race. Following that victory, Benoist retired permanently, but continued to run Bugatti's racing department until called up into the French Air Force.

In addition to Jean-Pierre Wimille, Robert Benoist became good friends with another Grand Prix driver, William Grover-Williams.[2] When World War II broke out and France was occupied, these three race drivers all escaped to England where they joined the Special Operations Executive as secret agents[3] to return to France to assist the French Resistance. Benoist was commissioned into the British Army as a captain.[4] Parachuted into France, Benoist helped organize sabotage cells and with William Grover-Williams moved weapons from air-drops in the Rambouillet forest to his home at Auffargis for storage and distribution.

Three days later, Robert Benoist was apprehended in Paris. While being driven to Gestapo headquarters, Benoist leaped from the moving vehicle and escaped,[3] eventually being smuggled back to England via the underground.

Benoist would later return to France on a second mission, lasting from October 1943 to February 1944, after which he returned to London for a short time before going back to France in March to work in the Nantes area with fellow SOE agent Denise Bloch.

Robert Benoist was arrested on 18 June 1944 and shipped to Buchenwald concentration camp where he was executed three months later, on 9 September.

Following Germany's surrender, on 9 September 1945, the "Coupe Robert Benoist" automobile race was held in Paris in his memory.

Captain Robert Benoist is recorded on the Brookwood Memorial in Surrey, England and as one of the SOE agents who died for the liberation of France, he is listed on the "Roll of Honor" on the Valençay SOE Memorial in the town of Valençay, in the Indre departement of France.

In his honor, the village of Auffargis named a street after him and it is there in the churchyard cemetery on "Allée Robert Benoist" that fellow pioneer race driver, Ferenc Szisz is buried. Among the remaining grandstands still standing at the former Reims-Gueux circuit in France is one named "Tribune Robert Benoist".