Hunter was born in Loretto, Essex County, Virginia, the son of James Hunter and Maria (Garnett) Hunter.[1] He was a maternal first cousin of both Robert S. Garnett and Richard B. Garnett. He entered the University of Virginia in his seventeenth year and was one of its first graduates.[2] While he was a student, he became a member of the Jefferson Literary and Debating Society. He then studied law at the Winchester Law School, and in 1830 was admitted to the bar. From 1835 to 1837 he was a member of the Virginia House of Delegates.

In the Senate, he became chairman of the Committee on Finance in 1850. He is credited with bringing about a reduction of the quantity of silver in the smaller coins. He was the author of the Tariff of 1857 and of the bonded-warehouse system, and was one of the first to advocate civil service reform. In 1853 he declined President Millard Fillmore's offer to make him Secretary of State. 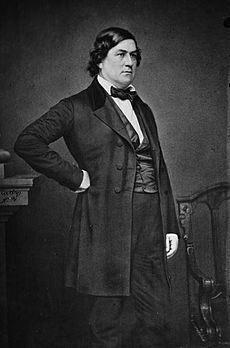 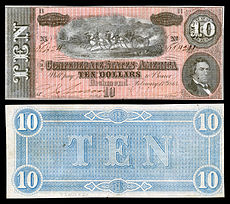 At the first session of 1860 Democratic National Convention in Charleston, South Carolina, Hunter was a contender for the presidential nomination, but received little support except from the Virginia delegation. On seven of the first eight ballots, he was a very distant second to the leader, Stephen A. Douglas, and was third on the remaining 42 ballots. When the convention reconvened in Baltimore, most Southerners withdrew, including Hunter, and the nomination went to Douglas.

Hunter did not regard Lincoln's election as being of itself a sufficient cause for secession. On January 11, 1861, he proposed an elaborate but impracticable scheme for the adjustment of differences between the North and the South. When this and several other efforts to the same end had failed, he quietly urged his own state to pass the ordinance of secession. He was expelled from the Senate for supporting secession.

In July 1861, Hunter was appointed Confederate States Secretary of State. He resigned on February 18, 1862, having been elected a Confederate Senator. He served in the Confederate Senate until the end of the war, and was at times President pro tem.

As a Confederate Senator, he was often a caustic critic of Confederate President Jefferson Davis. Despite this friction, he was appointed by Davis as one of three commissioners sent to attempt peace negotiations in 1865, and met with President Lincoln at the Hampton Roads Conference. After Lee's surrender, Hunter was summoned by President Lincoln to confer regarding the restoration of Virginia.

From 1874 to 1880 he was the treasurer of Virginia, and from 1885 until his death was collector of the Port of Tappahannock, Virginia. He died near Lloyds, Virginia, in 1887. 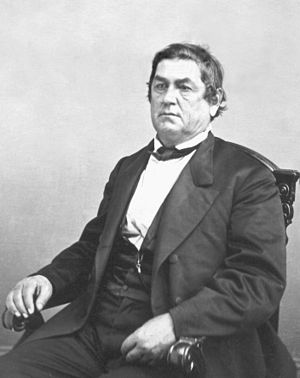 Hunter appeared in the 2012 film Lincoln, which included the Hampton Roads Conference. He was portrayed by Mike Shiflett.

Among his works was Origin of the Late War, about the causes of the Civil War.

Hunter was pictured on the Confederate $10 bill.[4]