Robert McCormick Adams Jr. (born July 23, 1926) is a U.S. anthropologist and was Secretary of the Smithsonian Institution from 1984 to 1994.[2] He has worked in both the Near East and Mesoamerica. In scholarly circles, he is best known for his research in Iraq.[3]

Secretary of the Smithsonian 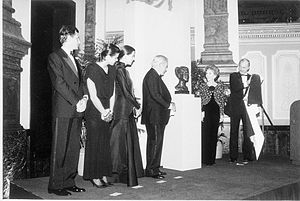 Adams and Nancy Reagan at the presentation of a portrait head of Grace Kelly at the National Portrait Gallery in October 1986, alongside Kelly's widower, Prince Rainier III of Monaco, and her children, Albert, Caroline and Stéphanie

Adams served as the ninth secretary of the Smithsonian Institution in Washington, D.C. from 1984 to 1994.[3] He was installed as Smithsonian Secretary on September 17, 1984, becoming the head of an Institution with thirteen museums, a National Zoo, and scientific and cultural research facilities in nine states and the Republic of Panama. As the successor to S. Dillon Ripley, Adams sought to prepare the Institution for the 21st century, focus on scholarship, increase public programs, and emphasize a broader representation and involvement of diverse ethnic and cultural communities in the Smithsonian and its programs. Adams oversaw construction of the Quadrangle, a building project that brought together two museums and many disparate offices into a single structure, but he also sounded the alarm to the US Congress about the state of the Institution's aging infrastructure and began the systematic renovation of existing facilities. These “bricks and mortar” projects included renovation of the Freer Gallery of Art, the construction of the Mathias Laboratory at the Smithsonian Environmental Research Center, and the Earl S. Tupper Research and Conference Center at the Smithsonian Tropical Research Institute in Panama.[4]

During Adams’ tenure, the Smithsonian acquired the National Museum of the American Indian, and the National Postal Museum was established to showcase the National Philatelic Collection. The National Science Resources Center was created to improve the teaching of pre-college science and mathematics, and the International Center was established to explore ancient and evolving cultures and to serve as the Smithsonian's headquarters for Latin American scholarship, exhibitions, and programs. Adams formed the Smithsonian Cultural Education Committee to promote diversity across all aspects of Smithsonian operations. He also encouraged digitization projects, such as the National Air and Space Museum’s videodisc technology for storage and retrieval of documents, photos, and other information. The “culture wars” arrived at the Smithsonian in 1991, with criticisms of The West as America, an exhibit at the Smithsonian American Art Museum. In 1994, Science in American Life, at the National Museum of American History, provoked outcries from the scientific community for its critical look at American science. And the first script for the Enola Gay exhibit in the National Air and Space Museum was completed shortly before Adams' departure.[4] 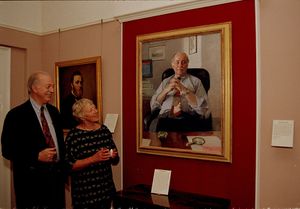 Secretary Adams and his wife

Adams retired from the Smithsonian after ten years of service in 1994 and returned to academia as an adjunct professor at the University of California, San Diego, where he is still working today. He received a Distinguished Service Award from the Society for American Archaeology in 1996 and has continued his fieldwork and research in the archaeology and anthropology of the Middle East.[3]

Robert McCormick Adams has had a wide-ranging career spanning many fields. Geographically, his interests have involved extensive fieldwork in the Middle East, but have also included Mexico. With a broadly interdisciplinary approach, he has studied the course of development of urban civilizations over many millennia, and he has also dealt with the history of technology. Partly as an outgrowth of decades of experience in Iraq, Iran and Saudi Arabia, he has until recently been involved in studies of multiethnic violence under the joint sponsorship of the US National Academy of Sciences and the Russian Academy of Sciences.

Adams has proposed, based on his excavations in Mesopotamia, that there was no single condition behind the complex societies of ancient cities and states; they were a product of numerous interrelated conditions, especially social organization and craft specialization. He was elected a Fellow of the American Academy of Arts and Sciences in 1957.[5] Adams received the Gold Medal Award for Distinguished Archaeological Achievement in 2002 from the Archaeological Institute of America.[3]