From Infogalactic: the planetary knowledge core
Jump to: navigation, search
File:The-robots-of-dawn-doubleday-cover.jpg
The Robots of Dawn (1983)

The Robot series is a series of 38 short stories and 5 novels by science fiction author Isaac Asimov (1920–1992) featuring positronic robots.

Most of Asimov's robot short stories, which he began to write in 1939, are set in the first age of positronic robotics and space exploration. The unique feature of Asimov's robots are the Three Laws of Robotics, hardwired in a robot's positronic brain, with which all robots in his fiction must comply, and which ensure that the robot does not turn against its creators.

The stories were not initially conceived as a set, but rather all feature his positronic robots — indeed, there are some inconsistencies among them, especially between the short stories and the novels. They all, however, share a theme of the interaction of humans, robots, and morality. Some of the short stories found in The Complete Robot and other anthologies appear not to be set in the same universe as the Foundation Universe. "Victory Unintentional" has positronic robots obeying the Three Laws, but also a non-human civilization on Jupiter. "Let's Get Together" features humanoid robots, but from a different future (where the Cold War is still in progress), and with no mention of the Three Laws. The multiple series offers a sense of completeness, because all of its works are interconnected in some way. 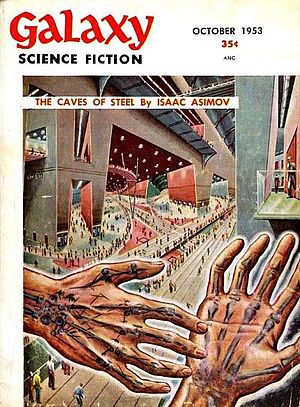 The first installment of Asimov's The Caves of Steel took the cover of the October 1953 issue of Galaxy Science Fiction, illustrated by Ed Emshwiller

The first book is I, Robot (1950), a collection of nine previously published short stories woven together as a 21st-century interview with robopsychologist Dr. Susan Calvin. The next four robot novels The Caves of Steel (1953), The Naked Sun (1955), The Robots of Dawn (1983), and Robots and Empire (1985) make up the Elijah Baley (sometimes "Lije Baley") series, and are mysteries starring the Terran Elijah Baley and his humaniform robot partner, R. Daneel Olivaw. They are set thousands of years after the short stories, and focus on the conflicts between Spacers — descendants of human settlers from other planets, and the people from an overcrowded Earth. "Mirror Image", one of the short stories from The Complete Robot anthology, is also set in this time period (between The Naked Sun and The Robots of Dawn), and features both Baley and Olivaw. Another short story (found in The Early Asimov anthology), "Mother Earth", is set about a thousand years before the robot novels, when the Spacer worlds chose to become separated from Earth.

The Caves of Steel and The Naked Sun are both considered classics of the genre, but the later novels were also well received, with The Robots of Dawn nominated for both the Hugo and Locus Awards in 1984,[1] and Robots and Empire shortlisted for the Locus Award for Best Science Fiction Novel in 1986.[2]

One source of inspiration for Asimov's robots was the Zoromes, a race of mechanical men that featured in a 1931 short story called "The Jameson Satellite", by Neil R. Jones. Asimov read this story at the age of 11, and acknowledged it as a source of inspiration in Before the Golden Age (1975), an anthology of 1930s science fiction in which Asimov told the story of the science fiction he read during his formative years. In Asimov's own words:

It is from the Zoromes, beginning with their first appearance in "The Jameson Satellite," that I got my own feeling for benevolent robots who could serve man with decency, as these had served Professor Jameson. It was the Zoromes, then, who were the spiritual ancestors of my own "positronic robots," all of them, from Robbie to R. Daneel.[3]

Merging with other series

Asimov later integrated the Robot Series into his all-engulfing Foundation series, making R. Daneel Olivaw appear again twenty thousand years later in the age of the Galactic Empire, in sequels and prequels to the original Foundation trilogy; and in the final book of the Robots series — Robots and Empire — we learn how the worlds that later formed the Empire were settled, and how Earth became radioactive (which was first mentioned in Pebble in the Sky).

The Stars, Like Dust states explicitly that the Earth is radioactive because of a nuclear war. Asimov later explained that the in-universe reason for this perception was that it was formulated by Earthmen many centuries after the event, and which had become distorted, due to the loss of much of their planetary history.[citation needed] This work is generally regarded as part of the Empire series, but does not directly mention either Trantor or the Spacer worlds. One character, however, is seen with a visi-sonor, the same musical instrument that is played by the clown Magnifico in Foundation and Empire. Based on details from the novel, such as Earth still being mostly habitable and the absence of a unified galactic government, it probably would fall during the early formation of the Empire (before it expanded to encompass the galaxy).

The 1989 anthology Foundation's Friends included the positronic robot stories "Balance" by Mike Resnick, "Blot" by Hal Clement, "PAPPI" by Sheila Finch, "Plato's Cave" by Poul Anderson, "The Fourth Law of Robotics" by Harry Harrison and "Carhunters of the Concrete Prairie" by Robert Sheckley. Not all of these stories are entirely consistent with the Asimov stories. The anthology also included "Strip-Runner" by Pamela Sargent, set in the era of the Elijah Baley novels.

Shortly before his death in 1992, Asimov approved an outline for three novels (Caliban, Inferno, Utopia) by Roger MacBride Allen, set between Robots and Empire and the Empire series, telling the story of the terraforming of the Spacer world Inferno, and about the robot revolution started by creating a "No Law" Robot, and then New Law Robots.

There is also another set of novels by various authors (Isaac Asimov's Robot City, Robots and Aliens and Robots in Time series), loosely connected to the Robots Series, but containing many inconsistencies with Asimov's books, which are not generally considered canon.

More recently, the Asimov estate authorized publication of another trilogy of robot mysteries by Mark W. Tiedemann. These novels, which take place several years before Asimov's Robots and Empire, are Mirage (2000), Chimera (2001), and Aurora (2002). These were followed by yet another robot mystery, Alexander C. Irvine's Have Robot, Will Travel (2004), set five years after the Tiedemann trilogy.

The first screen adaptation of an Asimov robot story was the third episode of the British television series Out of This World based on "Little Lost Robot", first broadcast in 1962. Dramatised by Leo Lehman and starring Maxine Audley as Susan Calvin, this is the only episode of the series known to have survived.

This was followed by a 1964 dramatision of The Caves of Steel for the BBC series Story Parade and then four episodes of the BBC television series Out of the Unknown, based on "Satisfaction Guaranteed" (1966), "Reason (in an episode titled "The Prophet", 1967), "Liar!" (1969), and The Naked Sun (1969). In these adaptations, Elijah Baley was portrayed by Peter Cushing (The Caves of Steel) and Paul Maxwell (The Naked Sun), R. Daneel Olivaw by John Carson (The Caves of Steel) and David Collings (The Naked Sun), and Susan Calvin by Beatrix Lehmann ("The Prophet") and Wendy Gifford ("Liar!"). In "Satisfaction Guaranteed", the character of Susan Calvin was renamed Dr Inge Jensen and portrayed by Ann Firbank.

In the late 1970s, Harlan Ellison wrote a screenplay based on Asimov's book I, Robot for Warner Bros.. This film project was ultimately abandoned, but Ellison's script was later published in book form as I, Robot: The Illustrated Screenplay (1994).

Bicentennial Man (1999) was the first theatrical movie adaptation of any Asimov story or novel and was based on both Asimov's original short story (1976) and its novel expansion, The Positronic Man (1993). The film starred Robin Williams as robot Andrew Martin.

The Twentieth Century Fox motion picture I, Robot (2004) presented an original story set in Asimov's Robot universe featuring Dr Susan Calvin and other characters from Asimov's I, Robot collection. The film originated from a spec screenplay entitled 'Hardwired' written in 1995 by Jeff Vintar.[5] While this earlier script had no direct connections with Asimov, it was considered suitably 'Asimovian' in nature (being a locked room mystery with robot suspects) to provide the basis for an I, Robot movie. Elements from several Asimov robot stories were woven into the overall storyline, including "Little Lost Robot", "The Evitable Conflict" and "Robot Dreams". The movie starred Will Smith as Dale Spooner and Bridget Moynahan as Susan Calvin.