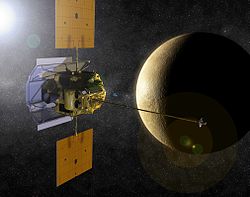 An artist's interpretation of the MESSENGER spacecraft at Mercury

A robotic spacecraft is an unmanned spacecraft, usually under telerobotic control. A robotic spacecraft designed to make scientific research measurements is often called a space probe. Many space missions are more suited to telerobotic rather than crewed operation, due to lower cost and lower risk factors. In addition, some planetary destinations such as Venus or the vicinity of Jupiter are too hostile for human survival, given current technology. Outer planets such as Saturn, Uranus, and Neptune are too distant to reach with current crewed spaceflight technology, so telerobotic probes are the only way to explore them.

Many artificial satellites are robotic spacecraft, as are many landers and rovers. 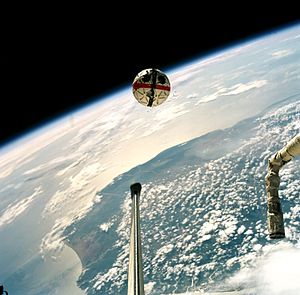 The first space mission, Sputnik 1, was an artificial satellite put into Earth orbit by the USSR on 4 October 1957. On 3 November 1957, the USSR orbited Sputnik 2, the first to carry a living animal into space – a dog.[1]

In spacecraft design, the United States Air Force considers a vehicle to consist of the mission payload and the bus (or platform). The bus provides physical structure, thermal control, electrical power, attitude control and telemetry, tracking and commanding.[3]

JPL divides the "flight system" of a spacecraft into subsystems.[4] These include:

This is the physical backbone structure. It:

This is sometimes referred to as the command and data subsystem. It is often responsible for:

This system is mainly responsible for the correct spacecraft's orientation in space (attitude) despite external disturbance-gravity gradient effects, magnetic-field torques, solar radiation and aerodynamic drag; in addition it may be required to reposition movable parts, such as antennas and solar arrays.[5]

Components in the telecommunications subsystem include radio antennas, transmitters and receivers. These may be used to communicate with ground stations on Earth, or with other spacecraft.[6]

The supply of electric power on spacecraft generally come from photovoltaic (solar) cells or from a radioisotope thermoelectric generator. Other components of the subsystem include batteries for storing power and distribution circuitry that connects components to the power sources.[7]

Temperature control and protection from the environment

Spacecraft are often protected from temperature fluctuations with insulation. Some spacecraft use mirrors and sunshades for additional protection from solar heating. They also often need shielding from micrometeoroids and orbital debris.[8]

Mechanical components often need to be moved for deployment after launch or prior to landing. In addition to the use of motors, many one-time movements are controlled by pyrotechnic devices.[9]

Robotic spacecraft use telemetry to radio back to Earth acquired data and vehicle status information. Although generally referred to as "remotely controlled" or "telerobotic", the earliest orbital spacecraft – such as Sputnik 1 and Explorer 1 – did not receive control signals from Earth. Soon after these first spacecraft, command systems were developed to allow remote control from the ground. Increased autonomy is important for distant probes where the light travel time prevents rapid decision and control from Earth. Newer probes such as Cassini–Huygens and the Mars Exploration Rovers are highly autonomous and use on-board computers to operate independently for extended periods of time.[10][11] 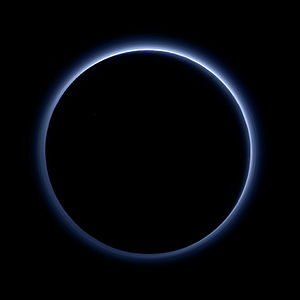 A space probe is a scientific space exploration mission in which a spacecraft leaves Earth and explores space. It may approach the Moon, enter interplanetary, flyby or orbit other bodies, or approach interstellar space.