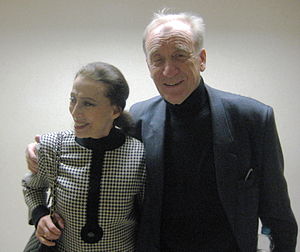 Rodion Shchedrin with his wife, Maya Plisetskaya, in 2009

Rodion Konstantinovich Shchedrin (Russian: Родио́н Константи́нович Щедри́н, Rodion Konstantinovič Ščedrin, pronounced [rədʲɪˈon kənstɐnʲˈtʲinəvʲɪtɕ ɕːɪˈdrʲin]; born 16 December 1932) is a Russian composer and pianist, winner of the Lenin (1984), USSR State Prize (1972) and the State Prize of the Russian Federation (1992), and a former member of the Interregional Deputy Group (1989–1991). He is also a citizen of Lithuania[1] and Spain.[2]

Shchedrin was born in Moscow into a musical family—his father was a composer and teacher of music theory. He studied at the Moscow Choral School and Moscow Conservatory (graduating in 1955) under Yuri Shaporin (composition) and Yakov Flier (piano). He was married to the well-known ballerina Maya Plisetskaya from 1958 until her death in 2015.

Shchedrin's early music is tonal, colourfully orchestrated and often includes snatches of folk music, while some later pieces use aleatoric and serial techniques. In the west the music of Shchedrin has won popularity mainly through the work of Mstislav Rostropovich who has made several successful recordings.

Among his works are the ballets The Little Hump-backed Horse (1955), Carmen Suite (1967), based on the opera Carmen by Georges Bizet (the project had been turned down by both Shostakovich and Khachaturian), Anna Karenina (1971, on the novel by Leo Tolstoy), and Lady with a Lapdog (1985); the operas Not Only Love (1961), and Dead Souls (1976, after Nikolai Gogol's novel); piano concertos, symphonies, chamber and piano music and other works. He composed 24 Preludes and Fugues after he heard those of Shostakovich. Also remarkable is his Polyphonic Notebook.

He has written five concertos for orchestra: the first, variously translated as Naughty Limericks or Mischievous Folk Ditties (neither of which completely get the gist of the Russian which refers to a chastushka (часту́шка), an irreverent, satirical kind of folk song) is by far the best known, and was the work which first established him on the international stage.[3] The second of the Concertos for Orchestra was subtitled Zvony (The Chimes), and was premiered by the New York Philharmonic under Leonard Bernstein as one of the many commissions in honor of the orchestra's 125th anniversary. The third Concerto for Orchestra is based on old music of Russian provincial circuses. Concerto 4, Khorovody (round dances), was written in 1989, and Concerto 5, Four Russian Songs, was written in 1998.

As well as a distinguished compositional career (for which he was made a member of the Berlin Academy of Arts in 1989 and received the Russian State Prize from President Boris Yeltsin in 1992), Shchedrin is himself a virtuoso pianist and organist, taking the piano part in person for the premieres of the first three of his six piano concertos. At a remarkable concert on 5 May 1974 Shchedrin performed the feat of appearing as soloist in all three of his then-completed piano concertos, one after the other. The concert, with the USSR Symphony Orchestra under Evgeny Svetlanov was recorded and released on LP, then CD. Following the collapse of the Soviet regime, Shchedrin has taken advantage of the new opportunities for international travel and musical collaboration, and now largely divides his time between Munich and Moscow.

On June 11–14, 2008 Shchedrin Days took place in Armenia with the participation of Shchedrin and Maya Plisetskaya as honorary guest.

Invited by Walter Fink, he was the 19th composer featured in the annual Komponistenporträt of the Rheingau Musik Festival in 2009. He and his wife attended the concerts which included his Russian liturgy The Sealed Angel for choir and flute, performed in Eberbach Abbey. His chamber music included Ancient Melodies of Russian Folk Songs (2007) with the cellist Raphael Wallfisch and himself at the piano, and Meine Zeit, mein Raubtier with tenor Kenneth Tarver and pianist Roland Pontinen who performed it also at the Verbier Festival.

The premiere of a German version of his opera Lolita was performed as the opening night of the Internationale Maifestspiele Wiesbaden in a production of the Hessisches Staatstheater Wiesbaden.[4]

"A Christmas Tale", billed as an "Opera-Feerie", libretto by the composer after Leskovs translation of Nemcova's fairy tale. World premiere at the Mariinsky Two in St.Petersburg, conducted by Valery Gergiev, 27th December 2015. The opera contains elements of the original Slavic tale of Cinderella as well as the Russian story of "The Twelve Months".

Nina and the Twelve Months (1988). Musical in two acts on a libretto by T. Futjita after Samuil Marshak's story. First performance on 8 August 1988 in Tokyo.

Concertos for solo instrument with orchestra

For soloist, chorus and orchestra

For one part solo