Rohingya (/ˈroʊɪndʒə/, /ˈroʊhɪndʒə/, /ˈroʊɪŋjə/, or /ˈroʊhɪŋjə/),[3] or Ruáingga, is a language spoken by the Rohingya people of the Rakhine State in Burma.[4][5] It is related to the Chittagonian language spoken in the neighboring southeastern Chittagong Division of Bangladesh. 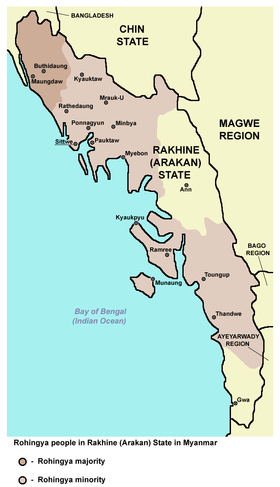 Various writing systems are used, including Arabic,[6] Urdu, Hanifi, and Burmese, and the newer Rohingyalish, based on the Latin script.

Written in Arabic script, the first Rohingya language texts are more than 200 years old.[7] While Arakan was under British rule (1826–1948), the Rohingya people used mainly English and Urdu for written communication. Since independence in 1948, Burmese has been used in all official communications. Since the early 1960s, Rohingya scholars have started to realize the need for a writing system suited to their own language.

In 1975 a writing system was developed using Arabic letters; other scholars adopted Urdu script to remedy some deficiencies of the Arabic. Neither proved satisfactory, however, and most Rohingyas found it difficult to read the language in either version.

Today, there are efforts for creating a Rohingya Unicode font based on Arabic letters (since those are far more understood by the people) with additional tone signs.[7]

Molana Hanif and his colleagues developed a new set of right-to-left oriented characters based mainly on Arabic script, with a few borrowings from Roman and Burmese. This approach was an improvement and was appreciated by Rohingya Islamic scholars, used to studying in Arabic and Urdu. However, the new script was criticized because the characters were very similar to each other, requiring longer memorization time and careful writing to avoid confusion. Despite such criticism, the Hanifi script is currently in use and a Unicode standard for it is being developed.[8]

The character set table of the Rohingya language writing system uses the Latin letters shown above (ç and ñ with green background). The vowels are written both unaccented (aeiou) and accented (áéíóú). The use of c, ç and ñ is adapted to the language; c represents /ʃ/ (English sh), ç is the retroflex r ([ɽ]),[7] and ñ indicates a nasalized vowel (e.g., fañs /faⁿs/ 'five'). Crucially, these can all be accessed from an English keyboard, for example by using the English (US) International keyboard.

There are six vowels and several diphthongs in the Rohingya language.[6] They contrast between "open-o" ([ɔ]) and "closed-o" ([o]) by using the different spellings ⟨o⟩/⟨ó⟩ and ⟨ou⟩/⟨óu⟩ respectively.

Accented vowels represent stressed (or "hard" vowels). Repeating a vowel lengthens it.[9] Thus, tonals are marked by arranging the location of a stressed vowel in a lengthened pair, like ⟨aá⟩ and ⟨áa⟩.[9]

1. If a noun ends with a vowel then the article is either án or wá if singular, or ún if plural or uncountable.
Usually wá is used for round-fatty objects, and án for flat-thin objects.

2. If a noun ends with a consonant then the article is the end-consonant plus án or wá for singular or ún for plural.

3. If a noun ends with r, then the article is g plus án or wá for singular or ún for plural.

Indefinite articles can be used either before or after the noun. Uggwá usually is used for roll/round/fatty shaped objects and ekkán is for thin/flat shaped objects.

The interrogative is indicated by né at the end of the sentence.

Example of a Rohingya case inflection is given below, using the singular forms of the Rohingya term for "hóliba (tailor)" which belongs to Rohingya's first declension class.

Seventy or more different forms are available in Rohingya. Dash (-) between letters are to be removed, it is used for initial understanding only, how it is formed.