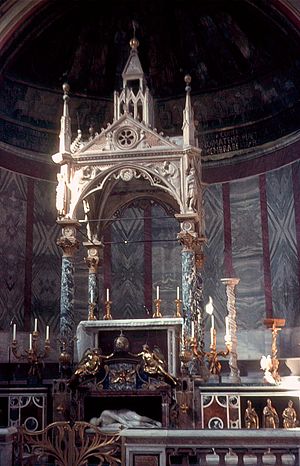 Altar of Santa Cecilia in Trastevere in Rome, as arranged in 1700

The Roman Rite, the most widespread liturgical rite in the Catholic Church, is one of the Latin rites used in the Western or Latin Church. The Roman Rite has been adapted over the centuries and its Eucharistic liturgy can be divided into three stages: the Pre-Tridentine Mass, Tridentine Mass and Mass of Paul VI.

The 2007 motu proprio Summorum Pontificum specifies the circumstances in which priests of the Latin Church may continue to use the extraordinary form of the Roman Rite in the 1962 Roman Missal.

While other rites use more poetic language, the Roman Rite is noted for its sobriety of expression.[1] In its Tridentine form, it was noted also for its formality: the Tridentine Missal minutely prescribed every movement, to the extent of laying down that the priest should put his right arm into the right sleeve of the alb before putting his left arm into the left sleeve (Ritus servandus in celebratione Missae, I, 3). Concentration on the exact moment of change of the bread and wine into the Body and Blood of Christ has led, in the Roman Rite, to the consecrated Host and the chalice being shown to the people immediately after the Words of Institution. If, as was once most common, the priest offers Mass while facing ad apsidem (towards the apse), ad orientem (towards the east) if the apse is at the east end of the church, he shows them to the people, who are behind him, by elevating them above his head. As each is shown, a bell (once called "the sacring bell") is rung and, if incense is used, the host and chalice are incensed (General Instruction of the Roman Missal, 100). Sometimes the external bells of the church are rung as well. Other characteristics that distinguish the Roman Rite from the rites of the Eastern Catholic Churches are frequent genuflections, kneeling for long periods, and keeping both hands joined together.

Antiquity of the Roman Mass

In his 1912 book on the Roman Mass, Adrian Fortescue wrote: "Essentially the Missal of Pius V is the Gregorian Sacramentary; that again is formed from the Gelasian book, which depends on the Leonine collection. We find the prayers of our Canon in the treatise de Sacramentis and allusions to it in the 4th century. So our Mass goes back, without essential change, to the age when it first developed out of the oldest liturgy of all. It is still redolent of that liturgy, of the days when Caesar ruled the world and thought he could stamp out the faith of Christ, when our fathers met together before dawn and sang a hymn to Christ as to a God. The final result of our inquiry is that, in spite of unsolved problems, in spite of later changes, there is not in Christendom another rite so venerable as ours." In a footnote he added: "The prejudice that imagines that everything Eastern must be old is a mistake. Eastern rites have been modified later too; some of them quite late. No Eastern Rite now used is as archaic as the Roman Mass."[2]

In the same book, Fortescue acknowledged that the Roman Rite underwent profound changes in the course of its development. His ideas are summarized in the article on the "Liturgy of the Mass" that he wrote for the Catholic Encyclopedia (published between 1907-1914) in which he pointed out that the earliest form of the Roman Mass, as witnessed in Justin Martyr's 2nd-century account, is of Eastern type, while the Leonine and Gelasian Sacramentaries, of about the 6th century, "show us what is practically our present Roman Mass". In the interval there was what Fortescue called "a radical change". He quoted the theory of A. Baumstark that the Hanc Igitur, Quam oblationem, Supra quæ and Supplices, and the list of saints in the Nobis quoque were added to the Roman Canon of the Mass under "a mixed influence of Antioch and Alexandria", and that "St. Leo I began to make these changes; Gregory I finished the process and finally recast the Canon in the form it still has."[3]

We have then as the conclusion of this paragraph that at Rome the Eucharistic prayer was fundamentally changed and recast at some uncertain period between the fourth and the sixth and seventh centuries. During the same time the prayers of the faithful before the Offertory disappeared, the kiss of peace was transferred to after the Consecration, and the Epiklesis was omitted or mutilated into our "Supplices" prayer. Of the various theories suggested to account for this it seems reasonable to say with Rauschen: "Although the question is by no means decided, nevertheless there is so much in favour of Drews's theory that for the present it must be considered the right one. We must then admit that between the years 400 and 500 a great transformation was made in the Roman Canon" (Euch. u. Busssakr., 86).

In the same article Fortescue went on to speak of the many alterations that the Roman Rite of Mass underwent from the 7th century on (see Pre-Tridentine Mass), in particular through the infusion of Gallican elements, noticeable chiefly in the variations for the course of the year. This infusion Fortescue called the "last change since Gregory the Great" (who died in 604).

The Eucharistic Prayer normally used in the Byzantine Rite is attributed to Saint John Chrysostom, who died in 404, exactly two centuries before Pope Gregory the Great. The East Syrian Eucharistic Prayer of Addai and Mari, which is still in use, is certainly much older.

The Roman Rite no longer has the pulpitum, or rood screen, a dividing wall characteristic of certain medieval cathedrals in northern Europe, or the iconostasis or curtain that heavily influences the ritual of some other rites. In large churches of the Middle Ages and early Renaissance the area near the main altar, reserved for the clergy, was separated from the nave (the area for the laity) by means of a rood screen extending from the floor to the beam that supported the great cross (the rood) of the church and sometimes topped by a loft or singing gallery. However, by about 1800 the Roman Rite had quite abandoned rood screens, although some fine examples survive.

Western ears find the traditional chant of the Roman Rite, known as Gregorian chant, less ornate than that of the Eastern rites: except in such pieces as the graduals and alleluias; it eschews the lengthy melismata of Coptic Christianity, and, being entirely monophonic, it has nothing of the dense harmonies of present-day chanting in the Russian and Georgian churches. However, when Western Europe adopted polyphony, the music of the Roman Rite did become very elaborate and lengthy. While the choir sang one part of the Mass, the priest said that part quickly, and quietly, to himself and continued with other parts; or he was directed by the rubrics to sit and wait for the conclusion of the choir's singing. It thus became normal in the Tridentine form of the Roman Rite for the priest to sing no part of the Mass, merely speaking the words, except on special occasions and in the principal Mass in monasteries and cathedrals.