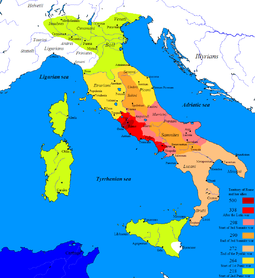 The Roman expansion in Italy; Citizenship was collectively awarded to all Italic tribes (socii) during and after the Social war by the Lex Julia, Lex Plautia Papiria and Lex Pompeia;[1] All of Cisalpine Gaul received full citizenship in 49 BCE by the Lex Roscia.[1]

Citizenship in ancient Rome was a privileged political and legal status afforded to free individuals with respect to laws, property, and governance.

In the Roman Republic and later in the Roman Empire, people residing within the Roman state could roughly be divided into several classes:

The rights available to individual citizens of Rome varied over time, according to their place of origin, and their service to the state. They also varied under Roman law according to the classification of the individual within the state. Various legal classes were defined by the various combinations of legal rights that each class enjoyed. However, the possible rights available to citizens with whom Roman law addressed were: 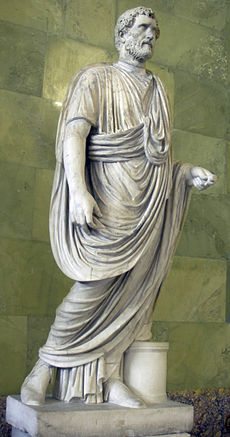 The toga was the characteristic garment of the Roman male citizen, and statues of emperors (here Antoninus Pius) frequently depict them togate (togatus).

Roman citizenship was required in order to enlist in the Roman legions, but this was sometimes ignored. Citizen soldiers could be beaten by the centurions and senior officers for reasons related to discipline. Non-citizens joined the Auxilia and gained citizenship through service.

The legal classes varied over time, however the following classes of legal status existed at various times within the Roman state:

The Latini were a class of citizens who held the Latin Rights (ius Latii), or the rights of ius commercii and ius migrationis, but not the ius connubii. The term Latini originally referred to the Latins, citizens of the Latin League who came under Roman control at the close of the Latin War, but eventually became a legal description rather than a national or ethnic one. Freedmen slaves, those of the Cives Romani convicted of crimes, or citizens settling Latin colonies could be given this status under the law.

Socii or Foederati were citizens of states which had treaty obligations with Rome, under which typically certain legal rights of the state's citizens under Roman law were exchanged for agreed levels of military service, i.e. the Roman magistrates had the right to levy soldiers for the Roman legions from those states. However, Foederati states that had at one time been conquered by Rome were exempt from payment of tribute to Rome due to their treaty status.

Growing dissatisfaction with the rights afforded to the Socii, and with the growing manpower demands of the legions (due to the protracted Jugurthine War and the Cimbrian War) led eventually to the Social War of 91–88 BC in which the Italian allies revolted against Rome.

The Lex Julia (in full the Lex Iulia de Civitate Latinis Danda), passed in 90 BC, granted the rights of the cives Romani to all Latini and socii states that had not participated in the Social War, or who were willing to cease hostilities immediately. This was extended to all the Italian socii states when the war ended (except for Gallia Cisalpina), effectively eliminating socii and Latini as legal and citizenship definitions.

A Peregrinus (plural Peregrini) was originally any person who was not a full Roman citizen, that is someone who was not a member of the Cives Romani. With the expansion of Roman law to include more gradations of legal status, this term became less used, but the term peregrini included those of the latini, socii, and provinciales, as well as those subjects of foreign states.

Citizenship as a tool of Romanization

Roman citizenship was also used as a tool of foreign policy and control. Colonies and political allies would be granted a "minor" form of Roman citizenship, there being several graduated levels of citizenship and legal rights (the Latin Right was one of them). The promise of improved status within the Roman "sphere of influence", and the rivalry with one's neighbours for status, kept the focus of many of Rome's neighbours and allies centered on the status quo of Roman culture, rather than trying to subvert or overthrow Rome's influence.

The granting of citizenship to allies and the conquered was a vital step in the process of Romanization. This step was one of the most effective political tools and (at that point in history) original political ideas (perhaps one of the most important reasons for the success of Rome).

Previously Alexander the Great had tried to "mingle" his Greeks with the Persians, Egyptians, Syrians, etc. in order to assimilate the people of the conquered Persian Empire, but after his death this policy was largely ignored by his successors. The idea was to assimilate, to turn a defeated and potentially rebellious enemy (or his sons) into a Roman citizen. Instead of having to wait for the unavoidable revolt of a conquered people (a tribe or a city-state) like Sparta and the conquered Helots, Rome tried to make those under its rule feel that they had a stake in the system.

The Edict of Caracalla

The Edict of Caracalla (officially the Constitutio Antoniniana (Latin: "Constitution [or Edict] of Antoninus") was an edict issued in AD 212 by the Roman Emperor Caracalla, which declared that all free men in the Roman Empire were to be given full Roman citizenship and all free women in the Empire were given the same rights as Roman women. Before 212, for the most part only inhabitants of Italia held full Roman citizenship. Colonies of Romans established in other provinces, Romans (or their descendants) living in provinces, the inhabitants of various cities throughout the Empire, and a few local nobles (such as kings of client countries) also held full citizenship. Provincials, on the other hand, were usually non-citizens, although some held the Latin Right.