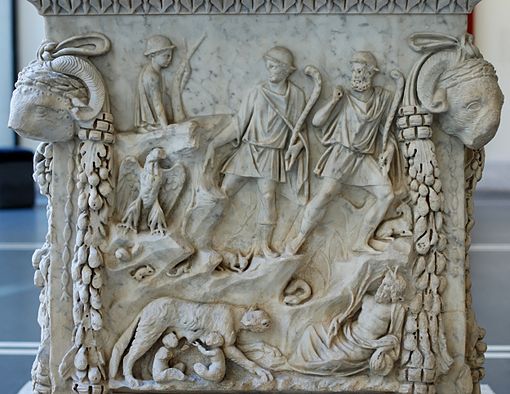 Romulus and Remus, the Lupercal, Father Tiber, and the Palatine on a relief from a pedestal dating to the reign of Trajan (AD 98–117)

Roman mythology is the body of traditional stories pertaining to ancient Rome's legendary origins and religious system, as represented in the literature and visual arts of the Romans. "Roman mythology" may also refer to the modern study of these representations, and to the subject matter as represented in the literature and art of other cultures in any period.

The Romans usually treated their traditional narratives as historical, even when these have miraculous or supernatural elements. The stories are often concerned with politics and morality, and how an individual's personal integrity relates to his or her responsibility to the community or Roman state. Heroism is an important theme. When the stories illuminate Roman religious practices, they are more concerned with ritual, augury, and institutions than with theology or cosmogony.[1]

The study of Roman religion and myth is complicated by the early influence of Greek religion on the Italian peninsula during Rome's protohistory, and by the later artistic imitation of Greek literary models by Roman authors. In matters of theology, the Romans were curiously eager to identify their own gods with those of the Greeks (interpretatio graeca), and to reinterpret stories about Greek deities under the names of their Roman counterparts.[2] Rome's early myths and legends also have a dynamic relationship with Etruscan religion, less documented than that of the Greeks.

While Roman mythology may lack a body of divine narratives as extensive as that found in Greek literature,[3] Romulus and Remus suckling the she-wolf is as famous as any image from Greek mythology except for the Trojan Horse.[4] Because Latin literature was more widely known in Europe throughout the Middle Ages and into the Renaissance, the interpretations of Greek myths by the Romans often had the greater influence on narrative and pictorial representations of "classical mythology" than Greek sources. In particular, the versions of Greek myths in Ovid's Metamorphoses, written during the reign of Augustus, came to be regarded as canonical.

The nature of Roman myth 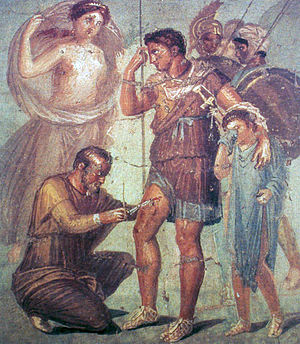 In this wall painting from Pompeii, Venus looks on while the physician Iapyx tends to the wound of her son, Aeneas; the tearful boy is her grandson Ascanius, also known as Iulus, legendary ancestor[citation needed] of Julius Caesar and the Julio-Claudian dynasty

Because ritual played the central role in Roman religion that myth did for the Greeks, it is sometimes doubted that the Romans had much of a native mythology. This perception is a product of Romanticism and the classical scholarship of the 19th century, which valued Greek civilization as more "authentically creative."[5] From the Renaissance to the 18th century, however, Roman myths were an inspiration particularly for European painting.[6] The Roman tradition is rich in historical myths, or legends, concerning the foundation and rise of the city. These narratives focus on human actors, with only occasional intervention from deities but a pervasive sense of divinely ordered destiny. In Rome's earliest period, history and myth have a mutual and complementary relationship.[7] As T.P. Wiseman notes:

The Roman stories still matter, as they mattered to Dante in 1300 and Shakespeare in 1600 and the founding fathers of the United States in 1776. What does it take to be a free citizen? Can a superpower still be a republic? How does well-meaning authority turn into murderous tyranny?[6]

Major sources for Roman myth include the Aeneid of Vergil and the first few books of Livy's history as well as Dionysius' s Roman Antiquities. Other important sources are the Fasti of Ovid, a six-book poem structured by the Roman religious calendar, and the fourth book of elegies by Propertius. Scenes from Roman myth also appear in Roman wall painting, coins, and sculpture, particularly reliefs.

The Aeneid and Livy's early history are the best extant sources for Rome's founding myths. Material from Greek heroic legend was grafted onto this native stock at an early date. The Trojan prince Aeneas was cast as husband of Lavinia, daughter of King Latinus, patronymical ancestor of the Latini, and therefore through a convoluted revisionist genealogy as forebear of Romulus and Remus. By extension, the Trojans were adopted as the mythical ancestors of the Roman people.[8] 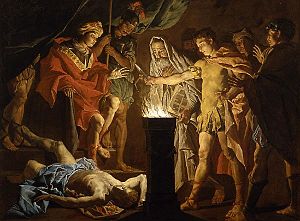 The characteristic myths of Rome are often political or moral, that is, they deal with the development of Roman government in accordance with divine law, as expressed by Roman religion, and with demonstrations of the individual's adherence to moral expectations (mos maiorum) or failures to do so.

Divine narrative played a more important role in the system of Greek religious belief than among the Romans, for whom ritual and cult were primary. Although Roman religion was not based on scriptures and exegesis, priestly literature was one of the earliest written forms of Latin prose.[14] The books (libri) and commentaries (commentarii) of the College of Pontiffs and of the augurs contained religious procedures, prayers, and rulings and opinions on points of religious law.[15] Although at least some of this archived material was available for consultation by the Roman senate, it was often occultum genus litterarum,[16] an arcane form of literature to which by definition only priests had access.[17] Prophecies pertaining to world history and Rome's destiny turn up fortuitously at critical junctures in history, discovered suddenly in the nebulous Sibylline books, which according to legend were purchased by Tarquin the Proud in the late 6th century BC from the Cumaean Sibyl. Some aspects of archaic Roman religion were preserved by the lost theological works of the 1st-century BC scholar Varro, known through other classical and Christian authors. 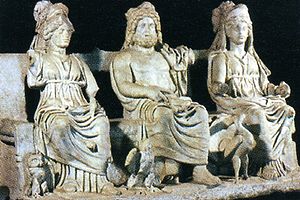 At the head of the earliest pantheon were the so-called Archaic Triad of Jupiter, Mars, and Quirinus, whose flamens were of the highest order, and Janus and Vesta. According to tradition, the founder of Roman religion was Numa Pompilius, the Sabine second king of Rome, who was believed to have had as his consort and adviser a Roman goddess or nymph of fountains and prophecy, Egeria. The Etruscan-influenced Capitoline Triad of Jupiter, Juno and Minerva later became central to official religion, replacing the Archaic Triad — an unusual example within Indo-European religion of a supreme triad formed of two female deities and only one male. The cult of Diana was established on the Aventine Hill, but the most famous Roman manifestation of this goddess may be Diana Nemorensis, owing to the attention paid to her cult by J.G. Frazer in the mythographical classic The Golden Bough.

The gods represented distinctly the practical needs of daily life, and they were scrupulously accorded the rites and offerings considered proper. Early Roman divinities included a host of "specialist gods" whose names were invoked in the carrying out of various specific activities. Fragments of old ritual accompanying such acts as plowing or sowing reveal that at every stage of the operation a separate deity was invoked, the name of each deity being regularly derived from the verb for the operation. Tutelary deities were particularly important in ancient Rome.

Thus, Janus and Vesta guarded the door and hearth, the Lares protected the field and house, Pales the pasture, Saturn the sowing, Ceres the growth of the grain, Pomona the fruit, and Consus and Ops the harvest. Even the majestic Jupiter, the ruler of the gods, was honored for the aid his rains might give to the farms and vineyards. In his more encompassing character he was considered, through his weapon of lightning, the director of human activity and, by his widespread domain, the protector of the Romans in their military activities beyond the borders of their own community. Prominent in early times were the gods Mars and Quirinus, who were often identified with each other. Mars was a god of war; he was honored in March and October. Quirinus is thought by modern scholars to have been the patron of the armed community in time of peace.

The 19th-century scholar Georg Wissowa[18] thought that the Romans distinguished two classes of gods, the di indigetes and the di novensides or novensiles: the indigetes were the original gods of the Roman state, their names and nature indicated by the titles of the earliest priests and by the fixed festivals of the calendar, with 30 such gods honored by special festivals; the novensides were later divinities whose cults were introduced to the city in the historical period, usually at a known date and in response to a specific crisis or felt need. Arnaldo Momigliano and others, however, have argued that this distinction cannot be maintained.[19] During the war with Hannibal, any distinction between "indigenous" and "immigrant" gods begins to fade, and the Romans embraced diverse gods from various cultures as a sign of strength and universal divine favor.[20] 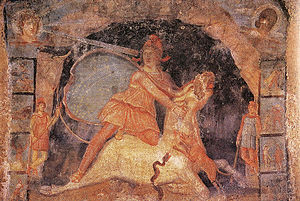 Mithras in a Roman wall painting

The absorption of neighboring local gods took place as the Roman state conquered the surrounding territory. The Romans commonly granted the local gods of the conquered territory the same honors as the earlier gods of the Roman state religion. In addition to Castor and Pollux, the conquered settlements in Italy seem to have contributed to the Roman pantheon Diana, Minerva, Hercules, Venus, and deities of lesser rank, some of whom were Italic divinities, others originally derived from the Greek culture of Magna Graecia. In 203 BC, the cult object embodying Cybele was brought from Pessinus in Phrygia and welcomed with due ceremony to Rome, centuries before the territory was annexed formally. Both Lucretius and Catullus, poets contemporary in the mid-1st century BC, offer disapproving glimpses of her wildly ecstatic cult.

In some instances, deities of an enemy power were formally invited through the ritual of evocatio to take up their abode in new sanctuaries at Rome.

Communities of foreigners (peregrini) and former slaves (libertini) continued their own religious practices within the city. In this way Mithras came to Rome and his popularity within the Roman army spread his cult as far afield as Roman Britain. The important Roman deities were eventually identified with the more anthropomorphic Greek gods and goddesses, and assumed many of their attributes and myths.