The Romanian Greek Catholic Church or Romanian Church United with Rome, Greek-Catholic (Romanian: Biserica Română Unită cu Roma, Greco-Catolică) is a sui iuris Eastern Catholic Church, in full union with the Roman Catholic Church. It has the rank of a Major Archiepiscopal Church and it uses the Byzantine liturgical rite in the Romanian language.

Since 1994, Cardinal Lucian Mureșan, Archbishop of Făgăraș and Alba Iulia serves as head of the Romanian Greek-Catholic Church. On December 16, 2005, as the Romanian Church United with Rome, Greek-Catholic was elevated to the rank of a Major Archiepiscopal Church by Benedict XVI, Lucian Mureșan became its first Major Archbishop. Mureşan was eventually created a cardinal, at the Consistory of February 18, 2012.

Besides the Archeparchy of Fǎgǎraș and Alba Iulia, there are five more Greek-Catholic eparchies in Romania: (Eparchy of Oradea Mare, Eparchy of Cluj-Gherla, Eparchy of Lugoj, Eparchy of Maramureș and Eparchy of Saint Basil the Great of Bucharest),[1] as well as one eparchy overseas, the Romanian Catholic Eparchy of St George's in Canton, answering directly to the Major Archbishop and the Holy See, in the United States of America and Canada.[2]

According to data published in the 2012 Annuario Pontificio, the Romanian Greek-Catholic Church had 663,807 members, 8 bishops, 1250 parishes, some 791 diocesan priests and 235 seminarians of its own rite at the end of 2012.[3] However, according to the 2011 Romanian government census, the number of its followers living in Romania was as low as 150,593, of which 124,563 are ethnic Romanians.[4] The dispute over this figure is mentioned in the United States Department of State report on religious freedom in Romania.[5]

In addition, there are five other Catholic dioceses in Romania, belonging to the Latin Church, whose members are more numerous. 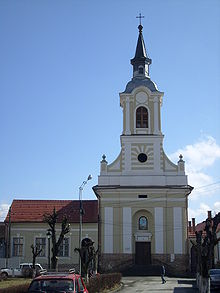 The Greek-Catholic Church in Mediaş, built by bishop Ioan Bob

Following the Habsburg conquest of Transylvania in 1687, Metropolitan Atanasie Anghel entered into full communion with the See of Rome by the Act of Union of 1698, that was formalized by a synod of bishops on September 4, 1700.[6]

By entering into the Union, Atanasie and the other bishops, along with their respective dioceses accepted the supreme authority of the Pope, while at the same time being granted the right to keep their own Greek Byzantine liturgical rite. A Diploma issued by the Emperor Leopold I declared that Transylvania's Romanian Orthodox Church is one with the Roman Catholic Church. Transylvanian Romanians were therefore encouraged to convert to Catholicism and join the newly created Greek-Catholic Church, while being able to retain the Byzantine rite, if at the same time they accepted four doctrinal points promulgated by the Council of Florence (1431 and 1445): the supreme authority of the Pope over the entire church; the existence of Purgatory; the Filioque clause; and the validity of the use of unleavened bread in the celebration of the Eucharist in the Latin Church (Eastern Orthodox had contended that Roman Catholic use of unleavened bread was erroneous).

The step undertaken by Metropolitan Atanasie Anghel and his Holy Synod obtained for the ethnic Romanians of Transylvania (then a vassal to the Habsburg Empire) equal rights with those of the other Transylvanian nations, which were part of the Unio Trium Nationum: (the Hungarian nobility, the Transylvanian Saxons and the Székely). This event coincided with the arrival of the Jesuits in Transylvania, who attempted to align this province more closely with Western Europe. However, most of Romanians were not willing to convert,[7] and this in turn led to the formation of Romanian Orthodox movements that advocated for freedom of worship for the entire Transylvanian population – most notable the movements led by Visarion Sarai, Nicolae Oprea Miclăuş and Sofronie of Cioara, under the influence of the dominant Serbian Church.

In 1721, the Bishop's Residence was moved from Alba Iulia to Făgăraș, and eventually to Blaj (1737). Following this change, Blaj became a center of learning and national awakening for all Romanians[citation needed].[8]

Additional Greek-Catholic Eparchies were eventually set up at Oradea (1777), as well as Gherla and Lugoj (1853); Blaj, under the title of Eparchy of Alba Iulia and Făgăraș, became the Metropolitan (i.e. Archiepiscopal) See. On December 16, 2005, the Romanian Greek-Catholic Church was elevated to the rank of Major Archiepiscopal Church. 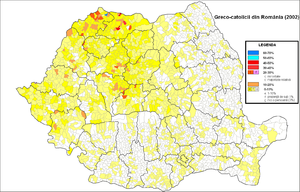 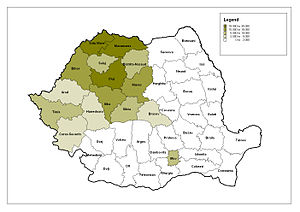 Greek-Catholic presence, according to the 2002 census[10] 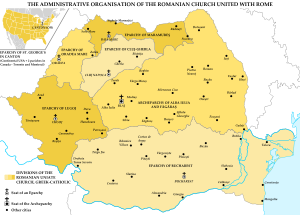 Iuliu Hossu, Bishop of Cluj, turned down a proposal of the Romanian Orthodox Patriarch, Iustinian Marina, to convert to Orthodoxy and be named Orthodox Archbishop of Iaşi and metropolitan of Moldavia, and thereby become the official successor of the Romanian Orthodox Patriarch himself. Consequently, Hossu remained under house arrest. Year after year, he sent Memorandums to the President of the Republic, requesting that the country's laws and international agreements be observed with regard to the Romanian Greek-Catholic Church. In 1969, Pope Paul VI asked Hossu to accept an appointment to the cardinalate. As Hossu was reluctant to leave his people, the Pope created him a Cardinal only "in pectore", i.e. without publishing the fact, that was only revealed on March 5, 1973, three years after Bishop Hossu's death.[11]

Another remarkable Romanian Greek-Catholic ecclesiastic of the time was Alexandru Todea (1912–2002). Secretly (in pectore) consecrated as a titular bishop on 19 November 1950, he was arrested and the following year he received a sentence of life in prison. He was granted amnesty in 1964. On March 14, 1990, after the fall of the Communist regime, he was appointed Archbishop of Făgăraș and Alba Iulia, and was created a Cardinal the following year.[12]

After more than 40 years of clandestine existence, the Romanian Church United with Rome, Greek-Catholic re-emerged publicly, in the wake of the Romanian Revolution. Normative act 9/31, passed on 31 December 1989, repealed Decree 358/1948 (that outlawed the Greek-Catholic Church) as repugnant and bringing grave prejudice upon the Romanian State.

Only after much struggle and considerable delays, some of the Church's properties, in particular the cathedrals of Cluj, Blaj, Lugoj and Oradea, were restored to their rightful owner. However, much of the original property remains in Romanian Orthodox or government hands, as the persecution started in 1948 has led to a marked reduction in the numbers of Romanian Greek Catholic faithful. After 40 years of Communist rule and forced assimilation into the regime-approved Orthodox Church, numerous Romanian cradle Greek-Catholics remained in the Romanian Orthodox Church, and it is unclear how many of these nominal Orthodox members remain crypto-Catholic, especially in northern Transylvania where most Greek Catholics lived (as shown on the maps to the right). The Romanian Catholic Church United with Rome is still undergoing a process of recovery from the wounds inflicted by the Communist rulers and the forced merger.

Property issues since the fall of Communism

Immediately subject to the Holy See