The Romanian Police (Romanian: Poliția Română, pronounced [poˈlit͡si.a roˈmɨnə]) is the national police force and main civil law enforcement agency in Romania. It is subordinated to the Ministry of Administration and Interior and it is led by a General Inspector with the rank of Secretary of State.[2]

The Romanian Police are responsible for:

General Inspectorate of Romanian Police is the central unit of police in Romania, which manages, guides, supports and controls the activity of the Romanian police units, investigates and analyses very serious crimes related to organized crime, economic, financial or banking criminality, or to other crimes which make the object of the criminal cases investigated by the Prosecutor’s Office attached to the High Court of Cassation and Justice, and which has any other attributions assigned by law. 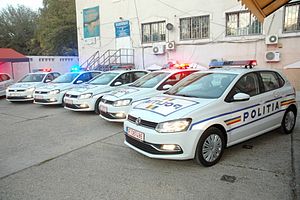 The organizational chart of General Inspectorate of Romanian Police includes general directorates, directorates, services and, offices established by the order of the Minister of Administration and Interior.

Under the command of the General Inspectorate of the Romanian Police operates a specialized intervention squad, The Independent Service of Special Interventions and Operations. 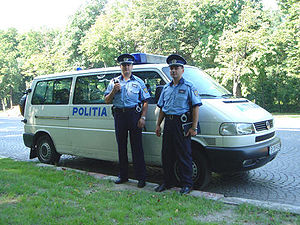 The Romanian Police is divided into 41 County Police Inspectorates, corresponding to each county (județ), and The Bucharest General Directorate of Police.

The Romanian Police has, altogether, roughly 9,500 intervention vehicles.[4] The fleet is mostly comprised by Dacia Logans and various Volkswagen vehicles. Mercedes Vito is yet another model in use, used by the special forces, border police and others. The Road/Traffic Police also has BMWs, Seat and Lotus vehicles, used for road chasing.[5]

The police also uses helicopters for air surveillance and immediate response.[6] The most common manufacturer is Eurocopter.

A policeman on duty carries a side gun (usually a Pistol Carpați Md. 1974, Makarov PM or Glock semi-automated weapon), a pair of handcuffs, an expandable baton, a radio communication device and identification.

Before 2002, the National Police had military status and a military ranking system (see Romanian Armed Forces ranks and insignia). In June 2002 it became a civilian police force (the first police service in Eastern Europe to do so) and its personnel was structured into two corps: