From Infogalactic: the planetary knowledge core
Jump to: navigation, search
For other uses, see Romanization (disambiguation). 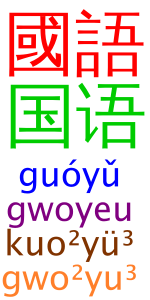 Languages can be romanized in a number of ways, as shown here with Mandarin Chinese

Romanization or Latinization (or romanisation, latinisation: see spelling differences), in linguistics, is the conversion of writing from a different writing system to the Roman (Latin) script, or a system for doing so. Methods of romanization include transliteration, for representing written text, and transcription, for representing the spoken word, and combinations of both. Transcription methods can be subdivided into phonemic transcription, which records the phonemes or units of semantic meaning in speech, and more strict phonetic transcription, which records speech sounds with precision.

There are many consistent or standardized romanization systems. They can be classified by their characteristics. A particular system’s characteristics may make it better-suited for various, sometimes contradictory applications, including document retrieval, linguistic analysis, easy readability, faithful representation of pronunciation.

If the romanization attempts to transliterate the original script, the guiding principle is a one-to-one mapping of characters in the source language into the target script, with less emphasis on how the result sounds when pronounced according to the reader's language. For example, the Nihon-shiki romanization of Japanese allows the informed reader to reconstruct the original Japanese kana syllables with 100% accuracy, but requires additional knowledge for correct pronunciation.

Most romanizations are intended to enable the casual reader who is unfamiliar with the original script to pronounce the source language reasonably accurately. Such romanizations follow the principle of phonemic transcription and attempt to render the significant sounds (phonemes) of the original as faithfully as possible in the target language. The popular Hepburn romanization of Japanese is an example of a transcriptive romanization designed for English speakers.

A phonetic conversion goes one step further and attempts to depict all phones in the source language, sacrificing legibility if necessary by using characters or conventions not found in the target script. In practice such a representation almost never tries to represent every possible allophone—especially those that occur naturally due to coarticulation effects—and instead limits itself to the most significant allophonic distinctions. The International Phonetic Alphabet is the most common system of phonetic transcription.

For most language pairs, building a usable romanization involves tradeoffs between the two extremes. Pure transcriptions are generally not possible, as the source language usually contains sounds and distinctions not found in the target language, but which must be shown for the romanized form to be comprehensible. Furthermore, due to diachronic and synchronic variance no written language represents any spoken language with perfect accuracy and the vocal interpretation of a script may vary by a great degree among languages. In modern times the chain of transcription is usually spoken foreign language, written foreign language, written native language, spoken (read) native language. Reducing the number of those processes, i.e. removing one or both steps of writing, usually leads to more accurate oral articulations. In general, outside a limited audience of scholars romanizations tend to lean more towards transcription. As an example, consider the Japanese martial art 柔術: the Nihon-shiki romanization zyûzyutu may allow someone who knows Japanese to reconstruct the kana syllables じゅうじゅつ, but most native English speakers or rather readers would find it easier to guess the pronunciation from the Hepburn version, jūjutsu.

The below listing may be incomplete, see also Category:Romanization

The Arabic alphabet is used to write Arabic, Persian, Urdu and Pashto as well as numerous other languages in the Muslim world, particularly African and Asian languages without alphabets of their own. Romanization standards include the following:

There are romanization systems for both Modern and Ancient Greek.

The Brahmic family of abugidas is used for languages of the Indian subcontinent and south-east Asia. There is a long tradition in the west to study Sanskrit and other Indic texts in Latin transliteration. Various transliteration conventions have been used for Indic scripts since the time of Sir William Jones.[13]

Hindustani is an Indo-Aryan language with extreme digraphia and diglossia resulting from the Hindi–Urdu controversy starting in the 1800s. Technically, Hindustani itself is recognized by neither the language community nor any governments. Two standardized registers, Standard Hindi and Standard Urdu, are recognized as official languages in India and Pakistan. However, in practice the situation is,

The digraphia renders any work in either script largely inaccessible to users of the other script, though otherwise Hindustani is a perfectly mutually intelligible language, essentially meaning that any kind of text-based open source collaboration is impossible among devanagari and nastaʿlīq readers.

Initiated in 2011, the Hamari Boli Initiative[16] is a full-scale open-source language planning initiative aimed at Hindustani script, style, status & lexical reform and modernization. One of primary stated objectives of Hamari Boli is to relieve Hindustani of the crippling devanagari–nastaʿlīq digraphia by way of romanization.[17]

Romanization of the Sinitic languages, particularly Mandarin, has proved a very difficult problem, although the issue is further complicated by political considerations. Because of this, many romanization tables contain Chinese characters plus one or more romanizations or Zhuyin.

Romanization (or, more generally, Roman letters) is called "rōmaji" in Japanese. The most common systems are:

While romanization has taken various and at times seemingly unstructured forms, some sets of rules do exist:

Several problems with MR led to the development of the newer systems:

Almost all Languages of the Philippines (including Tagalog, Ilokano, the Bicol languages, Cebuano and other Visayan languages, Kapampangan, and the Spanish-based creole Chavacano) use the Modern Filipino Alphabet.

When Spain colonised the Philippines in the late 16th century, the numerous languages of the Philippines were written in various scripts, such as Baybayin. These were initially promoted by the colonists but later replaced by Spanish transcriptions, which are still evident in place names and surnames. Letters such as C, Ll, and Ñ were considered Hispanic additions and removed in the Abakada, an attempt at a more indigenous alphabet devised by Lope K. Santos in 1940. These were eventually superseded by the Pilipino Alphabet and by the 28-letter, Modern Filipino Alphabet, which adds Ñ and the native Ng to the standard, 26-letter Latin alphabet.

While the Spanish language itself uses a very phonemic spelling, the romanised spelling created for Philippine languages is even more so. For example, the Spanish caballo ([kaˈβa.ʎo], "horse"), the same word in Tagalog is kabayo (demonstrating yeismo in the pronunciation of the Spanish "Ll" digraph).

Thai, spoken in Thailand and some areas of Laos, Burma and China, is written with its own script, probably descended from mixture of Tai–Laotian and Old Khmer, in the Brahmic family.

In English language library catalogues, bibliographies, and most academic publications, the Library of Congress transliteration method is used worldwide.

In linguistics, scientific transliteration is used for both Cyrillic and Glagolitic alphabets. This applies to Old Church Slavonic, as well as modern Slavic languages that use these alphabets.

A system based on scientific transliteration and ISO/R 9:1968 was considered official in Bulgaria since the 1970s. Since the late 1990s, Bulgarian authorities have switched to a new system avoiding the use of diacritics and optimized for compatibility with English. This system became mandatory for public use with a law passed in 2009.[30] Where the old system uses <č,š,ž,št,j,ă>, the new system uses <ch,sh,zh,sht,y,a>.

There is no single universally accepted system of writing Russian using the Latin script—in fact there are a huge number of such systems: some are adjusted for a particular target language (e.g. German or French), some are designed as a librarian's transliteration, some are prescribed for Russian travellers' passports; the transcription of some names is purely traditional.   All this has resulted in great reduplication of names.   E.g. the name of the Russian composer Tchaikovsky may also be written as Tchaykovsky, Tchajkovskij, Tchaikowski, Tschaikowski, Czajkowski, Čajkovskij, Čajkovski, Chajkovskij, Çaykovski, Chaykovsky, Chaykovskiy, Chaikovski, Tshaikovski, Tšaikovski, Tsjajkovskij etc. Systems include:

The chart below shows the most common phonemic transcription romanization used for several different alphabets. While it is sufficient for many casual users, there are multiple alternatives used for each alphabet, and many exceptions. For details, consult each of the language sections below. (Hangul characters are broken down into jamo components.)