The Project 633 class (known in the West by its NATO reporting name as the Romeo class) is a class of Soviet diesel-electric submarine, built in the 1950s. At the end of World War II, the Soviets obtained several German Type XXIs, from which they were able to obtain certain key technologies. These technologies assisted in the design of the Zulu- and Whiskey-class. Further improvements on the design led to the Romeo class, which was designed by Lazurit Central Design Bureau ("Lazurit" is the Russian word for lazurite).

Only 20 of the Soviet Union's originally intended 56 were completed between October 1957 and the end of December 1961[1] because of the introduction of the nuclear submarine into the Soviet Navy.

By today's standards Romeo class submarines are considered obsolete, but they still have some value as training and surveillance vessels.

Chinese Type 033 Romeo-class and its variants 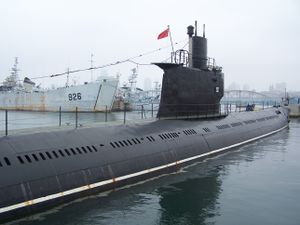 Under the 1950 Sino-Soviet Friendship and Mutual Assistance Treaty, the Soviets passed to China (and later to North Korea) the documentation necessary to produce Romeo submarines in 1963.[1] The Chinese variant is known as the Type 033 Romeo. A total of 84 Type 033 submarines were built in China from 1962 to 1984, plus several exported to other countries. The Chinese Type 033 incorporated some improvements over the original Romeo, including noise reduction of 20 dB. Sonar on board was also continuously upgraded: the original Soviet sonar was first replaced by domestic Chinese Type 105 sonar, which consequently was replaced by H/SQ2-262A sonar built by No. 613 Factory. Today most of the Type 033 subs have been retired or preserved, with a few remaining in service for training purposes.[2] A total of six Chinese Romeo class submarine variants were developed:

The Encyclopedia Of Warships, From World War 2 To The Present Day, General Editor Robert Jackson.