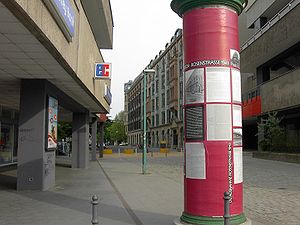 The Rosenstraße today: the building in which the detainees were held no longer exists. A rose colored Litfaß column commemorates the event.

The Rosenstrasse protest was a nonviolent protest in Rosenstraße ("Rose street") in Berlin in February and March 1943, carried out by the non-Jewish ("Aryan") wives and relatives of Jewish men who had been arrested for deportation. The protests escalated until the men were released. It was a significant instance of opposition to the events of the Holocaust.

Just after the German defeat in the Battle of Stalingrad, the Gestapo had arrested the last of the Jews in Berlin during the Fabrikaktion. Around 1,800 Jewish men, almost all of them married to non-Jewish women (others being the so-called Geltungsjuden), were separated from the other 6,000 of the arrested, and housed temporarily at Rosenstraße 2–4, a welfare office for the Jewish community located in central Berlin.

The 1,800 men were so-called "privileged Jews", a category exempt from deportation and other anti-Jewish measures by reason of being married to German spouses or employment as officials of the Reichsvereinigung der Juden in Deutschland, the Jewish organisation officially recognised by the German government for the purpose of controlling the Jewish population.

The building on Rosenstraße, near Alexanderplatz, in which the men were held, was destroyed during an Allied bombing of Berlin at the end of the war. The original Rosenstraße location is now marked by a rose colored Litfaß column 2–3 meters high, dedicated to the demonstration. Information about this event is posted on the Litfaß column.

In the mid-1980s, Ingeborg Hunzinger, an East German sculptor, created a memorial to those women who took part in the Rosenstraße Protest. The memorial, named "Block der Frauen" (Block of Women), was erected in 1995 in a park not far from the site of the protest. The sculpture shows protesting and mourning women, and an inscription on the back reads: "The strength of civil disobedience, the vigor of love overcomes the violence of dictatorship; Give us our men back; Women were standing here, defeating death; Jewish men were free."

The events of the Rosenstraße protests were made into a film in 2003 by Margarethe von Trotta under the title Rosenstraße.