From Infogalactic: the planetary knowledge core
Jump to: navigation, search
This article is about the city in Southern Russia. For the city in Yaroslav Oblast, see Rostov.

Establishment to the early 20th century

From ancient times, the area around the mouth of the Don River has held cultural and commercial importance. Ancient indigenous inhabitants included the Scythian, Sarmat, and Savromat tribes. It was the site of Tanais, an ancient Greek colony, Fort Tana, under the Genoese and Fort Azak in the time of the Ottoman Empire.

In 1749, a custom house was established on the Temernik River, a tributary of the Don, by edict of Empress Elizabeth, the daughter of Peter the Great,[13] in order to control trade with Turkey.[citation needed] It was co-located with a fortress named for Dimitry of Rostov, a metropolitan bishop of the old northern town of Rostov the Great. Azov, a town closer to the Sea of Azov on the Don, gradually lost its commercial importance in the region to the new fortress.

In 1756, the "Russian commercial and trading company of Constantinople" was founded at the "merchants' settlement" (Kupecheskaya Sloboda) on the high bank of the Don. Towards the end of the eighteenth century, with the incorporation of previously Ottoman Black Sea territories into the Russian Empire, the settlement lost much of its militarily strategic importance as a frontier post.

In 1796, the settlement was chartered and in 1797, it became the seat of Rostovsky Uyezd within Novorossiysk Governorate.[13] In 1806, it was officially renamed Rostov-on-Don.[13] During the 19th century, due to its river connections with Russia's interior, Rostov developed into a major trade center and communications hub. A railway connection with Kharkiv was competed in 1870, with further links following in 1871 to Voronezh and in 1875 to Vladikavkaz.

Concurrent with improvements in communications, heavy industry developed. Coal from the Donets Basin and iron ore from Krivoy Rog supported the establishment of an iron foundry in 1846. In 1859, the production of pumps and steam boilers began. Industrial growth was accompanied by a rapid increase in population, with 119,500 residents registered in Rostov by the end of the nineteenth century along with approximately 140 industrial businesses. The harbor was one of the largest trade hubs in southern Russia, especially for the export of wheat, timber, and iron ore.

In 1779, Rostov-on-Don became associated with a settlement of Armenian refugees from the Crimea at Nakhichevan-on-Don The two settlements were separated by a field of wheat. In 1928, the two towns were merged. The former town border lies beneath the Teatralnaya Square of central Rostov-on-Don. By 1928, following the incorporation of the hitherto neighboring city of Nakhichevan-on-Don, Rostov had become the third largest city in Russia.

In the early 20th century, epidemics of cholera during the summer months were not uncommon. 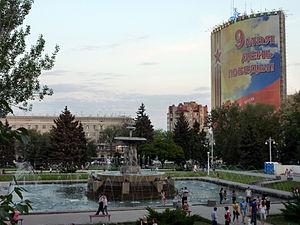 A fountain in the Park of Revolution

During the Russian Civil War, the Whites and the Reds contested Rostov-on-Don, then the most heavily industrialized city of South Russia. By 1928, the regional government had moved from the old Cossack capital of Novocherkassk to Rostov-on-Don.

During World War II, German forces occupied Rostov-on-Don, at first for seven days from November 21, 1941 after attacks by the German First Panzer Army in the battle of Rostov and then for seven months from July 24, 1942 to February 14, 1943. The town was of strategic importance as a railway junction and a river port accessing the Caucasus, a region rich in oil and minerals. It took ten years to restore the city from the damage during World War II. 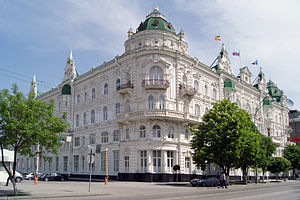 Albert Parry, born in 1901 in Rostov-on-Don, wrote of the summers of his childhood:

There were sultry days of brassy sun, but also cool evenings on the balconies facing the Don River, with the soft glow of charcoal in the samovar, with the ripe cherries crushed by your spoon against the bottom and sides of your glass of scalding tea.[18] 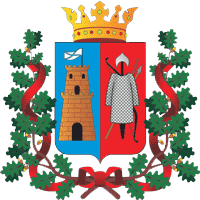 Coat of arms of Rostov-on-Don

In December 1996, Rostov-on-Don adopted a coat of arms, a flag and a mayoral decoration as the symbols of the town. The first coat of arms of Rostov-on-Don was designed in 1811 and approved by the Tsar. In 1904, some changes were made. One lasting oil painting of the coat-of-arms is kept in the regional local history museum but its accuracy and authenticity is uncertain. In June 1996, the Rostov-on-Don City Duma adopted a variant of the coat-of-arms in which a tower represents the St. Dimitry Rostovsky Fortress. The ancient Russian arms reference the role Rostov played in the defense of Russia's borders. The coat-of-arms adorns the mayor's decoration but all other cases of its use are first considered for approval by the City Duma. 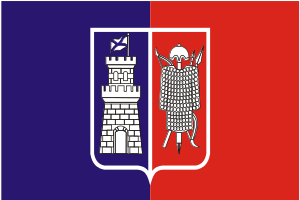 The flag of Rostov-on-Don was approved by the Duma on September 20, 1864. At the end of the 19th and beginning of the 20th centuries the home guard regiments, which defended the Southern borders of Russia, were raised under this flag.[citation needed] The "Flag of Rostov" is kept in the town's municipal building under glass. Its length is 1,370 millimeters (54 in) and width, 850 millimeters (33 in). The flag is taken out of the building only on Victory Day and Rostov-on-Don Day by a guard of honor.[citation needed]

In 1870, an oval shape mayoral decoration wrought from precious or semi-precious white metal was introduced. On the front is written "Rostov-on-Don" at the top, the Rostov-on-Don coat-of-arms is in the center and the inscription, "Mayor of the City" is written at the bottom. On its reverse side, the day of its adoption, April 9, 1996, is recorded. The decoration is worn over the suit on a large chain. The mayor returns the decoration to the Duma on his or her retirement from office.[citation needed]

The Emblem of the Don Host Oblast was introduced in July 5 (18), 1878. The flag of the All Great Don Army was introduce in May 1918 on the "Circle of the Don Saving".[citation needed] 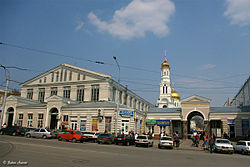 Central market near the Nativity Cathedral 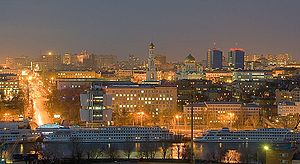 With the construction of the Volga-Don Shipping Canal in 1952, Rostov-on-Don became a port of five seas: the Black Sea, the Sea of Azov, the Caspian Sea, the White Sea, and the Baltic Sea.

In modern times, Rostov-on-Don has experienced economic growth. Numerous start-up companies have established headquarters in the city, the median income is increasing, and the city is being transformed into a modern, industrial and technology-rich hub. For instance, Rostov-on-Don is a center for helicopter and farm machinery manufacturing.[25] The "Tebodin" engineering company opened its fourth office in Rostov-on-Don in June 2010.[26] 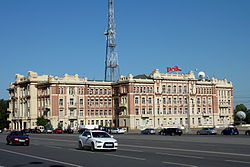 Administration building of the North-Caucasian railway

Rostov-on-Don is a major transport center. Some refer to it as the "gateway to the Caucasus".[27]

The Rostov-on-Don Airport caters for domestic travel, as well as flights to and from the former C.I.S., Europe, Africa and Asia. Its IATA code is "ROV".[28][29] Donavia airlines (formerly "Aeroflot Don") has its head office in Rostov-on-Don.[30] The Bataysk military aerodrome (which is located 5.0 miles (8.0 km) northwest of the city center) may be developed into a new airport hub for Southern Russia.

The international river port[31] specializes in the packaging and freighting of minerals and timber. Shipping information is published on line.[32][33]

Several highways of federal and regional significance cross Rostov. The M-4 “Don” route passes Rostov to the east and crosses the Don river in the Aksay city area. The “Rostov-Novoshakhtinsk” starts from the Northern housing block area of the city running north to connect with the M-4 “Don” route between Shakhty and Novoshakhtinsk. 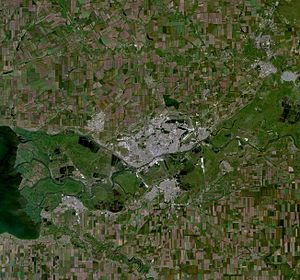 Rostov (in center) and vicinities: Bataysk to the south, Azov to the south-west, Chaltyr village to the north-west, Novocherkassk to the northeast (satellite image by Landsat-5, 2010-06-10)

The Ministry of Regional Development of Russia has prepared a program to create eight multimillion conglomerate population centres or 'super cities'. The Rostov Oblast will be one of these. “The Greater Rostov” metropolitan area will include the cities of Rostov-on-Don, Novocherkassk, Taganrog, Aksay, Bataysk and Azov.[citation needed]

In 1929, the first automatic telephone exchange in Russia with a capacity of 6,000 numbers commenced in Rostov-on-Don.[35] Since 2004, standard telephone numbers in Rostov-on-Don have been seven digits in length. Since 2009, city numbers have begun with "2"[36] The city dialing code is "863".

The largest educational establishments of the city include:

There is also is a French cultural centre (Alliance Francaise),[42] a British Council and German Goethe Institute (DAAD and Bosch foundation), and a Korean Cultural Centre. 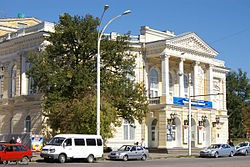 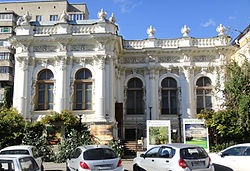 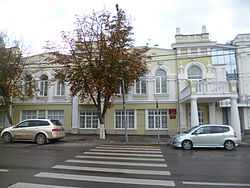 The most conspicuous architectural feature of the central part of the city is the Cathedral of Virgin's Nativity (1860–1887), designed by Konstantin Thon.

In the Academic Drama Theater named after Maxim Gorky works Mikhail Bushnov, who is the national artist of the USSR and an honorary citizen of Rostov-on-Don.[43]

The small collections of the Art Gallery and the Museum of Arts include some works by Repin, Surikov, Perov, Levitan, Aivazovsky as well as of modern Rostov artists.

Other facilities include seven stadiums, a Palace of Sports, a circus, a zoo[44] botanical gardens and parks.[45] Rostov-on-Don hosts the North Caucasian Science Center and research institutes. The city is also home to a Starbucks coffee chain, a true rarity in this geographical area of Russia.[46]

The Administration of Rostov and Novocherkassk Eparchy of the Russian Orthodox Church is located in Rostov. Other religious facilities in Rostov-on-Don are the Roman Catholic "Church of the Lord's Supper", the Old Believers' temple, a synagogue,[47] a mosque, and the Diamond Way Buddhist Center of the Karma Kagyu Tradition.[48] There are also several Armenian and Greek Orthodox churches in the city, with one of the Armenian churches being the oldest standing building in Rostov. All of the Armenian churches are in the Nakhichevan-on-Don district of the city. 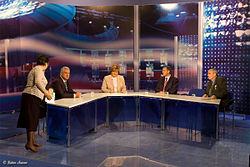 Rostov-on-Don is one of the host cities for 2018 FIFA World Cup. A huge development is planned on the left bank of the Don River, which includes a soccer stadium to host the games during the championship.

The Rostov-on-Don women's handball team plays in the Russian Handball Championship. The men's team is known as the "TIBL - Group".

Authors of Rostov-on-Don include Anton Chekhov, Mikhail Sholokhov, Zakrutkin, Fadeyev, Safronov, Kalinin, Alexander Pushkin, Maxim Gorky, Sergey Yesenin, Shushanik Kurghinian, Aleksey Nikolayevich Tolstoy, and Alexander Solzhenitsyn, Zhdanov and Mikael Nalbandian. After visiting Rostov in 1831, Pushkin published his poem "The Don". The monument to Pushkin on Pushkin Boulevard is dedicated to these events. Maxim Gorky, worked as a docker in Rostov-on-Don in his youth. Vera Panova (1905–1973) was a Soviet era writer. Modern era includes such names as Danil Korezky and Tony Vilgotsky. A monument to Aleksandr Solzhenitsyn, who lived in the city for 18 years and studied mathematics at Rostov University, is being planned by city authorities.

Actors and playwrights of Rostov-on-Don include Maretskaya, Mikhail Shchepkin, Yevgeniya Glushenko, Alexander Kaidanovsky (1946–1995), Evgeny Shvarts (1896–1958), Nikolai Sorokin (1952–2013), Konstantin Lavronenko (1961), winner of the Best Actor award at the 2007 Cannes Film Festival, and Sergey Zhigunov (1963). Marion Gering, noted for his stage and film productions in the United States, was born in the city.

Rostov-on-Don is twinned with:[51]