From Infogalactic: the planetary knowledge core
(Redirected from Round Goby)
Jump to: navigation, search

The round goby (Neogobius melanostomus) is a euryhaline bottom-dwelling goby of the family Gobiidae, native to central Eurasia including the Black Sea and the Caspian Sea. Round gobies have established large non-native populations in the Baltic Sea, several major Eurasian rivers, and the North American Great Lakes.[2]

Round gobies are small, soft-bodied fish, characterized by a distinctive black spot on the first dorsal fin. Their eyes are large and protrude slightly from the top of the head and, like most gobies, round gobies have pelvic fins that are fused to form a single disc on the belly of the fish shaped like a suction cup. Round gobies range in length from 4 to 10 inches (maximum of 9.7 inches (24.6 cm), and in weight from 0.176 ounces to 2.816 ounces, increasing as they age. Male round gobies are larger than females. Juvenile round gobies (less than one year old) are grey. Upon maturation, round gobies become mottled with gray, black, brown, and olive green markings. Adult male round gobies turn inky black during the spawning season and develop swollen cheeks. Male and female round gobies are easily differentiated through the shape of their urogenital papilla, which is white to grey, long and pointed in males, and brown, short and blunt-tipped in females.

Widespread in the Sea of Marmara and rivers of its basin. In the Black Sea and Sea of Azov along all coasts and fresh waters of their basins. In the coastal lakes and lagoons. In the rivers of Crimea and Caucasus: Mezib, Pshada, Vulan, Kodori, Çoruh. In the Caspian Sea presented by subspecies Neogobius melanostomus affinis. Since 1990 the round goby registered as introduced in the North American Great Lakes as an invasive species.[3] and different parts of Europe including the Baltic Sea. Round gobies are also rapidly expanding into tributaries of the Great Lakes in North America, and were recently discovered in at least one of the Finger Lakes in New York state (Cayuga Lake).

Round gobies are euryhaline (salt-tolerant) and are found in both freshwater and marine ecosystems. In habits the water with mineralization of 18–24%, presented in fresh waters. Rather common on shelfs with sandy and rocky bottoms with low silting, on the depth from 1–2 to 10–17 m.

Round gobies actively feed both nocturnally and diurnally, and are believed to detect prey only while stationary. The primary diet of round gobies includes mollusks, crustaceans, worms, fish eggs, zebra mussels, small fish, and insect larvae.

Adult round gobies feed mainly on mollusks and other small invertebrates (insects and amphipods) living on the bottom of lakes and streams.[2] At spring, the main items in its diet in the Sasyk Lagoon are Hydrobia, Cerastoderma, Abra.[4] In the same season near the Romanian coasts of the Black Sea the round goby feeds on polychaetes, crustaceans (Idotea balthica, Pachygrapsus marmoratus, Xantho poressa, etc.) and juvenile gobies.[5] Near Sevastopol the round goby feeds on molluscs (Mytilaster lineatus, Abra spp.), but near Karadag except molluscs (Cerastoderma, Brachiodontes) were fishes.[6]

In the Gulf of Odessa, 23 items are identified in the diet of the round goby.[7] Mytilus galloprovincialis, Setia pulcherrima, Mytilaster lineatus, Lentidium mediterraneum, Idotea balthica, and Alitta (Nereis) succinea dominate in the spring. In summer are mainly Sphaeroma pulchellum and L. mediterraneum. The mussels M. galloprovincialis and M. lineatus are important in all seasons. The polychaetes are most elected component of benthos.[clarification needed] 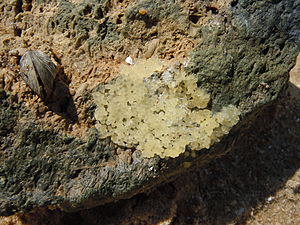 Round gobies exhibit male parental care. Females can spawn up to six times during the spawning season, which spans April to September in most areas. Males will migrate from deeper water, where overwintering occurs, into shallower breeding grounds during the beginning of the mating season. Males are territorial and will defend eggs from predators, as well as continuously fan them to provide the developing embryos with oxygenated water. This results in successful hatch rates of up to 95%. Its eggs are 4 mm by 2.2 mm in size. Female round gobies reach sexual maturity in 1 to 2 years while males do so in 3 to 4 years. Gobies in the Laurentian Great Lakes typically mature up to 1 year earlier than in their native habitat in Europe. The male releases a steroid sex pheromone that attracts females to their territory. Males also use visual displays, including posturing and changing its color from beige to black during mating season. They also produce sounds during courtship. The females deposit their eggs in male-guarded crevices between rocks. Egg clutches can contain up to 5,000 eggs. 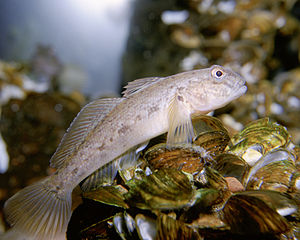 Round goby from the Great Lakes, USA

The species was accidentally introduced into the North American Great Lakes by way of ballast water transfer in cargo ships. First discovered in North America in the St. Clair River in 1990, the round goby is considered an invasive species with significant ecological and economic impact;[8] the consequences are quite complex as the fish both competes with native species and provides an abundant source of food for them while consuming other invasive species.[9] In other words, the round goby behaves much like most biological invasive controls. An aggressive fish, the round goby outcompetes native species such as the sculpin and logperch for food (such as snails and mussels), shelter and nesting sites, substantially reducing their numbers. Round gobies are also voracious predators of eggs of native fish, many important to the angling industry. The goby's robust ability to survive in degraded environmental conditions has helped to increase its competitive advantage compared to native species. Many native predatory fish such as smallmouth bass, largemouth bass, walleye, salmon and trout have begun to prey on round gobies. The incorporation of the round goby into native foodwebs, coupled with the goby's ability to consume large numbers of invasive mussels (zebra and quagga), may result in greater bioaccumulation of toxins such as PCBs higher in the food chain, since these mussels filter-feed and are known to accumulate persistent contaminants. However, this is partly beneficial because even though they do not reduce the population of zebra mussels, they do control their population. Hence, it prevents a large scale spread of the zebra mussel, which is also an invasive species in the Great Lakes.

An unintended benefit of the round goby's introduction is that the Lake Erie Watersnake, once listed as a threatened species, has found the goby to be a tasty addition to its diet. A recent study found the introduced fish now accounts for up to 90% of the snake's diet. The new food supply means that the water snake is now staging a comeback.[10] Round gobies also serve as food for a variety of predatory fishes in the Great Lakes, including bass, lake trout, lake whitefish, burbot, and walleye.

The round goby is also considered invasive in parts of Europe. The processes of invasion of the round goby in Europe were started by its introduction to the Gulf of Gdańsk (Southern Baltic Sea) in 1990.[11] Recently the cases of the round goby invasion are mentioned in the Aegean Sea,[12] in the different parts of the Baltic Sea,[13] North-Sea basin,[14] and basins of Danube and Rhine.[15][16] In the German part of the Baltic Sea this fish was first noted near the Rügen Island.[17] Now it is distributed along all south-western Baltic Sea coast includes the Stettiner Haff (Szczecin Lagoon), the Unterwarnow (Warnow river estuary), the mouth of the Trave , and in the Nord-Ostsee (Kiel) Kanal.

As of 2010, the westernmost site of the round goby occurrence in Europe is the Lower River Scheldt, the tidal zone in the river mouth, and Albert Canal, Belgium.[18] In 2011, the expansion of the round goby through the fresh waters of France is started: this species occurred in the Rhine River (on the border between France and Germany), also in the French part of the Moselle River.[19]

In total, 52 parasite species are registered in the round goby in the native area.[20] Most abundant parasites of the Black-Sea round goby are metacercariae of trematodes of Heterophyidae family, such as Cryptocotyle concavum, C. lingua, and Pygidiopsis genata.[21] The trematodes C. lingua and P. genata can infest human.[22][23] In the 1950s, along the coast of the Gulf of Taganrog (Sea of Azov) the round goby was registered as a host of epizootic of nematodes, Tetrameres fissispina and Streptocara crassicauda, which were fatal to ducklings.[24]

In the Gulf of Gdańsk, Baltic Sea, the parasite fauna of the invasive round goby consists of 12 species.[25] The core of the parasite fauna comprises two species of trematode metacercariae: C. concavum and Diplostomum spathaceum. Also, in the Baltic Sea the round goby is paratenic host of the invasive nematode Anguillicoloides crassus.[26] In the Vistula Lagoon, the most abundant parasites of the round goby are nematodes Hysterothylacium aduncum and Anguillicoloides crassus.[27]

25 species of parasites are noted in the round goby in the Great Lakes.[28][29][30][31] The trematode D. spathaceum is most abundant core species overall. Also the cestode Proteocephalus sp. and the trematode Neochasmus umbellus are rather abundant. The round goby may circumvent more of the metacercariae of N. umbellus from completing their life cycle.[32] The parasite “load” on the invasive gobies in the Great Lakes appears relatively low in comparison with their native habitats, lending support to the "enemy release hypothesis".