From Infogalactic: the planetary knowledge core
Jump to: navigation, search
This article is about the railroad shop structure. For other uses, see Roundhouse (disambiguation). 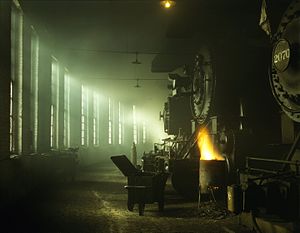 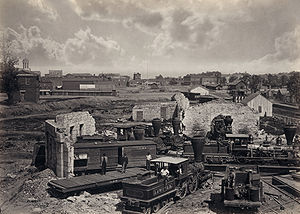 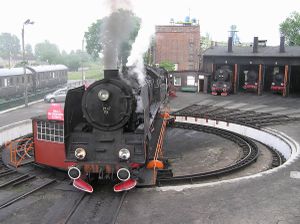 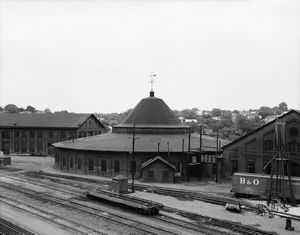 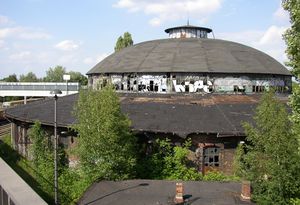 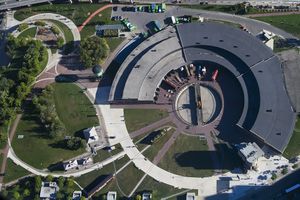 The Roundhouse viewed from the CN Tower in September 2012 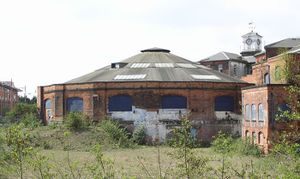 North Midland Railway roundhouse at Derby, England, built in 1839, as it was in 2006 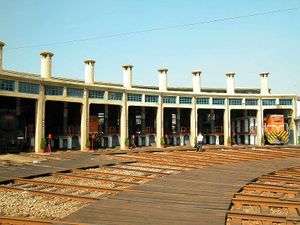 Changhua roundhouse at Changhua, Taiwan, built in 1922, still remain in use now.

A roundhouse is a building used by railroads for servicing locomotives. Roundhouses are large, circular or semicircular structures that were traditionally located surrounding or adjacent to turntables. The defining feature of the traditional roundhouse was the turntable, which facilitates access when the building is used for repair facilities or for storage of steam locomotives.

Early steam locomotives normally travelled forwards only; although reverse operations capabilities were soon built into locomotive mechanisms, the controls were normally optimized for forward travel, and the locomotives often could not operate as well in reverse. Some passenger cars, such as observation cars, were also designed as late as the 1960s for operations in a particular direction. A turntable allowed a locomotive or other rolling stock to be turned around for the return journey.

Most modern diesel and electric locomotives can run equally well in either direction, and many are push-pull trains with control cabs at each end. In addition, railroads often use multiple locomotives to pull trains, and even with locomotives that have distinct front and rear ends, the engines at opposing ends of a locomotive "consist" (a group of locomotives coupled together and controlled as a single unit) can be aligned so they face opposite directions. With such a setup, trains needing to reverse direction can use a technique known as a "run around," in which the engines are uncoupled from the train, pull around it on an adjacent track or siding, and reattach at the other end. The engineer changes operating ends from the original locomotive to the one on the opposite end of the locomotive consist.

Railroad terminals also use features such as balloon loops and wyes (Commonwealth: triangle) to reverse the orientation of railroad equipment. Because of the advent of these practices, modern roundhouses are frequently not round and are simply large buildings used for servicing locomotives. Like much other railroad terminology, however, the structure has retained its traditional name. The alternative term engine-house encompasses both semi-circular and rectangular structures and broadly describes all buildings intended for storage and servicing of locomotives.[1] Shops or workshops are buildings containing hoists and heavy machinery capable of major repairs beyond routine servicing.[2] Some roundhouses include shop facilities internally or in adjoining buildings.

Probably the first railway roundhouse was built in 1839 at Derby, England by the North Midland Railway. Some private workshops, such as that of Fenton, Murray and Jackson in Leeds (1831–1843), may previously have been laid out in a radial pattern. In a guidebook of the time we are told "The engine-house is a polygon of sixteen sides, and 190 feet (58 m) in diameter, lighted from a dome-shaped roof, of the height of 50 feet (15 m). It contains 16 lines of rails, radiating from a single turn-table in the centre: the engines, on their arrival, are taken in there, placed upon the turn-table, and wheeled into any stall that may be vacant. Each of the 16 stalls will hold two, or perhaps more, engines."[3] This roundhouse narrowly escaped demolition when the works closed down, and was classified as a listed building. The Derby roundhouse was restored in 2010, being converted into a brand new site for Derby College, with a new addition called the 'Stephenson Building' including the other survival of demolition - the original Midland Counties Railway workshop. The new site was opened in September 2009. Tours can be arranged through Derby Tourist Information Centre.

Since the great dieselisation era of the 1940s and 1950s, many roundhouses have been demolished or put to other uses, but a few still stand and remain in use on the railroads. Early roundhouses were too small for later locomotives: The Roundhouse, Chalk Farm, London was built in 1847, but was too small for its function within 20 years (it is now an arts centre and concert venue). The unusual shape of the buildings can make them difficult to adapt to new uses, but can also be aesthetically appealing.

The B&O Railroad Museum in Baltimore, Maryland is located in the restored roundhouse of the Baltimore and Ohio Railroad. It is said to be the world's largest 22-sided building.[4]

The roundhouse located on the BNSF line, with the last stop in Aurora, Illinois, was purchased and restored by NFL football player Walter Payton. After Payton's death the roundhouse was renamed Two Brothers Roundhouse, with a plaque mounted in Payton's honor.

The Canadian National Railways roundhouse at the Turcot Yard in Montreal, built in 1906, was the largest ever built in Canada. Its demolition in 1962 to make way for the Turcot Interchange illustrated a profound change in transportation habits across North America.

Valley Heights roundhouse, 75 km west of Sydney NSW, is the oldest surviving roundhouse in Australia, and has been preserved as a railway museum.

The museum roundhouse in Wolsztyn, in western Poland, continues to supply steam locomotives for regular national rail services (as of 2011).

The London Roundhouse Project London, Ontario, Canada, is an extensive renovation of the Michigan Central Railroad steam locomotive repair shop which was built in 1887. It is to become the new home of Ellipsis Digital and Engine SevenFour, a pair of emerging technology companies.