listen); French: rafle or attrapage) was a widespread Nazi German World War II military tactic used in occupied countries, especially in German-occupied Poland, whereby the SS, Wehrmacht and RSHA ambushed at random thousands of civilians on the streets of subjugated cities for enforced deportation. The civilians were captured in groups of unsuspecting passers-by, or kidnapped from selected city quarters that had been surrounded by German forces ahead of time.[1]

People caught in roundups were most often sent to slave labor camps in Germany, but also taken as hostages in reprisal actions, imprisoned and sent to concentration camps, or summarily executed in numerous ethnic cleansing operations.[2] 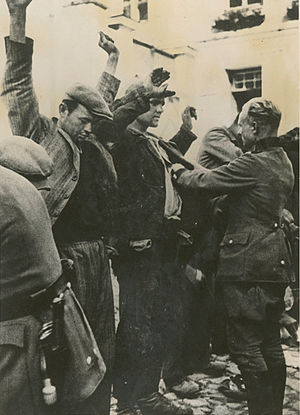 The term łapanka comes from the Polish verb łapać ("to catch") and, used in this context, carried a sardonic connotation from its prior use as the name for the children's game that is known in English as "tag".

"Round ups, or lapankas, the Polish name they were known under, became an essential feature of life in Warsaw and precipitated much wider ferocity on both sides. (...) Whole streets were sealed off by police and soldiers and most trapped men and women were carted off to concentration camps or sent as slave labour to the Reich. Tram and trainloads of people, regardless of work documents, were herded like cattle into trucks, many never to see home or family again." - Ron Jeffery memoir, 1943 [3] 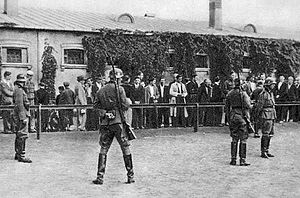 Most people who were rounded up were transported to labor camps (Arbeitslager), including Auschwitz. Many Polish women were selected for sexual slavery. Many Polish children were kidnapped for adoption by German families. Some − those without proper documents or carrying contraband − were transported to concentration and death camps. Others, particularly Jews in hiding and the Poles wanted for harbouring them, were shot dead on the spot.

The term was also used for describing the tactic of cordoning-off of streets, and the systematic searching of buildings. For young men in their 20s and 30s, the only reliable defense against being taken away by the Nazis, was the possession of an identity card (called Ausweis) certifying that the holder was employed by a German company or a government agency locally (for example, by the city utilities or the railways). Thus, many of those who were taken from cafes and restaurants in Warsaw on the night of December 5, 1940 were subsequently released after their documents had been checked.[4] 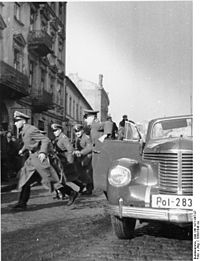 According to estimates, in Warsaw alone between 1942 and 1944 the Nazi łapankas claimed at least 400 victims every day, with numbers reaching several thousand on some days. On 19 September 1942, nearly 3,000 men and women, who had been caught in massive round-ups all over Warsaw during the previous two days, were transported by train-loads to slave labor in Germany.[2]

Such roundups as Poland's łapanka were carried out by the Germans in other occupied countries as well, particularly in northern France, although not as extensively as in Poland. The French term for this practice was rafle, applied primarily to the rounding-up of French Jews. In Denmark, a Nazi roundup was called razzia.

In historical terms, the razzia roundup was used in French colonial context for Muslim raids particularly to plunder and capture slaves from Western and Central Africa, also known as rezzou when practiced by the Tuareg. The word was adopted from ġaziya of Algerian Arabic vernacular and later became a figurative name for any act of pillage, with its verb form razzier. The Soviets used similar tactics to round up middle-class Poles in the part of Poland that they occupied following the 1939 invasion of Poland. Men, women, and children were transported to labor camps in remote regions of the Soviet Union.[5] 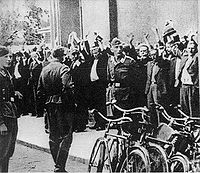 In 1940, one roundup was used by Home Army secret agent Witold Pilecki to gain entry into the Auschwitz camp set up at about that time for Polish prisoners.[6] There, he gathered first-hand intelligence on the camp, and organized inmate resistance.[7] Pilecki deliberately went out into the street during Warsaw roundup of 19 September 1940, and was arrested by the Germans along with other civilians. Auschwitz was the main destination for the Poles from beyond the ghetto.[6] There he organized Związek Organizacji Wojskowej (ZOW, the Military Organization Association) and in November 1940 sent its first report about the camp and the genocide being committed there, to Home Army headquarters in Warsaw.[8][9]

In retribution for roundups as acts of Nazi terror, the Polish resistance carried out attacks on German forces and prepared lists of Nazi leaders to be eliminated for their crimes against civilians.[10] Nazi personnel responsible for organizing roundups, such as members of local unemployment offices, the SS, SD, and German police, were sentenced to death by the Special Courts of the Polish Underground for crimes against Polish citizens during the Occupation of Poland. Because of the particular brutality of the police, the AK killed 361 gendarmes in 1943, and 584 in 1944. In Warsaw alone, ten Germans were killed daily. From August to December 1942, the AK launched 87 attacks on the German administration and members of the apparatus of terror. In 1943 this number rose radically − the AK carried out 514 attacks during the first four months.[11] In an underground operation known as Operacja Główki (Operation Heads), Polish underground combat units from Kedyw eliminated roundup organizers such as

Criticism of the German practice of roundups was the theme of the most popular song of occupied Warsaw, Siekiera, motyka (Polish for Axe, Hoe).[13] In 1943 it was published by the Polish resistance's underground presses in the book Posłuchajcie ludzie... (Listen, folks), one of the bibuła publications of the Komisja Propagandy (Propaganda Commission) of the Armia Krajowa (Home Army). The song was also reproduced in several books and records after the German occupation ended. In 1946 the song was featured in the first Polish movie created after the war, Zakazane piosenki, directed by Leonard Buczkowski.