The Royal Auxiliary Air Force (RAuxAF), originally the Auxiliary Air Force (AAF), and now more commonly called the RAF Reserve, is the volunteer reserve element of the Royal Air Force, providing a primary reinforcement capability for the regular service. It consists of paid volunteers who give up some of their weekends, evenings and holidays to train at one of a number of squadrons around the United Kingdom. Its current mission is to provide trained personnel in support of the regular RAF.

The Royal Auxiliary Air Force owes its origin to Lord Trenchard's vision of an elite corps of civilians who would serve their country in flying squadrons in their spare time. Instituted by Order in Council on 9 October 1924, the first Auxiliary Air Force squadrons were formed the following year. The pilots of AAF squadrons were generally formed from the wealthier classes, as applicants were expected to already have, or be prepared to obtain, their pilot's licence at their own expense, at a cost of £96, about £5,000 today.[1] Unlike members of the Royal Air Force Volunteer Reserve (RAFVR) which had been trained in the RAF and left, but were obliged to return to service if required.[2]

Pilots of the AAF were expected to join for a period of no less than five years, and were required to fly a few hours every quarter and attend annual training for 15 days. Each squadron was provided with a town base for training, and facilities at an aerodrome.[1] 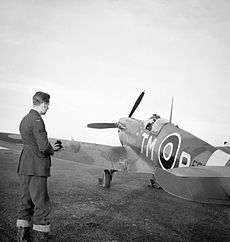 A No. 504 (County of Nottingham) Squadron Supermarine Spitfire during WWII.

By March 1939, 21 flying squadrons had been formed, the 20 surviving units being incorporated into the Royal Air Force at the outbreak of war. The squadrons were equipped with a variety of operational aircraft which included Hurricanes and Spitfires. The squadrons scored a number of notable successes before and during the Second World War: the first flight over Mount Everest, the first German aircraft destroyed over British territorial waters - and over the mainland, the first U-boat to be destroyed with the aid of airborne radar, the first kill of a V-1 flying bomb; the first to be equipped with jet-powered aircraft, and the highest score of any British night fighter squadron. In the Battle of Britain, the AAF provided 14 of the 62 Squadrons in RAF Fighter Command's Order of Battle and accounted for approximately 30% of the accredited enemy kills. The losses sustained during the Battle of Britain were replaced by drafting in regular and RAFVR pilots.

The Tactical Air Force squadrons were chosen to carry out several successful ultra low-level raids on key 'pin-point' targets in occupied Europe. The Balloon Squadrons also played their part, downing and deterring many hostile aircraft and were accredited with the destruction of 279 V1 flying bombs.

The Auxiliary Air Force was also responsible for the anti-aircraft balloon defences of the UK. At the outbreak of war in 1939 there were about 42 Squadrons operating barrage balloons, with the number of squadrons peaking at about 102 in 1944.

These achievements were honoured by the prefix "Royal" conferred by King George VI in 1947. Twenty of the pre-war squadrons were reformed postwar as fighter units. Events after the Second World War heralded a time of great danger for the UK. The onset of the Cold War with the Communist Bloc leading to the Berlin Air Lift and ultimately the outbreak of the Korean War in June 1950. During all these crises the RAuxAF fighter squadrons, the five newly formed Air Observation Post (AOP) squadrons and other RAuxAF units, played their part in the UK's air defence and participated in many NATO air exercises. In 1951, at the height of the Korean War, all 20 RAuxAF fighter squadrons (representing one third of Fighter Command strength) were called up for three months full-time service. They were required for home defence in place of regular squadrons earmarked for deployment to Korea. In the event RAF fighter squadrons were not needed in Korea, but the RAuxAF squadrons were retained for intensive refresher training at their home bases.

The 10 March 1957 saw the disbandment of all the 20 RAuxAF Force fighter squadrons, the five post-war AOP squadrons and the Light Anti-Aircraft ground-based squadrons of the Royal Auxiliary Air Force Regiment. In the following two years or so, the Auxiliary Fighter Control Units associated with them were also disbanded. On 16 March 1960, the Air Commodore-in-Chief and His Royal Highness Prince Philip, Duke of Edinburgh, invited the Squadron Commanders and Flight Commanders of all the disbanded Royal Auxiliary Air Force units to a Reception at Buckingham Palace. All were given the following letter from the Air Commodore-in-Chief:

I have welcomed this opportunity of taking leave of the Commanding Officers and senior Auxiliary officers of the squadrons of the Royal Auxiliary Air Force which are being disbanded and of sending through them this message of appreciation and thanks to all their officers, airmen and airwomen.

The history of the Auxiliary Air Force has been a glorious one. The first Auxiliary squadrons were included in the Air Defence of Great Britain in 1925. By the outbreak of war in 1939 the Auxiliary fighter, coastal and balloon squadrons formed an integral and vital part of our forces. It was aircraft of these squadrons which shot down the first enemy bomber over this country; and Auxiliary squadrons were heavily engaged in the air over Dunkirk and throughout the Battle of Britain. Later they were to win battle honours over the Atlantic, in Malta, North Africa, Sicily and Italy, the Arakan and Burma, and in Normandy, France and Germany.

After the war, the fighter squadrons were reconstituted as the Royal Auxiliary Air Force and the traditional spirit of voluntary service found new outlets with the formation of Regiment, Air OP, Fighter Control and Radar reporting Units, some of which are to remain in being and provide further opportunities for voluntary service.

I wish as Air Commodore-in-Chief to thank officers, airmen and airwomen of the Royal Auxiliary Air Force for all that they have given to the service of the country by their enthusiasm, their spirit and their devotion to duty in peace and war. It is a sad day when it is necessary to tell so many that it is no longer possible to use their services on the duties they have assumed so willingly. I wish them to know that they can look back with pride and satisfaction to service well done.

The renaissance of the RAuxAF began in 1959 with the formation of three Maritime Headquarters Units and one Maritime Support Unit. The MSU in Belfast was very short-lived, but No 1 (County of Hertford) MHU in Northwood, No 2 (City of Edinburgh) MHU in Edinburgh and No 3 (County of Devon) MHU in Mountbatten continued in existence until No 3 was amalgamated into No 1 in 1999. Later that year No 1 was renumbered 600 (City of London) Squadron and No 2 was renumbered 603 (City of Edinburgh) Squadron. These three units formed the entirety of the RAuxAF for twenty years until expansion starting in 1979, with the formation of three Regiment Field Squadrons, continuing with a Movements Squadron in 1982, and, following lessons learned during the Falklands conflict; an Aeromedical Evacuation Squadron in 1983. A more recent addition, in 1987, was an auxiliary element (The Grampian Troop) formed within a regular RAF Regiment Rapier Air Defence Squadron. Another step forward was taken in 1986, with the raising of four Defence Force Flights with the role of ground defence of key points on air bases. In 1984, the RAuxAF's Diamond Jubilee was marked by the award to the Service of its own badge, which forms the basic motif of the Sovereign's Colour for the Royal Auxiliary Force presented by Her Majesty the Queen in 1989. The words of the badge motto COMITAMUR AD ASTRA - Latin "We go with them to the stars".

Gulf War and beyond

During the Gulf War in 1991 the Aeromedical and Movements Squadrons performed with great distinction in theatre and at other locations in the UK and overseas. 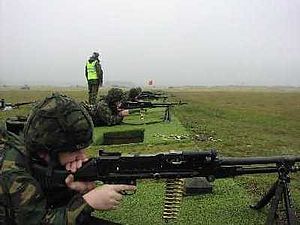 On 5 April 1997, all of the four war-appointable flights of the then Royal Air Force Volunteer Reserve were fully amalgamated into the RAuxAF, each with squadron status. In recognition of their origins, and in the absence of direct county or city territorial affiliations, they were each given the honour of retaining the letters "VR" within their squadron titles. The remaining non-active support elements of the RAFVR were and remain unaffected by this amalgamation, namely the RAFVR(T), the RAFVR(UAS), and at its point of formation, the RAFVR(DTUS) (being the branches for Training, University Air Squadron, and the Defence Technical Undergraduate Scheme, respectively).

File:Standard presentation 2622sqn.jpg
The 2622sqn RAuxAF Regiment standard is presented to an officer on 30 September 2006

During 2003 the RAuxAF was involved in the first large-scale mobilisation for over 50 years. More than 900 people, over 70% of its trained strength, were called into full-time service and were deployed to support RAF operations in Cyprus, Kuwait, Iraq and the Falkland Islands, as well as those in the UK. The RAuxAF enjoyed its 80th anniversary during 2004 and Lord Trenchard's vision has been amply vindicated by its achievements spanning the years. While the Auxiliary concept has moved away from the provision of Flying Squadrons, the professional skill, enthusiasm and esprit-de-corps of his young men of the twenties and thirties are matched by the men and women who constitute the RAuxAF of today.

The Royal Auxiliary Air Force establishment (liability) is set at 2,920 - though recruitment difficulties mean the RAuxAF is currently at a strength well below that; indeed, the RAuxAF's compromises 1,510 personnel as of April 2014.[3]

On 19 July 2007 Senior Aircraftman Chris Dunsmore, aged 29, of 504 (County of Nottingham) Sqn RAuxAF was one of three men killed by a rocket attack on the RAF base at Basrah Airport, Iraq. He was the first serving RAuxAF member killed by enemy action since the Second World War.[4]

On 13 April 2008 Senior Aircraftman Gary Thompson, aged 51, of 504 (County of Nottingham) Sqn RAuxAF was killed by a roadside bomb while on patrol in Kandahar. SAC Thompson is the oldest British serviceman killed in Afghanistan.[5]

Structure of the RAuxAF 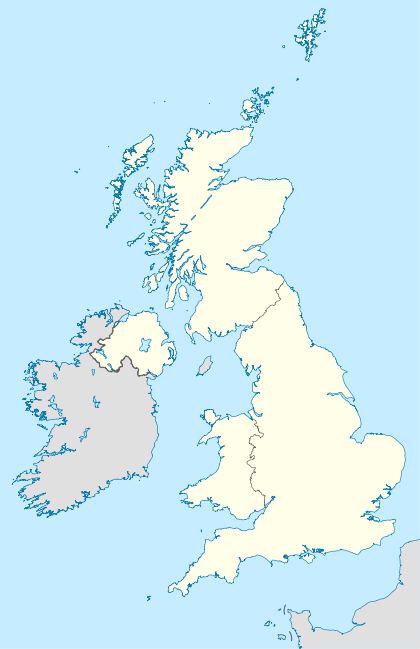 (Note: none of the squadrons listed below are flying units with their own allocated aircraft)