The Royal Bahamas Defence Force (RBDF) is the navy of The Bahamas. Since The Bahamas does not have an army or an air force, its navy composes the entirety of its armed forces. Under The Defence Act, the Royal Bahamas Defence Force has been mandated to defend The Bahamas, protect its territorial integrity, patrol its waters, provide assistance in times of disaster, maintain order in conjunction with the law enforcement agencies of The Bahamas, and carry out any such duties as determined by the National Security Council. The Defence Force is also a member of Caricom's Regional Security Task Force. The task force has seen action in the United Nations mandate in Haiti 1994.

By an Act of Parliament, the RBDF became an official entity on 31 March 1980, falling under the Ministry of National Security. The Queen of The Bahamas, Queen Elizabeth II, is Commander-in-Chief of the Defence Force with her ceremonial role exercised by the Governor General of the Bahamas. The Defence Force also has adopted its own system of medals and awards.

The only combat action the RBDF has ever been involved with has been against Cuba. On 10 May 1980, the HMBS Flamingo attempted to arrest two Cuban fishing vessels, the Ferrocem 165 and the Ferrocem 54, for poaching in Bahamian waters. In retaliation, two Cuban MiG-21s invaded Bahamas airspace and fired on the patrol boat. The Cubans sank the ship with their 23 mm cannons, and fired upon Marines in distress in the water.[2] Fenrick Sturrup, Austin Smith, David Tucker and Edward Williams, all Bahamian Defence Force Marines, were killed in the attack.[3] Fifteen crewmen and the Commander made it safely to Duncan Town, on Ragged Island, after being picked up by the fishing vessels they had boarded. The poachers were convicted in July 1980, and Cuba eventually admitted responsibility, paying the Bahamas $10 million in compensation for the incident.

The RBDF is strictly a naval force, and therefore differs from the rest of its Caribbean counterparts. With about 1,000 members, it is the largest of the Commonwealth Caribbean navies. Several changes in equipment have been seen in the history of the RBDF. Originally British uniforms were worn by RBDF personnel; now U.S. woodland camouflage is worn (as opposed to the U.S. Army universal camouflage worn by The Royal Bahamas Police Force Drug Enforcement Unit).

Unlike other British Commonwealth Land Forces, there are no regular infantry brigades. Instead, there are special forces. These are the Special Operations Unit, which is the seagoing section associated with all ships and small craft, and the Commando Squadron, which acts as an amphibious infantry unit and also performs security duties. The Commando Squadron is a sizable force of at least 500 Special Marine Commandos. Training is conducted with the U.S. Navy SEALs in special naval warfare and also with the British Royal Marines. A common training practice is to have a marine recruit conduct a two-mile swim carrying a forty-pound rucksack. 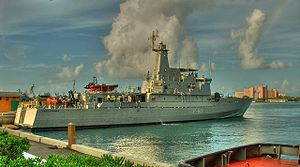 There are two career tracks in the RBDF: Marine (rating) & Officer. The enlisted personnel ranks range from Marine to Force Chief Petty Officer. The Officer ranks range from Midshipman to Commodore. The force is organized and trained along the lines of the British Royal Navy and many of the officers attend British service academies.

The Headquarters of the Defence Force are at RBDF Base HMBS Coral Harbour, on New Providence Island. The commander officer, known as "Commander Defence Force" is Commodore Roderick Bowe, who relieved Commodore Clifford 'Butch' Scavella on the 21 of January, 2010. Additional bases are located in Matthew Town, Inagua and Freeport, Grand Bahama.

The RBDF uses the British Royal Navy style of rank insignia, and all ships carry the title HMBS (Her Majesty’s Bahamian Ship).

Due of the lack of ships, most RBDF members do not spend time at sea, and are used for other military or non-military roles.

Peacekeeping missions have been conducted with the participation of RBDF members in El Salvador and Haiti.

Call for an overhaul of the RBDF

During a radio interview on the Bahamas radio station Love 97 Issues of the Day show on 5 December 2006, the RBDF commander stated that there were only two patrol boats operational and there is only one plane in service, but no pilot trained to fly the aircraft. He also stated that up to 25% of the ranks of the Defence Force are 'bad apples' and need to be weeded out.[citation needed]

The commander also stated that there are many programs being studied set to improve the Defence Force's capacity to provide security for Bahamian territorial waters. The future revitalization of the RBDF will include the provision of additional aircraft, increased manpower & salaries, base facilities and command outposts.

In the early summer of 2008, these overhauls had begun. The RBDF has also reduced numbers by a third in order to remove undesirable personnel from the military ranks. Service vehicles and patrol boats are in more regular use and both illegal immigrant seizures and illegal drug seizures have increased proportionately to the revamped force finally being used. One of the major seizures was undertaken by boat P-48. Roughly 692 kilogram sized bales of marijuana were taken off a "go-fast" boat (a light offshore racing boat) with a local street value of roughly 750,000 USD and a Miami street value at well over 1.3 million USD.[citation needed]