The Royal Danish Army (Danish: Hæren) is the ground-based branch of the Danish Defence, together with the Danish Home Guard. For the last decade, the Royal Danish Army has undergone a massive transformation of structures, equipment and training methods, abandoning its traditional role of anti-invasion defence, and instead focusing on out of area operations by, among other initiatives, reducing the size of the conscripted and reserve components and increasing the active (standing army) component, changing from 60% support structure and 40% operational capability, to 60% combat operational capability and 40% support structure. When fully implemented, the Danish Army will be capable of deploying 1,500 troops permanently on three different continents continuously, or 5,000 troops for a shorter period of time, in international operations without any need for extraordinary measures such as parliamentary approval of a war funding bill.

The Royal Danish Army was originally designed to prevent conflicts and war, maintain Denmark's sovereignty and protect her interest. With time, these goals have developed into also encompassing the need to protect freedom and peaceful development in the world with respect for human rights. 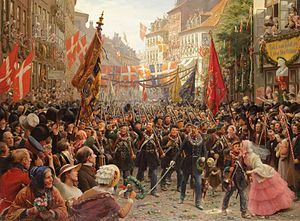 Danish military veterans are welcomed home and greeted as victors in the streets of Copenhagen, upon return from the First Schleswig War, 1849. The banner reads 'Thank you, you who fell, and you who stayed behind'

Originally, the Danish King commanded the Army into battle himself and fought on the battlefield. In 1815, however, as a result of continued evolution and division of command, four general commands were created with the King as the supreme authority: Zealand and adjacent islands, Funen Langeland, Jutland and the duchies of Schleswig and Holstein. At the same time, the need for maintenance of the army in peacetime became pertinent, and the Army Operational Command was established.

The Royal Danish Army has historically been an integral part of the defence of Denmark and thus involved in warfare, skirmishes and battles continuously to protect her interests. Most notably various territorial wars with Sweden, Russia and Prussia, the Napoleonic Wars on the side of France, and the Second World War, controversially and famously against the wishes of the Danish government, which had ordered immediate surrender to Germany. In modern times the Royal Danish Army has also become the backbone of Danish international missions, such as those in Kosovo, Iraq and Afghanistan.

The Royal Danish Army has been committed to a number of United Nations and NATO peacekeeping and unconventional warfare operations since becoming involved in the Yugoslav Wars under UN mandate in 1994, most notably in the famous Operation Bøllebank. The Royal Danish Army was also engaged in the Kosovo War and continues to this day to maintain peacekeeping operations in Kosovo as part of the United Nations Interim Administration Mission in Kosovo (UNMIK), together with the Danish Home Guard. Furthermore, the Royal Danish Army was involved in the War in Iraq from 2003-2007 with a significant contingent of soldiers responsible for creating and maintaining peace in the province of Basra, together with the British.

Denmark lost its first soldier in Iraq on 17 August 2003: Preben Pedersen a 34-year-old Lance Corporal with the Jutland Dragoon Regiment became the first coalition soldier not from the United States or Britain to die in the Iraq War. Starting in 2001, the Royal Danish Army has also been involved in the War in Afghanistan. For the past few years, the Royal Danish Army and the British Army have been involved in heavy clashes with the Taliban in the Helmand Province, where about 760 Danish soldiers control a large battlegroup. The Danish army withdrew its combat forces from Afghanistan in May 2014. 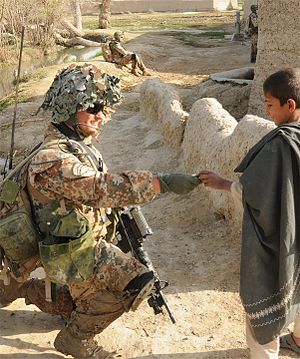 A Danish Guard Hussar interacting with the local population in Helmand, Afghanistan, in 2009 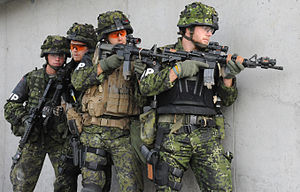 Structure of the Royal Danish Army 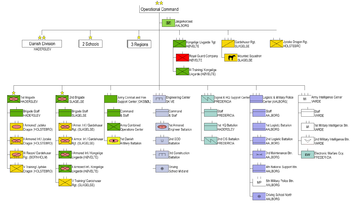 Structure of the Royal Danish Army 2015 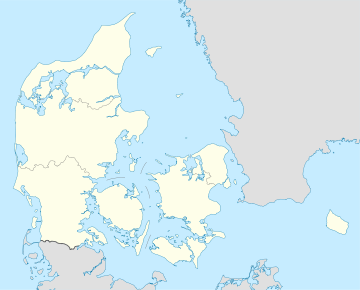 The structure of the Danish army changed in 2015, leaving Danish Division without brigades or support troops directly under irs command. The two brigades have only command over combat battalions, as combat support and logistic support units are now grouped under various support centers. 1st Brigade consists of four combat battalions and is tasked with providing troops for international deployments. 2nd Brigade consists of five battalions and is tasked with the defense of Danish territory. Support Centers contain the Army's combat support, combat logistic and general support units, and in some cases perform also tasks for the entire Danish Defense structure: i.e. the Logistic Regiment, Army Logistics Center and Defense Military Police Center provides operational units for the Army and overall logistic services to Army and Military Police units and functions for all of the Danish defense establishment.

The Danish Army Air Corps (Hærens Flyvertropper) was established in 1923 following the rapid development of military aircraft technology. The air corps was based on two squadrons of Fokker C.V reconnaissance aircraft from 1923 to 1932, when 17 Gloster Gauntlet fighters were purchased to form two new squadrons. In 1937, ten Fokker D.XXI fighters were built on licence in the Royal Army Aircraft Factory at Værløse. As a result of the establishment of the Royal Danish Air Force in 1950, the Army Air Corps was closed and activities transferred to the new service. During the Cold War the Army created the Army Air Service (Hærens Flyvetjeneste) in 1971, which flew anti-tank and transport helicopters. But with the end of the Cold War and the reduction of forces the last 12 Eurocopter Fennec AS 550 helicopters were transferred to the Royal Danish Air Force in 2003 and the Army Air Service disbanded.

Regiments of the Royal Danish Army

After the end of the Cold War the Royal Danish Army began to reduce the number of brigades and combat units. Ultimately also most of the Army's regiments were disbanded, leaving just three of the oldest regiments in Europe in active service: