Like other motorcycle manufacturers such as BSA and IZhMASh, the Enfield Cycle Company began business as a weapons manufacturer, most famous for the Enfield rifle. This legacy is reflected in the company logo[disputed – discuss], a cannon, and their motto, "Made Like A Gun".

In 1955, Enfield Cycle Company partnered with Madras Motors in India in forming Enfield of India, based in Chennai, and started assembling the 350cc Royal Enfield Bullet motorcycle in Madras. The first machines were assembled from components imported from England. Starting in 1957, Enfield of India acquired the machines necessary to build components in India, and by 1962 all components were made in India.

Royal Enfield produced bicycles at its Redditch factory until it closed in early 1967. The company's last new bicycle was the 'Revelation' small wheeler, which was released in 1965.[1][better source needed] Production of motorcycles ceased in 1970 and the original Redditch, Worcestershire-based company was dissolved in 1971.[2] Enfield of India continued, and bought the rights to use the Royal Enfield name. 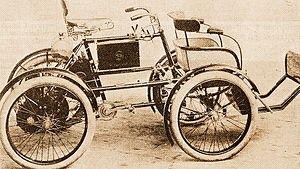 In 1893, the Enfield Manufacturing Company Ltd was registered to manufacture bicycles, adopting the branding Royal Enfield.

By 1899, Royal Enfield were producing a quadricycle – a bicycle modified by adding a wrap-around four-wheeled frame, retaining a rear rider-saddle with handlebars – having a front-mounted passenger seat, driven by a rear-mounted De Dion engine.[3]

After experimenting with a heavy bicycle frame fitted with a Minerva engine clamped to the front downtube, Enfield built their first motorcycle in 1901 with a 239 cc engine.

In 1907, Enfield merged with the Alldays & Onions Pneumatic Engineering Co. of Birmingham, and began manufacturing the Enfield-Allday automobile. 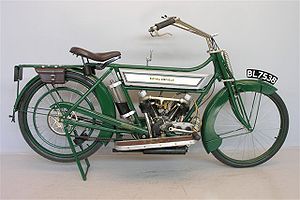 In 1912, the Royal Enfield Model 180 sidecar combination was introduced with a 770 cc V-twin JAP engine which was raced successfully in the Isle of Man TT and at Brooklands.

In 1914 Enfield supplied large numbers of motorcycles to the British War Department and also won a motorcycle contract for the Imperial Russian Government. Enfield used its own 225 cc two-stroke single and 425 cc V-twin engines.[5] They also produced an 8 hp motorcycle sidecar model fitted with a Vickers machine gun. 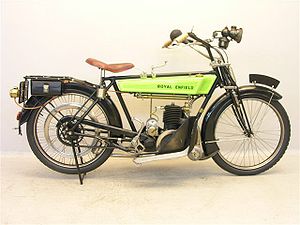 In 1921, Enfield developed a new 976 cc twin, and in 1924 launched the first Enfield four-stroke 350 cc single using a Prestwich Industries engine. In 1928, Royal Enfield began using the bulbous 'saddle' tanks and centre-spring girder front forks, one of the first companies to do so. Even though it was trading at a loss in the depression years of the 1930s, the company was able to rely on reserves to keep going. In 1931, Albert Eddie, one of the founders of the company, died and his partner R.W. Smith died soon afterwards in 1933. 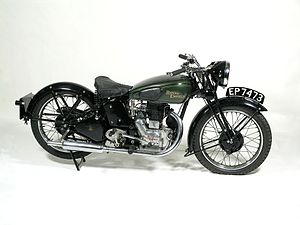 During World War II, The Enfield Cycle Company was called upon by the British authorities to develop and manufacture military motorcycles. The models produced for the military were the WD/C 350 cc sidevalve, WD/CO 350 cc OHV, WD/D 250 cc SV, WD/G 350 cc OHV and WD/L 570 cc SV. One of the most well-known Enfields was the Royal Enfield WD/RE, known as the Flying Flea, a lightweight 125 cc motorcycle designed to be dropped by parachute with airborne troops.

In order to establish a facility not vulnerable to the wartime bombing of the Midlands, an underground factory was set up, starting in 1942, in a disused "Bath Stone" quarry at Westwood, near Bradford-on-Avon, Wiltshire. Many staff were transferred from Redditch and an estate of "prefabs" was built in Westwood to house them.

As well as motorcycle manufacture, it built other equipment for the war effort such as mechanical "predictors" for anti-aircraft gunnery: the manufacture of such high precision equipment was helped by the constant temperature underground. After the war the factory continued, concentrating on engine manufacture and high precision machining. After production of Royal Enfield motorcycles ceased, the precision engineering activities continued until the final demise of the company.

Postwar, Royal Enfield resumed production of the single cylinder ohv 350cc model G and 500cc Model J, with rigid rear frame and telescopic front forks. These were ride-to-work basic models, in a world hungry for transport. A large number of factory reconditioned ex-military sv Model C and ohv Model CO singles were also offered for sale, as they were sold off as surplus by various military services.[6]

In 1948, a groundbreaking development in the form of rear suspension springing was developed, initially for competition model "trials" models (modern enduro type machines), but this was soon offered on the roadgoing Model Bullet 350cc, a single cylinder OHV. This was a very popular seller, offering a comfortable ride. A 500cc version appeared shortly after. A later 1950s version of the Bullet manufacturing rights and jigs, dies and tools was sold to India for manufacture there, and where developed versions continue to this day.[6]

In 1949, Royal Enfields version of the now popular selling parallel twins appeared. This 500cc version was the forerunner of a range of Royal Enfield Meteors, 700cc Super Meteors and 700cc Constellations. Offering good performance at modest cost, these sold widely, if somewhat quietly in reputation. The 700cc Royal Enfield Constellation Twin has been described as the first Superbike. [7]

The 250cc class was important in the UK as it was the largest engine which a 'learner' could ride without passing a test. In the late 1950s and early 1960s, Royal Enfield produced a number of 250 cc machines, including a racer, the 'GP'[8] and a Scrambler, the 'Moto-X', which used a modified Crusader frame, leading link forks and a Villiers Starmaker engine.[9][10] The Clipper was a base-model tourer with the biggest-seller being the Crusader, a 248 cc pushrod OHV single producing 18 bhp (13 kW).

In 1965, a 21 bhp (16 kW) variant called the Continental GT, with red GRP tank, five-speed gearbox (which was also an option on the Crusader), clip-on handlebars, rearset footrests, swept pipe and hump-backed seat was launched. It sold well with its race-styling including a fly-screen resembling a race number plate which doubled as a front number plate mount.[11]

The Avon 'Speedflow' full sports fairing was available as an extra in complementary factory colours of red and white.[12]

Other variants were the Olympic[9] and 250 Super 5, notable for use of leading-link front suspension (all the other 250 road models had conventional telescopic forks) and the 250 'Turbo Twin', fitted with the Villiers 247 cc twin cylinder two-stroke engine.

The Royal Enfield GP production-volume racer was first raced in the Manx Grand Prix in September, 1964. Developed in conjunction with Royal Enfield Racing Manager Geoff Duke[8] the first public appearance was at Earls Court Show in November, 1964. Using a duplex-tube frame, leading link forks and one-piece tank and seat unit, the 250cc two-stroke single engine was similar to other small capacity race machines offered from rivals Greeves, Cotton, DMW and particularly Villiers,[13][14] which provided the engines for these marques and many other manufacturers and bike-builders including the 'Starmaker' competition engine used for the Scorpion racer and Sprite scrambler.[9] 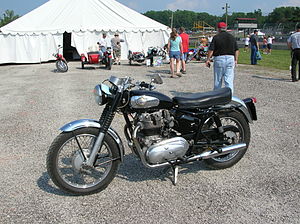 During the onslaught of the Japanese motorcycle manufacturers in the late sixties and early seventies, the English factories made a final attempt with the 1962–;1968 [15] series I and Series II. Made largely for the US market, it sported lots of chrome and strong performance, completing the quarter mile in less than 13 seconds at speeds well above 175 km/h (105 mph).[16] It became very popular in the US, but the classic mistake of not being able to supply this demand added to the demise of this last English-made Royal Enfield.[17]

The Redditch factory ceased production in 1967 and the Bradford-on-Avon factory closed in 1970, which meant the end of the British Royal Enfield. After the factory closed a little over two hundred Series II Interceptor engines were stranded at the dock in 1970. These engines had been on their way to Floyd Clymer in the US; but Clymer had just died and his export agents, Mitchell's of Birmingham, were left to dispose of the engines. They approached the Rickman brothers for a frame. The main problem of the Rickman brothers had always been engine supplies, so a limited run of Rickman Interceptors were promptly built.[18]

As far as the motorcycle brand goes, though, it would appear that Royal Enfield is the only motorcycle brand to span three centuries, and still going, with continuous production. A few of the original Redditch factory buildings remain (2009) and are part of the Enfield Industrial Estate.

From 1955 to 1959, Royal Enfields were painted red, and marketed in the USA as Indian Motorcycles by the Brockhouse Corporation, who had control of the Indian Sales Corporation (and therefore Indian Motorcycles) and had stopped manufacturing all American Indians in the Springfield factory in 1953. But Americans were not impressed by the badge engineering and the marketing agreement ended in 1960, and from 1961, Royal Enfields were available in the US under their own name. The largest Enfield 'Indian' was a 700 cc twin named the Chief, like its American predecessors.[19]

Royal Enfield motorcycles had been sold in India since 1949. In 1965, the Indian government looked for a suitable motorcycle for its police and army, for use patrolling the country's border. The Bullet was chosen as the most suitable bike for the job. The Indian government ordered 800 350-cc model Bullets, an enormous order for the time.[20] In 1955, the Redditch company joined Madras Motors in India in forming "Enfield India" to assemble, under licence, the 350 cc Royal Enfield Bullet motorcycle in Madras (now called Chennai). Under Indian law, Madras Motors owned the majority (over 50%) of shares in the company. In 1957 tooling equipment was sold to Enfield India so that they could manufacture components.

Royal Enfield India manufactures and sells in India, and also exports to Europe as well as the Americas, South Africa and Australia. They recently entered the Indonesian market.[21] Recently Royal Enfield has undergone a major retooling particularly in the engine department going from carburated cast-iron engines to twin spark unit construction engines on all its models, with EFI available on their flagship 500 cc model. This retooling has sparked such an interest in these bikes that they have started double shifts at the plants.

In August 2015, Royal Enfield Motors announced it is establishing its North American headquarters and a dealership in Milwaukee, Wisconsin, with the intention to offer three bikes, the Bullet 500, Classic 500 and Continental GT 535 Cafe Racer as they feel this engine size represents an underserved market. The dealership will be Royal Enfield's first company-owned store in the U.S., according to Rod Copes, president of Royal Enfield North America. The company wants to establish about 100 dealerships in American cities starting with Milwaukee.

"I live here, so I am biased. But in my mind, Milwaukee is kind of the center of motorcycling in the United States," said Copes, a former Harley-Davidson executive. "We view this as kind of our first flagship dealership," he added.[22]