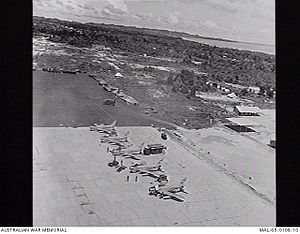 Labuan Air Base with CAC Sabre in 1965, today became the main airbase for East Malaysia.

The Malaysian air forces trace their lineage to the Malayan Auxiliary Air Force formations of the Royal Air Force raised in 1934. They later transformed into the Straits Settlements Volunteer Air Force and the Malaya Volunteer Air Force formed in 1940 and dissolved in 1942 during the height of the Japanese advance over Malaya. The latter was reestablished in 1950 in time for the Malayan Emergency and contributed very much to the war effort. On 2 June 1958, the MVAF finally became the Royal Federation of Malaya Air Force, this date is celebrated as RMAF Day yearly.

On 25 October 1960, after the end of the Malayan Emergency, the British Royal Air Force handed over their first base in Malaya to the RFMAF, at Simpang Airport; it was established on 1 June 1941, in Sungai Besi, Kuala Lumpur which was formerly part of Selangor and the national capital city.

The first aircraft for the fledgling air force was a Scottish Aviation Twin Pioneer named "Lang Rajawali" by the then Prime Minister Tunku Abdul Rahman. Several Malayans serving with the Royal Air Force transferred to the Royal Federation of Malaya Air Force. The role played by TUDM was limited initially to communications and the support of ground operations against Communist insurgents during the Malayan Emergency. TUDM received its first combat aircraft with the delivery of 20 Canadair CL41G Tebuans (an armed version of the Canadair Tutor trainer). TUDM also received Aérospatiale Alouette III helicopters, to be used in the liaison role. 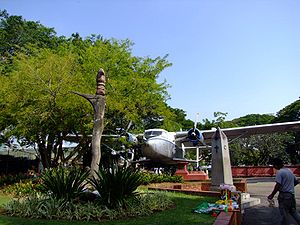 With the formation of the Malaysian Federation on 16 September 1963, the name of the force was changed to "Tentera Udara Diraja Malaysia" or "Royal Malaysian Air Force". New types introduced into service included the Handley Page Herald transport and the De Havilland Canada DHC-4 Caribou. TUDM received Sikorsky S-61A-4 helicopters in the late 16 and early seventies which were used in the transport role. TUDM gained an air defence capability when the Australian Government donated 10 ex-RAAF CAC Sabre fighters. These were based at the Butterworth Air Base.

After the withdrawal of British military forces from Malaysia and Singapore at the end of 1971, a five-nation agreement between Malaysia, Singapore, New Zealand, Australia, and the United Kingdom was concluded to ensure defence against external aggression. The Royal Australian Air Force maintained two Mirage IIIO squadrons at the Butterworth Air Base as part of its commitment to the Five Power Defence Arrangements. These squadrons were withdrawn in 1986, although occasional deployments of RAAF aircraft continue. 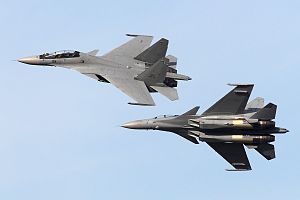 With the withdrawal of British military forces, TUDM underwent gradual modernisation from the 1970s to the 1990s. The Sabres were replaced by 16 Northrop F-5E Tiger-IIs. A reconnaissance capability was acquired with the purchase of two RF-5E Tigereye aircraft. TUDM also purchased 88 ex-US Navy Douglas A-4C Skyhawks, of which 40 of the airframes were converted/refurbished by Grumman Aircraft Engineering at Bethpage into the A-4PTM ('Peculiar To Malaysia'), configuration (similar to A-4M standard). TUDM has traditionally looked to the West for its purchases, primarily to the United States. However, limitations imposed by the US on "new technology" to the region, such as the AIM-120 AMRAAM fire-and-forget air-to-air missile, has made TUDM consider purchases from Russia and other non-traditional sources.

The '90s saw the arrival of first the BAE Hawk Mk108/208 which replaced the T/A-4PTMs, followed by the MiG-29N/NUB in 1995 in the air superiority role and delivery of the F/A-18D Hornet in 1997 to provide an all weather interdiction capability. In 2003 a contract was signed for eighteen Su-30MKMs for delivery in 2007 to fulfill a requirement for an initial order of multi-role combat aircraft (MRCA). A requirement for a further eighteen MRCAs remains unfulfilled. TUDM is also looking for an AWACS aircraft, although no firm orders have been placed.

On 8 December 2005 four Airbus Military A400M aircraft were ordered to enhance the airlift capability. The first Malaysian A400M is delivered in March 2015.[3][4] In late 2006, the Government signed a contract to purchase eight Aermacchi MB-339CMs to add to the eight MB-339AMs already in service.

In March 2007, then-Deputy Prime Minister and Defence Minister Najib Tun Razak notified the public that the MiG-29s would continue in service until 2010. Later that year, Najib announced the Nuri (Sikorsky S-61A-4) helicopter, in service since 1968 with 89 crew members killed in 15 accidents, would be phased out by 2012 and replaced by the Eurocopter EC725.[5] Deputy RMAF Chief Lieutenant General Bashir Abu Bakar told the media after opening Heli-Asia 2007, that tender assessment for the replacement of the Sikorsky S-61A-4 would occur in early 2008.[6]

In late 2013 Vector Aerospace, a global independent provider of aviation maintenance, repair and overhaul (MRO) services, with its subsidiary, Vector Aerospace Helicopter Services-North America ("HS-NA"), one of the world’s leading providers of helicopter maintenance, repair and overhaul (MRO) services was chosen to carry out a comprehensive fully integrated glass cockpit installation for the S-61A-4 Nuri, breathing new life in an already well established platform, and giving a modern,reliable and cost effective product that will carry the S61A-4 Nuri well into the future.

In June 2009, RMAF chief General Azizan Ariffin said that the air force would replace their MiG-29s with aircraft that have better agility and the capability to attack enemy forces.[7]

At the 12th Defence Services Asia (DSA) exhibition 2010,[8] a Letter of Agreement (LOA) was signed for 12 EC725 helicopters to be supplied to the RMAF.[9] With that, EADS, (the European Aeronautical Defence and Space Company), has pledged 100 million Euros to set up a comprehensive helicopter centre in Subang for an aeronautical academy, training, simulation and a maintenance, repair and overhaul facility for the EC725 Cougar military version and the EC225 civilian model.[10]

The Royal Malaysian Air Force currently has an MRCA replacement program to replace the MiG-29 and F-5 fighters that will be retired by the end of 2015. The MRCA replacement program is currently narrowed down to 4 types of aircraft (Eurofighter Typhoon, Dassault Rafale, F/A-18E/F Super Hornet and Saab JAS 39 Gripen). Under the program, the RMAF is looking to equip three squadrons with 36 to 40 new fighter aircraft with a budget of RM6 billion to RM8 billion (US$1.84 billion to US$2.46 billion).[11] 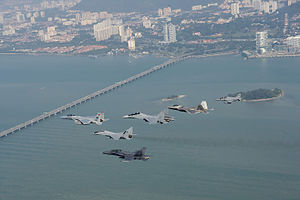 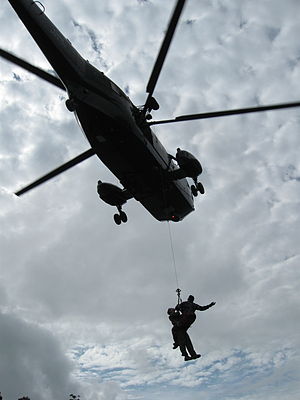 See also: List of aircraft of the Malaysian Armed Forces

Until the late 1970s, the Royal Malaysian Air Force used the same officer ranking system as the Royal Air Force. They were replaced by army-style designations and given Malay title equivalents, but the sleeve insignia remained the same mirroring the RAF practice, but all General Officers wear 1 to 5 stars on the shoulder board in addition to the existing sleeve insignia. The list of ranks which are currently used are shown below (in descending order). NCOs and enlisted ranks remained unchanged, and retain their pre-1970s names.

All officers, with the exception of the Marshal of the Royal Malaysian Air Force apply the Air Force acronym (RMAF, TUDM) to their rank title, to differentiate from their Malaysian Army equivalents. For example, a Colonel in the Air Force would be titled Colonel, RMAF or Kolonel, TUDM in Malay. 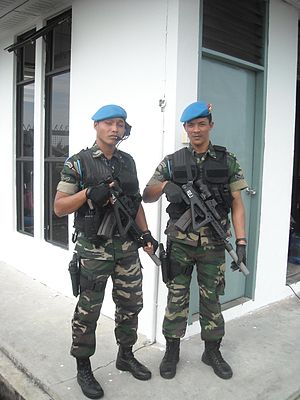 The RMAF Regiment is the ground and air defence support unit of the RMAF. It is composed of the various units of the regiment tasked to fulfill the RMAF's mission and vision. These units are:

The special arm of the RMAF is known as PASKAU (a Malay acronym for Pasukan Khas Udara, which loosely means 'Special Air Service'), and is part of the RMAF Regiment. PASKAU was formed in response to a mortar attack by the then Communist Party of Malaya on a DHC-4 Caribou in the 1970s at the Kuala Lumpur Air Base.[21] During peacetime, the unit is tasked with responding to aircraft hijacking incidents as well as protecting the country's numerous RMAF airbases and civilian airports. Its wartime roles include ground designation, sabotaging of enemy air assets and equipment and the defence of RMAF aircraft and bases. This unit is also deployed for counter-terrorism duties as well as Urban warfare/Close quarters combat.

In May 2008, two J85-GE-21 engines that power the Northrop F-5E Tiger II fighter jets belonging to the Royal Malaysian Air Force were reported missing, as of sometime in 2007, from an RMAF warehouse in Kuala Lumpur during Najib's tenure as Defence Minister in Abdullah Ahmad Badawi's Cabinet. The jet engines belonged to the 12th Squadron (Scorpion) based in Butterworth. The issue became a matter of political dispute,[22] and it was reported a brigadier-general, 40 other armed forces personnel, had been sacked over the incident.[23] On 6 January 2010, two Malaysians, an Airman (Sergeant) and a civilian contractor, were charged in connection with the theft and disposal of both engines.[24] On 5 February 2010, Attorney-General Abdul Gani Patail revealed that the two missing engines had been found in Uruguay with the help of the government there and the Malaysian government is proceeding with the necessary measures to secure their return. Investigations showed that the engines were taken out of the RMAF base on 20 December 2007 and 1 January 2008, and sent to a warehouse in Subang Jaya before being shipped out of Malaysia to South America.[25][26]