The Royal Saudi Air Force (RSAF; Arabic: القوات الجوية الملكية السعودية‎‎, al-quwwāt al-ğawwiyyah al-malakiyyah as-suʿūdiyyah), is the aviation branch of the Saudi Arabian armed forces. The RSAF has developed from a largely defensive military force into one with an advanced offensive capability. The RSAF maintains the third largest fleet of F-15s after the American and Japanese air forces.

The backbone of the RSAF is currently the Boeing F-15 Eagle, with the Panavia Tornado also forming a major component. The Tornado and many other aircraft were delivered under the Al Yamamah contracts with British Aerospace (now BAE Systems). The RSAF ordered various weapons in the 1990s, including Sea Eagle anti-ship missiles, laser-guided bombs and gravity bombs. Al-Salam, a successor to the Al Yamamah agreement will see 72 Eurofighter Typhoons delivered by BAE.

The RSAF was formed in the mid-1920s with British assistance. It was re-organized in 1950 and began to receive American assistance from 1952 including the use of Dhahran Airfield by the United States Air Force.

The Saudi forces are equipped with mainly western hardware. Main suppliers are companies in the United Kingdom and the United States of America. Both the UK and the US are involved in training programs conducted in Saudi Arabia. 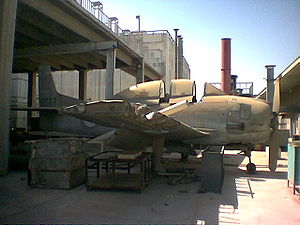 Derelict RSAF T-28A Trojan, one of four acquired in the 1950s, at King Abdulaziz University 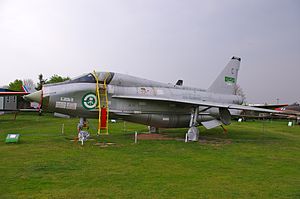 RSAF Roundel on the side of a Lightning Aircraft

During the 1980s and 1990s, by Middle Eastern standards the armed forces of Saudi Arabia were relatively small. Its strength however was derived from advanced technology. The backbone of the fighter force is formed by 134 Tornados from which a batch of 48 Tornado IDS were ordered in 1993 under the al-Yamamah II program and 72 F-15S aircraft delivered from the mid-1990s that operate beside the more than 120 F-15C/D aircraft delivered starting in 1981. Aircraft training is executed on the Pilatus PC-9, BAe Hawk, Boeing F-15D Eagle and the Northrop F-5F Tiger II. The C-130 Hercules is the mainstay of the transport fleet and the Hercules is assisted by CASA CN-235s. Reconnaissance is performed by 17 Squadron with its RF-5E and the Boeing E-3A is the Airborne Early Warning platform operated by 18 Squadron.

The VIP support fleet consists of a wide variety of civil registered aircraft such as the Boeing 707, 737 and 747, Lockheed Tri-Stars, MD11s and G1159A as well as Lockheed L-100-30. The HZ- prefix used in the civilian registrations of these aircraft derived from the former name of the territory (Hejaz)

The Al Yamamah contract was controversial because of the alleged bribes associated with its award. Nonetheless, the RSAF announced its intention to purchase the Typhoon from BAE Systems in December 2005. On 18 August 2006 a memorandum of understanding was signed for 72 aircraft in a GB£6-10 billion deal.[3]

Following this order, the investigation of the Al Yamamah contract was suppressed by the British Prime minister Tony Blair in December 2006, citing "strategic interests" of the UK. On the 17 September 2007 Saudi Arabia announced it had signed a £4.4bn deal with BAE Systems for 72 Typhoons.[4]

On 29 December 2011, the United States signed a $29.4 billion deal to sell 84 F-15s in the SA (Saudi Advanced) configuration. The sale includes upgrades for the older F-15s up to the SA standard and related equipment and services.[5]

On 23 May 2012, British defence firm BAE Systems is to sell 22 BAE Hawk advanced jet trainer aircraft to the Royal Saudi Air Force for a total of £1.9 billion ($3 billion). The deal also includes simulators, ground and training equipment and spares.[6]

In 2013, the USAF tendered for security services to protect the Saudi air force from Cyberwarfare.[7] 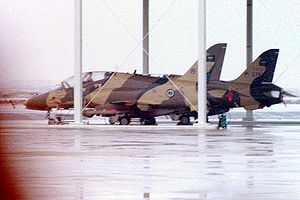 The RSAF units are divided into Wings that are dispersed across the seven air bases:

Units of the RSAF 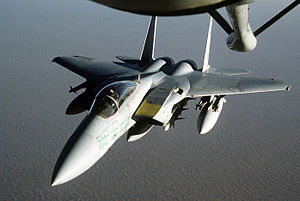 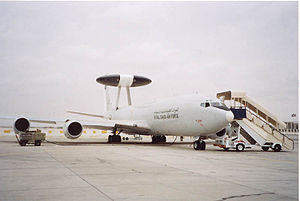 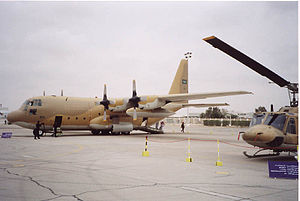 The following officers have been commanders of the RSAF: