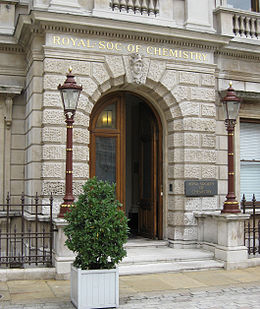 The Royal Society of Chemistry (RSC) is a learned society (professional association) in the United Kingdom with the goal of "advancing the chemical sciences." It was formed in 1980 from the merger of the Chemical Society, the Royal Institute of Chemistry, the Faraday Society and the Society for Analytical Chemistry with a new Royal Charter and the dual role of learned society and professional body. At its inception the Society had a combined membership of 34,000 in the UK and a further 8,000 abroad.[2] The headquarters of the Society are at Burlington House, Piccadilly, London. It also has offices in Thomas Graham House in Cambridge (named for Thomas Graham, the first president of the Chemical Society) where RSC Publishing is based. The Society has offices in the United States at the University City Science Center, Philadelphia, in both Beijing and Shanghai, China and Bangalore, India.[3] The organisation carries out research, publishes journals, books and databases, as well as hosting conferences, seminars and workshops. It is the professional body for chemistry in the UK, with the ability to award the status of Chartered Chemist (CChem) and, through the Science Council the awards of Chartered Scientist (CSci), Registered Scientist (RSci) and Registered Science Technician (RScTech) to suitably qualified candidates. The designation FRSC is given to a group of elected Fellows of the society who have made major contributions to chemistry and other interface disciplines such as biological chemistry. The names of Fellows are published each year in The Times (London). Honorary Fellowship of the Society ("HonFRSC") is awarded for distinguished service in the field of chemistry.

The president is elected biennially and wears a badge in the form of a spoked wheel, with the standing figure of Joseph Priestley depicted in enamel, mainly in red and blue, on a hexagonal medallion in the centre. The rim of the wheel is gold, and the twelve spokes are of non-tarnishable metals.

Past presidents of the society have been:

The following are membership grades with post-nominals (designatory letters):[15]

The qualification GRSC (Graduate of the Royal Society of Chemistry) was awarded from 1981 to 1995 for completion of college courses equivalent to a chemistry degree and overseen by the RSC.[19] It replaced the GRIC offered by the Royal Institute of Chemistry.

The society is organised around 9 divisions, based on subject areas, and local sections, both in the United Kingdom and overseas. Divisions cover broad areas of chemistry but also contain many special interest groups for more specific areas.

There are 12 subjects groups not attached to a division.

There are 35 local sections covering the United Kingdom and Ireland. In countries of the Commonwealth of Nations and many other countries there are Local Representatives of the society and often some activities. 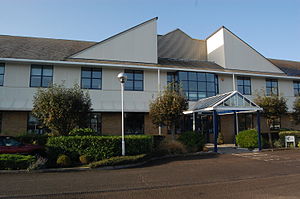 The society is a not-for-profit publisher: surplus made by its publishing business is invested to support its aim of advancing the chemical sciences.

In addition to scientific journals, including its flagship journals Chemical Communications, Chemical Science and Chemical Society Reviews, the society publishes:

Subscriptions to the journals are available individually, or "all-in", under a provision called "RSC Gold".[21]

The London offices of the Society are in Burlington House, Piccadilly. Events are hosted here for the public, RSC member groups and external organisations including monthly lectures on the chemical sciences that streamed live via the RSC's public engagement website – the Reaction. The free lectures take an interesting look at the chemical aspects of a wide range of topics from curry to the enjoyment of music.

The events have attracted notable science writers such as Philip Ball, Antony John Williams, and John Emsley to give public lectures. Most of these are available as archived video streams via the RSC's Reaction website.[22]

Although opened as the Chemistry Centre in 2010, the building has been occupied by the Royal Society of Chemistry since 1857 (at which time it was known as the Chemical Society) – the heart of the Chemistry Centre is the RSC's Library and Information Centre which itself dates back to 1842. Over the years the library for the RSC has received many gifts from notable fellows including Michael Faraday. The library became a centre for information on the chemical sciences during the 1st and 2nd world wars when extensive use was made on the chemical reference material available. In November 2014, the society announced that the centre would be rebranded as simply "Royal Society of Chemistry at Burlington House" and the name "Chemistry Centre" dropped.

The Royal Society of Chemistry's benevolent fund supports the members and their families during difficult times, through advice and guidance, financial support and volunteer support.[23] It dates back to 1920 when the Institute of Chemistry (later the Royal Institute of Chemistry) established it as a memorial to its members who died in the first world war. It had an aim "to help necessitous persons who are, or have been, Fellows or Associates of the Institute, their wives or children, and the widows and dependent relatives of deceased Fellows and Associates" through voluntary contributions from members. The benevolent fund's ethos of "members helping members" stems from the Institute of Chemistry's Council raising money for members in need from other members prior to the fund being formed. [24]

In 1960 the benevolent fund introduced a volunteer visitor system, where members were asked to visit applicants, beneficiaries, elderly and housebound members in their area. Each local section was also appointed a fund representative. [25]

A major review of the fund to modernize it took place in 2003-2004, forming a new strategy document that is updated every three years. It underwent another review in 2014 with the aim to widen its reach and provide a more holistic support wider than financial assistance to Royal Society of Chemistry members and their families. [26]

The Benevolent Fund Committee, formed of volunteer members of the Royal Society of Chemistry, oversees the benevolent fund and meet every three months. [27]

The RSC awards a variety of prizes and awards each year that include awards for excellence in any area of chemistry, in specialist areas or for achievement at particular stages of a chemist's career.[28]

Medals are awarded centrally by the RSC and by the divisions of the organisation. There are also awards that are administered by RSC interest groups.

The centrally awarded medals include the Harrison-Meldola Memorial Prizes which are awarded to a British chemist who is under 32 years of age for promising original investigations in chemistry[29] and the Corday-Morgan medals which consist of three separate awards made for the most meritorious contributions to experimental chemistry (including computer simulation).[30] The Tilden Prize, previously known as the Tilden Lecture, consists of three awards annually to scientists in mid-career for advances in chemistry.

The RSC has its own coat of arms. Two forms exist: the full coat of arms has lion and unicorn bearers, and the Latin motto "Pro scientia et humanitate" (For the sake of knowledge and for the benefit of mankind). The smaller version uses just the central shield, which is similar to that in the Royal Institute of Chemistry's arms.

The society's ChemSpider is a database of chemicals and chemical properties.