In February 1911 the Belgian pilot Charles Van Den Born displayed the first aircraft in Siam at the Sa Pathum Horse Racing Course. The Siamese authorities were impressed enough that on 28 February 1912 they dispatched three officers to learn to fly in France, the main centre of aviation development of the time. After learning to fly, the three officers returned to Siam in November 1913 with eight aircraft (four Breguets and four Nieuport IVs). In March of the next year they moved from Sa Pathum airfield to Don Muang.

The Ministry of Defence put the Siamese Flying Corps under the control of the Army Engineer Inspector General Department. Prince Purachatra, Commander of the Army Engineers, and his brother Prince Chakrabongse Bhuvanath were instrumental in the development of the army's Royal Siamese Aeronautical Service to which it was renamed in 1919. In 1937, the service was again renamed when it became an independent service, as the Royal Siamese Air Force but the takeover of the country by the Thai ethnic group meant that name would only be used until 1939, when it became the Royal Thai Air Force.

During the French-Thai War, the Thai Air Force scored several air-to-air-victories against the Vichy Armée de l'Air. During World War II the Thai Air Force supported the Royal Thai Army in its occupation of the Burmese Shan States as allies of the Japanese in 1942 and defended Bangkok from allied air raids during the latter part of the war. Some RTAF personnel assisted the resistance against the Japanese. After World War II, the Thai Air Force sent three C-47s to support the United Nations in Korean War. The victorious Wings Unit, operating the C-47, also joined the US Forces in the Vietnam War. Along the border, the Thai Air Force launched many operations against communist forces, such as Ban Nam Ta Airfield Raid in Laos, and clashes occurred between Thai and Vietnamese troops along the Thai-Cambodian border. When the Cold War ended, the Thai Air Force participated in Operation Border Post 9631 along the Thai-Burmese border in 1999, and launched the evacuation of foreigners during the 2003 Phnom Penh riots in Cambodia. 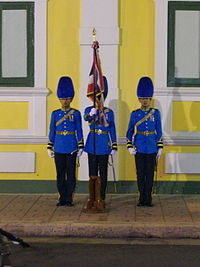 The Royal Thai Air Force maintains a number of modern bases which were constructed between 1954 and 1968, have permanent buildings and ground support equipment.

All but one were built and used by United States forces until their withdrawal from Thailand in 1976 when Thai air force assumed use of the installations at Takhli and Nakhon Ratchasima (Korat). In the late 1980s, these bases and Don Muang Air Base outside Bangkok, which the air force shares with civil aviation, remain the primary operational installations.

Maintenance of base facilities abandoned by the United States proved costly and exceeded Thai needs. Nonetheless, all runways were still available for training and emergency use.

By 2004 the Royal Thai Air Force had its main base at Don Muang airport, adjacent to Don Mueang International Airport. The RTAF also had large air fields and facilities at Nakon Ratchasima Ubon Ratchathani, and Takhli.

The following squadrons are currently active with the Royal Thai Air Force.[citation needed] 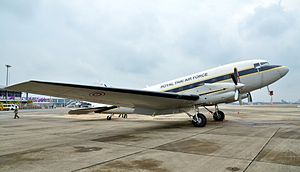 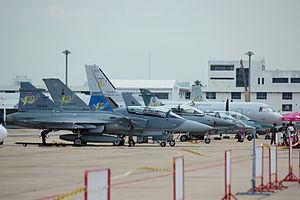 This 100 man unit, part of the Royal Thai Air Force's Special Combat Operations Squadron, was formed in the late 1970s and are based near Don Muang Airport and provide anti-hijacking capabilities. They have three assault platoons, each divided into two sections. 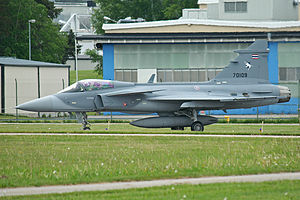 The Royal Thai Air Force Combat Group is divided into 11 wings plus a training school, plus a few direct-reporting units.

Interceptor and fighter wing based at RTAFB Korat in Nakhon Ratchasima Province. 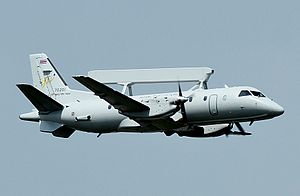 Frontal operating base at RTAFB Hatyai in Songkhla Province. 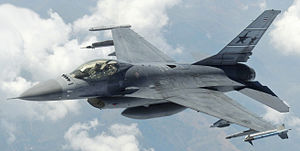 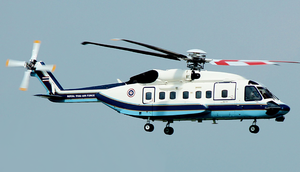 A Thai S-92 for the Royal flight 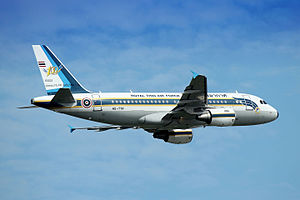 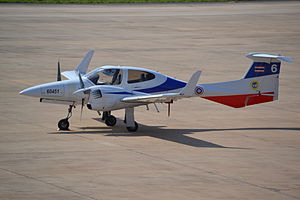 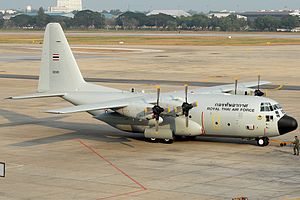