Rudolf Carnap (/ˈkɑːrnæp/;[1] German: [ˈkaɐ̯naːp]; May 18, 1891 – September 14, 1970) was a German-born philosopher who was active in Europe before 1935 and in the United States thereafter. He was a major member of the Vienna Circle and an advocate of logical positivism. He is considered "one of the giants among twentieth-century philosophers."[2] 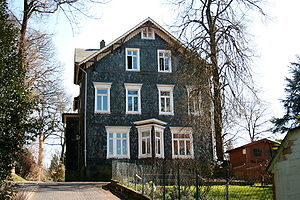 Carnap's father had risen from the status of a poor ribbon-weaver to become the owner of a ribbon-making factory. His mother came from academic stock; her father was an educational reformer and her oldest brother was the archaeologist Wilhelm Dörpfeld. As a ten-year-old, Carnap accompanied his uncle on an expedition to Greece.[3]

He began his formal education at the Barmen Gymnasium. From 1910 to 1914, he attended the University of Jena, intending to write a thesis in physics. But he also studied carefully Kant's Critique of Pure Reason during a course taught by Bruno Bauch, and was one of very few students to attend Gottlob Frege's courses in mathematical logic. While Carnap held moral and political opposition to World War I, he felt obligated to serve in the German army. After three years of service, he was given permission to study physics at the University of Berlin, 1917–18, where Albert Einstein was a newly appointed professor. Carnap then attended the University of Jena, where he wrote a thesis defining an axiomatic theory of space and time. The physics department said it was too philosophical, and Bruno Bauch of the philosophy department said it was pure physics. Carnap then wrote another thesis, with Bauch's supervision, on the theory of space in a more orthodox Kantian style, and published as Der Raum (Space) in a supplemental issue of Kant-Studien (1922). In it he makes the clear distinction between formal, physical and perceptual (e.g., visual) spaces.

Frege's course exposed him to Bertrand Russell's work on logic and philosophy, which put a sense of the aims to his studies. He accepted the effort to surpass traditional philosophy with logical innovations that inform the sciences. He wrote a letter to Russell, who responded by copying by hand long passages from his Principia Mathematica for Carnap's benefit, as neither Carnap nor his university could afford a copy of this epochal work. In 1924 and 1925, he attended seminars led by Edmund Husserl, the founder of phenomenology, and continued to write on physics from a logical positivist perspective.

Carnap discovered a kindred spirit when he met Hans Reichenbach at a 1923 conference. Reichenbach introduced Carnap to Moritz Schlick, a professor at the University of Vienna who offered Carnap a position in his department, which Carnap accepted in 1926. Carnap thereupon joined an informal group of Viennese intellectuals that came to be known as the Vienna Circle, directed largely by Moritz Schlick and including Hans Hahn, Friedrich Waismann, Otto Neurath, and Herbert Feigl, with occasional visits by Hahn's student Kurt Gödel. When Wittgenstein visited Vienna, Carnap would meet with him. He (with Hahn and Neurath) wrote the 1929 manifesto of the Circle, and (with Hans Reichenbach) initiated the philosophy journal Erkenntnis.

In February 1930 Tarski lectured in Vienna, and during November 1930 Carnap visited Warsaw. On these occasions he learned much about Tarski's model theoretic method of semantics. Rose Rand, another philosopher in the Vienna Circle, noted, "Carnap's conception of semantics starts from the basis given in Tarski's work but a distinction is made between logical and non-logical constants and between logical and factual truth... At the same time he worked with the concepts of intension and extension and took these two concepts as a basis of a new method of semantics."[4] In 1931, Carnap was appointed Professor at the German language University of Prague. There he wrote the book that was to make him the most famous logical positivist and member of the Vienna Circle, his Logical Syntax of Language (Carnap 1934). In this work, Carnap advanced his Principle of Tolerance, according to which there is not any such thing as a "true" or "correct" logic or language. One is free to adopt whatever form of language is useful for one's purposes. In 1933, W. V. Quine met Carnap in Prague and discussed the latter's work at some length. Thus began the lifelong mutual respect these two men shared, one that survived Quine's eventual forceful disagreements with a number of Carnap's philosophical conclusions.

Carnap, whose socialist and pacifist beliefs put him at risk in Nazi Germany, emigrated to the United States in 1935 and became a naturalized citizen in 1941. Meanwhile back in Vienna, Moritz Schlick was murdered in 1936. From 1936 to 1952, Carnap was a professor of philosophy at the University of Chicago. During the late 1930s, Carnap offered an assistant position in philosophy to Carl Gustav Hempel, who accepted. The two conducted research including Logical Syntax.[5] Thanks partly to Quine's help, Carnap spent the years 1939–41 at Harvard, where he was reunited with Tarski. Carnap (1963) later expressed some irritation about his time at Chicago, where he and Charles W. Morris were the only members of the department committed to the primacy of science and logic. (Their Chicago colleagues included Richard McKeon, Mortimer Adler, Charles Hartshorne, and Manley Thompson.) Carnap's years at Chicago were nonetheless very productive ones. He wrote books on semantics (Carnap 1942, 1943, 1956), modal logic, being very similar in Carnap (1956) to the now-standard possible worlds semantics for that logic Saul Kripke proposed starting in 1959, and on the philosophical foundations of probability and induction (Carnap 1950, 1952).

After a stint at the Institute for Advanced Study in Princeton, he joined the philosophy department at UCLA in 1954, Hans Reichenbach having died the previous year. He had earlier refused an offer of a similar job at the University of California, because accepting that position required that he sign a loyalty oath, a practice to which he was opposed on principle. While at UCLA, he wrote on scientific knowledge, the analytic – synthetic dichotomy, and the verification principle. His writings on thermodynamics and on the foundations of probability and induction, were published posthumously as Carnap (1971, 1977, 1980).

Carnap taught himself Esperanto when he was 14 years of age, and remained sympathetic to it (Carnap 1963). He later attended the World Congress of Esperanto in 1908 and 1922, and employed the language while traveling.

Carnap had four children by his first marriage to Elizabeth Schöndube, which ended in divorce in 1929. He married his second wife, Elizabeth Ina Stögner, in 1933.[3] Ina committed suicide in 1964.

Carnap's Logical Syntax of Language can be regarded as a response to Wittgenstein 's Tractatus.

Carnap elaborated and extended the concept of logical syntax proposed by Wittgenstein in the Tractatus (Section 3.325).

By the logical syntax of a language, we mean the formal theory of the linguistic forms of that language – the systematic statement of the formal rules which govern it together with the development of the consequences which follow from these rules. A theory, a rule, a definition, or the like is to be called formal when no reference is made in it either to the meaning of the symbols (for examples, the words) or to the sense of the expressions (e.g. the sentences), but simply and solely to the kinds and order of the symbols from which the expressions are constructed.

In the U.S, the concept of logical syntax helped the development of natural language processing and compiler design[citation needed].

The purpose of logical syntax

The purpose of logical syntax is to provide a system of concepts, a language, by the help of which the results of logical analysis will be exactly formulable.

......According to this view, the sentences of metaphysics are pseudo-sentences which on logical analysis are proved to be either empty phrases or phrases which violate the rules of syntax. Of the so-called philosophical problems, the only questions which have any meaning are those of the logic of science. To share this view is to substitute logical syntax for philosophy.

Carnap wanted only to end metaphysics but not philosophy.

Carnap, in his book Philosophy and Logical Syntax, used the concept of verifiability to reject metaphysics.

The function of logical analysis

Carnap used the method of logical analysis to reject metaphysics.

The function of logical analysis is to analyse all knowledge, all assertions of science and of everyday life, in order to make clear the sense of each such assertion and the connections between them. One of the principal tasks of the logical analysis of a given proposition is to find out the method of verification for that proposition.

The Carnap Papers consist of approximately 10,000 personal letters of correspondence. The papers were donated by his daughter, Hanna Carnap-Thost in 1974. Documents that contain financial, medical, financial, and personal information are restricted.[6] These were written over his entire life and career. Carnap used the mail regularly to discuss philosophical problems with hundreds of others. The most notable were: Herbert Feigl, Carl Gustav Hempel, Felix Kaufmann, Otto Neurath, and Moritz Schlick. Photographs are also part of the collection and were taken throughout his life. Family pictures and photographs of his peers and colleagues are also stored in the collection. Some of the correspondence is considered notable and consist of his student notes, his seminars with Frege, (describing the Begriffsschrift and the logic in mathematics). Carnap's notes from Russell's seminar Chicago, and notes he took from discussions with Tarski, Heisenberg, Quine, Hempel, Gödel, Jeffrey are part of the University of Pittsburgh's Archives and Colllections. Digitized contents include:

More than 1,000 pages of lecture outlines are preserved that cover the courses that Carnap taught in the United States, Prague, and Vienna, Prague. Drafts of his published works and unpublished works are part of the collection. includes manuscript drafts and typescripts both for his published works and for many unpublished papers and books. A partial listing include his first formulations of his "Aufbau". "Quasizerlegung"(1932), and "Vom Chaos zur Wirklichkeit"(1922) "Topologie der Raum-Zeit-Welt" (Topology of the Space-Time World, 1924) is his later 104-page piece about a logical reconstruction of the space-time framework without the use of mathematics. The holdings include a large number of unpublished papers. Much material is written in an older German shorthand, the Stolze-Schrey system. He employed this writing system extensively beginning in his student days.[6] Much of the content has been digitized. The University of California also maintains a collection of Rudolf Carnap Papers. Microfilm copies of his papers are maintaind by the Philosophical Archives at the University of Konstanz in Germany.[8]

For links to Carnap's publications and discussions of his work, see ""Carnap" in All Fields of Study". Microsoft Academic Search. Retrieved May 26, 2013.<templatestyles src="Module:Citation/CS1/styles.css"></templatestyles>

Online bibliography. Under construction, with no entries dated later than 1937.