Rudolf Schmundt (13 August 1896 – 1 October 1944) was an officer in the German Army and adjutant to Adolf Hitler during World War II. He was injured during the 20 July 1944 assassination attempt on Adolf Hitler and died a few months later from his wounds. 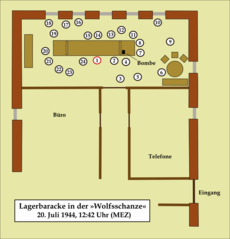 Approximate positions of participants at the conference meeting, Schmundt (7) was standing directly in front of the bomb.

Schmundt was born in Metz and served as a Lieutenant for the German Army during World War I. In World War II he attained the rank of General of the Infantry on 1 September 1944, and became the Chief of the Personnel Department of the German Army.

Throughout the war, Rudolf Schmundt was one of Adolf Hitler's many adjutants, and flew with Erwin Rommel in early 1941, just before the Afrika Korps was created.[1]

Schmundt was one of the casualties of the failed July 20 plot, planned to kill the German dictator Adolf Hitler. One of the conspirators, Colonel Claus von Stauffenberg, placed a bomb in a briefcase beside Hitler. Colonel Heinz Brandt moved it behind a heavy table leg and unwittingly saved Hitler's life, but as a consequence, he lost his own. Severely injured in the assassination attempt, Schmundt initially made a promising recovery, but ultimately died of complications resulting from his injuries on 1 October 1944.

After Schmundt's death, all current Generals and Field Marshals were summoned by Hitler to attend a funeral service at the Tannenberg Memorial, in east Prussia. As reported by Hauptmann Alexander Stahlberg (aide to Field Marshal Von Manstein) in his book "Bounden Duty", the group were entrained back to Berlin and General Schmundt was buried, on Hitler's orders, in the hero's cemetery — the Invaliden. Hitler did not attend either ceremonies.

Schmundt was posthumously awarded the German Order on 7 October 1944. He was replaced as the Chief of the Personnel Department by General Wilhelm Burgdorf, the Deputy Chief. 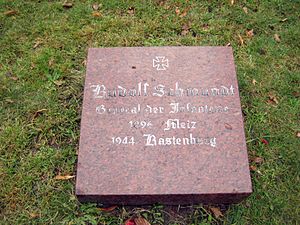 Grave at the Invalidenfriedhof, Berlin