From Infogalactic: the planetary knowledge core
Jump to: navigation, search
For other uses, see Rudra (disambiguation).
Not to be confused with Rudras.

Rudra, "a storm god and embodiment of wildness and unpredictable danger", from a 19th-century textbook on Hinduism

Rudra (/ˈrʊdrə/; Sanskrit: रुद्र) is a Rigvedic deity, associated with wind or storm,[1] and the hunt. The name has been translated as "the roarer".[2][3][4] In the Rigveda, Rudra has been praised as the "mightiest of the mighty".[5] The Shri Rudram hymn from the Yajurveda is dedicated to Rudra, and is important in the Saivism sect.[6][7]

The Hindu god Shiva shares several features with the Rudra: the theonym Shiva originated as an epithet of Rudra, the adjective shiva ("kind") being used euphemistically of Rudra, who also carries the epithet Aghora, Abhayankar ("extremely calm [sic] non terrifying").[3] Usage of the epithet came to exceed the original theonym by the post-Vedic period (in the Sanskrit Epics), and the name Rudra has been taken as a synonym for the god Shiva and the two names are used interchangeably.

The etymology of the theonym Rudra is somewhat uncertain.[8] It is usually derived from the root rud- which means "to cry, howl."[8][9] According to this etymology, the name Rudra has been translated as "the roarer".[10] An alternative etymology suggested by Prof. Pischel derives Rudra as "the red one, the brilliant one" from a lost root rud-, "to be red"[4] or "to be ruddy" or respectively, according to Grassman, "to shine".[8] A Rigvedic verse "rukh draavayathi, iti rudraha" where 'rukh' means sorrow/misery, 'draavayathi' means to drive out or eliminate and 'iti' means that which or he who, implies 'Rudra' to be the eliminator of evil and usherer of peace.

Stella Kramrisch notes a different etymology connected with the adjectival form raudra, which means wild, i.e. of rudra nature, and translates the name Rudra as "the wild one" or "the fierce god".[11] R. K. Sharma follows this alternate etymology and translates the name as "the terrible" in his glossary for the Shiva Sahasranama.[12] The commentator Sāyaṇa suggests six possible derivations for rudra.[13] However, another reference states that Sayana suggested ten derivations.[14]

The adjective shivam in the sense of "propitious" or "kind" is applied to the name Rudra in RV 10.92.9.[15] According to Gavin Flood, Shiva used as a name or title (Sanskrit śiva, "the kindly/auspicious one") occurs only in the late Vedic Katha Aranyaka,[16] whereas Axel Michaels asserts that Rudra was called Shiva for the first time in the Śvetāśvatara Upanishad.[17]

Rudra is called "the archer" (Sanskrit: Śarva)[18] and the arrow is an essential attribute of Rudra.[19] This name appears in the Shiva Sahasranama, and R. K. Sharma notes that it is used as a name of Shiva often in later languages.[20] The word is derived from the Sanskrit root śarv- which means "to injure" or "to kill"[18] and Sharma uses that general sense in his interpretive translation of the name Śarva as "One who can kill the forces of darkness".[20] The names Dhanvin ("bowman")[21] and Bāṇahasta ("archer", literally "Armed with arrows in his hands")[21][22] also refer to archery.

In other contexts the word rudra can simply mean "the number eleven".[23] The word "rudraksha" (Sanskrit: rudrākşa = rudra and akşa "eye"), or "eye of Rudra", is used as a name both for the berry of the Rudraksha tree, and a name for a string of the prayer beads made from those seeds.[23]

The earliest mentions of Rudra occur in the Rigveda, where three entire hymns are devoted to him.[24][25] There are about seventy-five references to Rudra in the Rigveda overall.[26]

Epithets of fierceness and fright

In the Rigveda Rudra's role as a frightening god is apparent in references to him as ghora ("extremely terrifying"), or simply as asau devam ("that god").[16] He is "fierce like a formidable wild beast" (RV 2.33.11).[27] Chakravarti sums up the perception of Rudra by saying: "Rudra is thus regarded with a kind of cringing fear, as a deity whose wrath is to be deprecated and whose favor curried."[28]

In RV 7.46, Rudra is described as armed with a bow and fast-flying arrows. As quoted by R. G. Bhandarkar, the hymn says Rudra discharges "brilliant shafts which run about the heaven and the earth" (RV 7.46.3), which may be a reference to the destructive power of lightning.[30]

Rudra was believed to cause diseases, and when people recovered from them or were free of them, that too was attributed to the agency of Rudra.[30] He is asked not to afflict children with disease (RV 7.46.2) and to keep villages free of illness (RV 1.114.1). He is said to have healing remedies (RV 1.43.4), as the best physician of physicians (RV 2.33.4), and as possessed of a thousand medicines (RV 7.46.3). This is described in Shiva's alternative name Vaidyanatha (Lord of Remedies).

The verse RV 2.33.9 calls Rudra as "The Lord or Sovereign of the Universe" (īśānādasya bhuvanasya).

With firm limbs, multiform, the strong, the tawny adorns himself with bright gold decorations:
The strength of Godhead never departs from Rudra, him who is Sovereign of this world, the mighty.[31]

However, Yajur Veda – Taittiriya Aranyaka[32] (1-10-1)[33] quotes Rudra and Brihaspati as Sons of Bhumi and Heaven[34]). This directly conflicts with the claim of Rudra being Supreme.

Relation to other deities 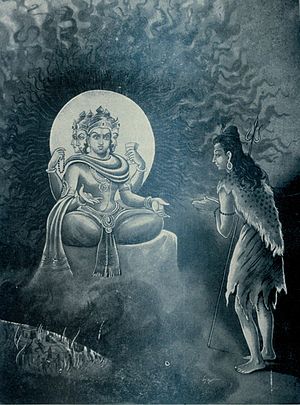 Rudra requesting Brahma to calm down

Rudra is used both as a name of Shiva and collectively ("the Rudras") as the name for the Maruts.[35] Gavin Flood characterizes the Maruts as "storm gods", associated with the atmosphere.[36] They are a group of gods, whose number varies from two to sixty, sometimes also rendered as eleven, thirty-three[37] or a hundred and eighty in number (i. e. three times sixty, see RV 8.96.8.).

Rudra is mentioned along with a litany of other deities in RV 7.40.5. Here is the reference to Rudra, whose name appears as one of many gods who are called upon:

One scholiast[clarification needed] interpretation of the Sanskrit word vayāḥ, meaning "ramifications" or "branches", is that all other deities are, as it were branches of Vishnu,[41] but Ralph T. H. Griffith cites Ludwig as saying "This [...] gives no satisfactory interpretation" and cites other views which suggest that the text is corrupt at that point.[42]

In the various recensions of the Yajurveda is included a litany of stanzas praising Rudra: (Maitrāyaṇī-Saṃhitā 2.9.2, Kāṭhaka-Saṃhitā 17.11, Taittirīya-Saṃhitā 4.5.1, and Vājasaneyi-Saṃhitā 16.1–14). This litany is subsequently referred to variously as the Śatarudriyam, the Namakam (because many of the verses commence with the word namaḥ [`homage`]), or simply the Rudram. This litany was recited during the Agnicayana ritual ("the piling of Agni"), and it later became a standard element in Rudra liturgy.

A selection of these stanzas, augmented with others, is included in the Paippalāda-Saṃhitā of the Atharvaveda (PS 14.3—4). This selection, with further PS additions at the end, circulated more widely as the Nīlarudram (or Nīlarudra Upaniṣad).[6][43]

The 10th Sikh Guru, Guru Gobind Singh describes the incarnation of Rudra in his book the Dasam Granth, the canto is titled Rudra Avatar.