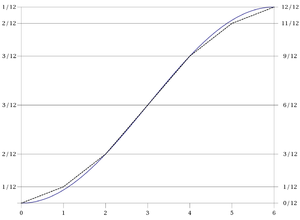 The rule of twelfths[1] is a rule of thumb for estimating the height of the tide at any time, given only the time and height of high and low water.[2] This is important when navigating a boat or a ship in shallow water, and when launching and retrieving boats on slipways on a tidal shore.

The rule assumes that the rate of flow of a tide increases smoothly to a maximum halfway between high and low tide before smoothly decreasing to zero again and that the interval between low and high tides is approximately six hours. For the six hours, the rule says that in the first hour after low tide the water level rises by one twelfth of the range, in the second hour two twelfths, and so on according to the sequence - 1:2:3:3:2:1.[3]

If a tide table gave us the information that tomorrow's low water would be at noon and that the water level at this time would be two metres above chart datum and further, that at the following high tide the water level would be 14 metres. We could work out the height of water at 3:00 p.m. as follows:

This represents only the increase - the total depth of the water (relative to chart datum) will include the 2 m depth at low tide: 6 m + 2 m = 8 metres.

Obviously the calculation can be simplified by adding twelfths together and reducing the fraction beforehand i.e.

Rise of tide in three hours

The rule is a rough approximation only and should be applied with great caution when used for navigational purposes. Officially produced tide tables should be used in preference whenever possible.

The rule assumes that all tides behave in a regular manner, this is not true of some geographical locations, such as Poole Harbour[4] or the Solent[5] where there are "double" high waters or Weymouth Bay[6] where there is a double low water.

The rule assumes that the period between high and low tides is six hours but this is an underestimate and can vary anyway.