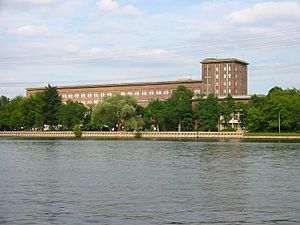 Rundfunk der DDR (German: [ˈʁʊntfʊŋk dɛɐ̯ deːdeˈʔɛɐ̯], Radio of the GDR) was the radio broadcasting organisation for the German Democratic Republic (GDR) from 1952 until German reunification, after which it continued until 1991 as Funkhaus Berlin (Broadcasting Center Berlin). The organization was based in the Funkhaus Nalepastraße in East Berlin.

The pre-war Deutschlandsender stations, under the control of Joseph Goebbels' Reichsministerium für Volksaufklärung und Propaganda as the Großdeutsche Rundfunk, were closed by the Allied forces upon Germany's surrender in May 1945. On 13 May 1945, the Soviet Military Administration in Germany (SMAG) began a radio broadcasting service to the people of Berlin called Berliner Rundfunk, operating from what would become the British sector of West Berlin. The station was controlled by Walter Ulbricht.

When the three Western occupation sectors in Berlin were established, the American zone gained the station Rundfunk im amerikanischen Sektor (RIAS), while the British zone established the Nordwestdeutscher Rundfunk (NWDR) which also broadcast in their zone. In 1948, control of the NWDR was transferred to the provisional government in West Germany (later becoming Sender Freies Berlin), while RIAS remained under direct American control.

On 15 September 1952, the SMAG formally transferred control of broadcasting in the GDR to the East German government.

After the construction of the Berlin Wall in August 1961, the GDR began a programme to attempt to prevent its citizens from listening to broadcasts from RIAS and Sender Freies Berlin (SFB), the local outlet of the West German broadcasting consortium ARD. The Freie Deutsche Jugend (Free German Youth), the official youth movement in the GDR, started the campaign "Blitz contra Natosender" - "Lightning against NATO's transmitters" - to encourage young people to remove or turn away aerials pointing at the west. The term Republikfluchtigen (Defection by Television) was sometimes used to describe the widespread practice of viewing Westfernsehen (Western TV).

The GDR also instituted a programme of jamming foreign signals, both shortwave broadcasts from international broadcasters such as the BBC and local broadcasts such as RIAS. A network of jamming stations was built covering the entire country. However, attempts to jam broadcasts from West Berlin were soon abandoned as it was found to be impossible to do so effectively without also disrupting reception within West Germany - which was outlawed by treaty - and also ran the risk of counter-jamming of East German stations.

Nevertheless, people continued (or attempted) to listen to RIAS and SFB/ARD broadcasts. In 1981, a further attempt was made to draw GDR radio listeners - especially the young - from western broadcasts by launching a youth radio station, DT64. By 1985 there were 6,646,500 licensed radios in the country, or 39.9 for every 100 persons.

After the Fall of the Wall

After the fall of the Berlin Wall in November 1989, the radio organisation of the GDR began to shut down as services from West Germany were introduced and the GDR's stations were renamed and refocused in anticipation of the country joining the existing ARD system on 1 January 1992.

The Soviet Union maintained a service for its troops on GDR soil, "Radio Wolga", which broadcast on 261 kHz longwave. The Soviet foreign service was broadcast from East Germany on 1323 kHz mediumwave. Radio Wolga was closed when the last Soviet troops left German soil.

At Soviet military barracks, Programme 1 of Soviet television was transmitted on low power for the soldiers, in a similar way to the highly localised broadcasts of AFN, SSVC, CFN and the French FFB in the west. The last Russian transmitter was closed in 1994.