Rural Free Delivery (RFD) is a service which began in the United States in the late 19th century, to deliver mail directly to rural farm families. Prior to RFD, individuals living in more remote homesteads had to pick up mail themselves at sometimes distant post offices or pay private carriers for delivery. The proposal to offer free rural delivery was not universally embraced. Private carriers and local shopkeepers feared a loss of business. The postal service began experiments with Rural Free Delivery as early as 1890. However, it was not until 1893, when Georgia Congressman Thomas E. Watson pushed through legislation, that the practice was mandated.[1] However, universal implementation was slow; RFD was not adopted generally in the United States Post Office until 1902.[2] The rural delivery service uses a network of rural routes traveled by carriers to deliver and pick up mail to and from roadside mailboxes.[3] 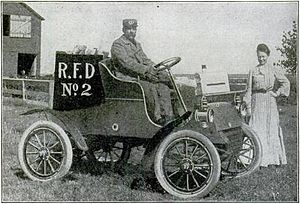 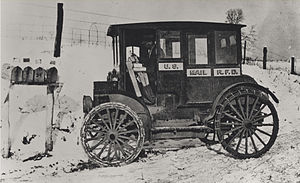 Rural carrier in an early electric vehicle, circa 1910

Until the late 19th century, residents of rural areas had to either travel to a distant post office to pick up their mail, or else pay for delivery by a private carrier. Postmaster General John Wanamaker was ardently in favor of Rural Free Delivery (RFD),[4] as it was originally called, along with many thousands of Americans living in rural communities who wanted to send and receive mail inexpensively. However, the adoption of a nationwide RFD system had many opponents. Some were simply opposed to the cost of the service. Private express carriers thought inexpensive rural mail delivery would eliminate their business, and many town merchants worried the service would reduce farm families' weekly visits to town to obtain goods and merchandise, or that mail order merchants selling through catalogs, such as Sears, Roebuck and Company might present significant competition.[1][5]

Much support for the introduction of a nationwide rural mail delivery service came from The National Grange of the Order of Patrons of Husbandry, the nation's oldest agricultural organization.[4]

Fayette County in east-central Indiana may be the birthplace of Rural Free Delivery. Milton Trusler, a leading farmer in the county, began advocating the idea in 1880; as the president of the Indiana Grange, he spoke to farmers statewide frequently over the following sixteen years.[6]

The Post Office Department first experimented with the idea of rural mail delivery on October 1, 1891 to determine the viability of RFD. They began with five routes covering ten miles, 33 years after free delivery in cities had begun. The first routes to receive RFD during its experimental phase were in Jefferson County, West Virginia, near Charles Town, Halltown, and Uvilla.[7]

Legislation by U.S. Congressman Thomas E. Watson of Georgia mandated the practice, and RFD finally became an official service in 1896.[1] That year, 82 rural routes were put into operation. A massive undertaking, nationwide RFD service took several years to implement, and remains the "biggest and most expensive endeavor"[8] ever instituted by the U.S. postal service.

The following is a list of the first rural routes established in each state, along with the names of the (up to three) Post Offices served and the date of establishment.[7]