From Infogalactic: the planetary knowledge core
Jump to: navigation, search
For the Germanic name, see Roderick.
For the ships, see Rurik (1851), Rurik (1892) and Rurik (1906).

Rurik or Riurik (Old Church Slavonic: Рюрик, from Rørik; c. 830 – 879) was a legendary Varangian chieftain who gained control of Ladoga in 862, built the Holmgard settlement near Novgorod, and founded the Rurik Dynasty, which ruled Kievan Rus (and later Grand Duchy of Moscow and Tsardom of Russia) until the 17th century.

There is a debate over how Rurik came to control Ladoga and Novgorod.[citation needed] The only information about him is contained in the 12th century Primary Chronicle, which states that Chuds, Eastern Slavs, Merias, Veses, and Krivichs "...drove the Varangians back beyond the sea, refused to pay them tribute, and set out to govern themselves". Afterwards the tribes started fighting each other and decided to invite the Varangians, led by Rurik, to reestablish order. 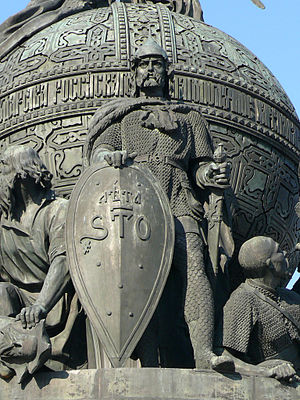 Monument celebrating the millennial of Rurik's arrival at Novgorod

According to the Primary Chronicle, Rurik was one of the Rus, a Varangian tribe likened by the chronicler to Danes, Swedes, Angles, and Gotlanders. In the 20th century, archaeologists partly corroborated the chronicle's version of events,[1][clarification needed] but mostly the excavations denied most of the chronicle's data about Rurik's arrival when it was apparent that the old settlement stretched to the mid-8th century and the excavated objects were mostly of Finnish-Ugric and Slavic origin, dated to the mid-8th century, which showed the settlement was not Scandinavian from the beginning.[2][page needed]

Rurik remained in power until his death in 879. His successors (the Rurik Dynasty), however, moved the capital to Kiev and founded the state of Kievan Rus', which persisted until the Mongol invasion in 1240. A number of extant princely families are patrilineally descended from Rurik, although the last Rurikid to rule Russia, Vasily IV, died in 1612.[citation needed]

According to the entries in the Radzivil and Hypatian Chronicles[3] under the years 862–864, Rurik’s first residence was in Ladoga. It is only later that he moved his seat of power to Novgorod, a fort built not far from the source of the Volkhov River. The meaning of this place name in medieval Russian is "new fortification", while the current meaning ("new town") appeared only later.

Possible identity with Rorik of Dorestad 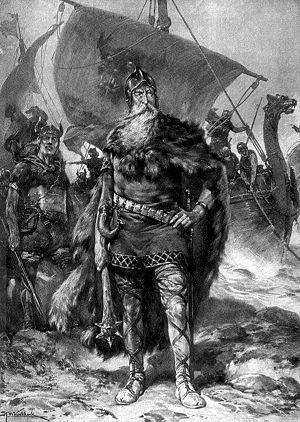 Rorik of Dorestad, as conceived by H. W. Koekkoek

The only Hrörek described in Western chronicles was Rorik of Dorestad, a king from the royal Scylding house of Haithabu. Since the 19th century, there have been attempts to identify him with the Viking prince Rurik of Russian chronicles.[4]

Roerik of Dorestad was born about 810/820 to Ali Anulo, 9th King of Haithabu. Frankish chroniclers mention that he received lands in Friesland from the Emperor Louis I. This was not enough for him, and he started to plunder neighbouring lands: he took Dorestad in 850, captured Haithabu in 857, and looted Bremen in 859. The Emperor was enraged and stripped him of all his possessions in 860. After that Roerik disappears from the Western sources for a considerable period of time. At that very moment, in 862, the Russian Rurik arrives in the Eastern Baltic, builds the fortress of Ladoga, and later moves to Novgorod.

Roerik of Dorestad reappeared in Frankish chronicles in 870, when his Friesland demesne was returned to him by Charles the Bald; in 882 he is already mentioned as dead. The Russian chronicle places the death of Rurik of Novgorod at 879. According to Western sources, the ruler of Friesland was converted to Christianity by the Franks. This may have parallels with the Christianization of the Rus', as reported by Patriarch Photius in 867.

Whereas there have been some attempts in the 19th century to identify Rurik, which is a legendary figure, with Roerik of Dorestad, they were not successful, and the theory of their identity currently has no supporters among scholars.[5] 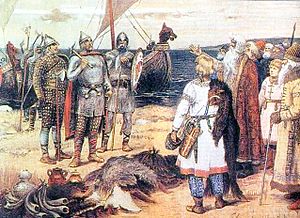 Rurik and his brothers Sineus and Truvor arrive at Ladoga

The Rurikid dynasty went on to rule the Kievan Rus', and ultimately the Tsardom of Muscovy, until 1598. Numerous noble Russian and Ruthenian families claim a male-line descent from Rurik, and via Anne of Kiev, wife of Henry I of France, Rurikid ancestry can also be argued for numerous Western European lineages.[citation needed]

Vasily Tatishchev (a Rurikid himself) claimed that Rurik was of Wendish extraction and went so far as to name his wife, Ufanda of Norway (Endvinda? Alfrind?); mother, Umila; his maternal grandfather, Gostomysl; and a cousin, Vadim (apparently basing his account on the lost Ioachim Chronicle).[citation needed]

According to the FamilyTreeDNA Rurikid Dynasty DNA Project, Rurik appears to have belonged to Y-DNA haplogroup N1c1, based on testing of his modern male line descendants.[6] Contrary to the Norman theory of the origin of the Kievan Rus' state, N1c1 is not widely found in Scandinavian countries, but is overwhelmingly found among Baltic and Finnish ethnicities. The N1c1 haplotype possess the distinctive value DYS390=23, also rarely found in Scandinavia.[citation needed] The closest relatives of the Rurikid haplotype are found in coastal Finland, among the Swedish-speaking Finns.[7]