From Infogalactic: the planetary knowledge core
Jump to: navigation, search
For the opera of the same name by Alexander Dargomyzhsky, see Rusalka (Dargomyzhsky).

listen)), Op. 114, is an opera ('lyric fairy tale') by Antonín Dvořák. The Czech libretto was written by the poet Jaroslav Kvapil[1] (1868–1950) based on the fairy tales of Karel Jaromír Erben and Božena Němcová. Rusalka is one of the most successful Czech operas, and represents a cornerstone of the repertoire of Czech opera houses.[1] A Rusalka is a water sprite from Slavic mythology, usually inhabiting a lake or river.

Dvořák had played viola for many years in pit orchestras in Prague (Estates Theatre from 1857 until 1859 while a student, then from 1862 until 1871 at the Provisional Theatre). He thus had direct experience of a wide range of operas by Mozart, Weber, Rossini, Lortzing, Verdi, Wagner and Smetana. Rusalka was the ninth opera Dvořák composed.[2]

For many years unfamiliarity with Dvořák's operas outside Czechoslovakia helped reinforce a perception that composition of operas was a marginal activity, and that despite the beauty of its melodies and orchestral timbres Rusalka was not a central part of his output or of international lyric theatre. In recent years it has been performed more regularly by major opera companies.[2] In the five seasons from 2008 to 2013 it was performed by opera companies worldwide far more than all of Dvořák's other operas combined.[3]

The most popular excerpt from Rusalka is the "Song to the Moon" ("Měsíčku na nebi hlubokém") from act 1 which is often performed in concert and recorded separately. It has also been arranged for violin and used on film sound tracks. 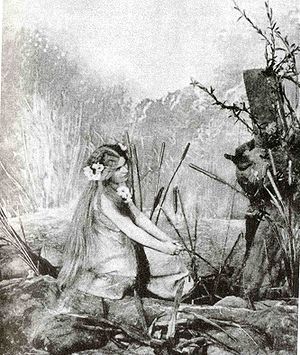 Kvapil's libretto, based on Erben's and Božena Němcová's work, was written before he had any contact with the composer. The plot contains elements which also appear in The Little Mermaid by Hans Christian Andersen and in Undine by Friedrich de la Motte Fouqué,[1] and has been described as a "sad, modern fairy tale", in a similar vein to his previous play, Princessa Pampeliška.[4] The libretto was completed by 1899, when Kvapil began looking for composers interested in setting his text. His composer friends were engaged with other works, but mentioned that Dvořák was looking for a project. The composer, always interested in Erben's stories, read the libretto and composed his opera quite rapidly, with the first draft begun on 22 April 1900 and completed by the end of November.[5] Coming after his four symphonic poems inspired by the folk-ballads of Erben of 1896–97, Rusalka may be viewed as the culmination of Dvořák's exploration of a "wide variety of drama-creating musical techniques".[2]

Rusalka was first performed in Prague on 31 March 1901, with Růžena Maturová as the first Rusalka. It became an enormous success in Czech lands, and soon gained success also abroad.[6]

The first performance outside Czechoslovakia took place in Ljubljana.[7] The opera was given in Vienna by a Czech company in 1910; in German translation it was given in Stuttgart in 1935. The UK stage premiere was at Sadler's Wells Theatre in 1959; an 1983 production by English National Opera was filmed and revived several times.[5]

The United States premiere of the opera was presented by the San Diego Opera in 1975 with Kathryn Bouleyn in the title role.[8] In January 2014 the Metropolitan Opera staged its revival of Rusalka with acclaimed soprano Renée Fleming in the title role.[9] 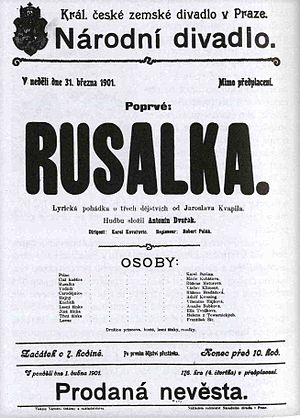 Poster for the premiere of Rusalka in Prague, 31 March 1901

A meadow by the edge of a lake

Three wood-sprites tease the Water-Goblin, ruler of the lake. Rusalka, the Water-Goblin's daughter, tells her father she has fallen in love with a human Prince who comes to hunt around the lake, and she wants to become human to embrace him. He tells her it is a bad idea, but nonetheless steers her to a witch, Ježibaba, for assistance. Rusalka sings her "Song to the Moon", asking it to tell the Prince of her love. Ježibaba tells Rusalka that, if she becomes human, she will lose the power of speech and moreover that, if she is betrayed by the prince, both of them will be eternally damned. Rusalka agrees to the terms and drinks a potion. The Prince, hunting a white doe, finds Rusalka, embraces her, and leads her away, as her father and sisters lament.

The garden of the Prince's castle

A Gamekeeper and his nephew, the Kitchen-Boy, note that the Prince is to be married to a mute and nameless bride, suspecting witchcraft and doubting it will last, as the prince is already lavishing attentions on a Foreign Princess who is a wedding guest. The Foreign Princess, jealous, curses the couple. The prince rejects Rusalka. The Water-Goblin takes Rusalka back to his pond. The Foreign Princess, having won the Prince's affection, now scorns it.

A meadow by the edge of a lake

Rusalka asks Ježibaba for a solution to her woes and is told she can save herself if she kills the Prince with the dagger she is given. Rusalka rejects this, throwing the dagger into the lake. Rusalka becomes a bludička, a spirit of death living in the depths of the lake, emerging only to lure humans to their deaths. The Gamekeeper and the Kitchen Boy consult Ježibaba about the Prince, who, they say, has been betrayed by Rusalka. The Water-Goblin says that it was actually the Prince that betrayed Rusalka. The wood-sprites mourn Rusalka's plight. The Prince, searching for his white doe, comes to the lake, senses Rusalka, and calls for her. He asks her to kiss him, even knowing her kiss means death and damnation. They kiss and he dies; and the Water-Goblin comments that "All sacrifices are futile." Rusalka thanks the Prince for letting her experience human love, commends his soul to God, and returns to her place in the depths of the lake as a demon of death.

Dvořák's music is generally through-composed, and uses motifs for Rusalka, her damnation, the water sprite and the forest.[7] His word-setting is expressive while allowing for nationally inflected passages, and Grove judges that the work shows the composer at the height of his maturity.[5] He uses established theatrical devices – dance sections, comedy (Gamekeeper and Turnspit) and pictorial musical depiction of nature (forest and lake).[2] Rodney Milnes (who provided the translation for an ENO production) admired the "wealth of melodic patterns that are dramatic in themselves and its shimmering orchestration".[10] One writer considered the final section of the opera – the duet for the Prince and Rusalka – as "[twelve] or so of the most glorious minutes in all opera" in their "majestic, almost hymnic solemnity"[2] while another described the opera as a "vivid, profoundly disturbing drama".[10]