Ukrainian and Russian boundary markers
File:Map of Ukraine border with Russia.png
Section of the State Border of Ukraine that borders Russian Federation 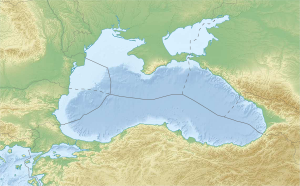 The Russian-Ukrainian border is the international state border between Russia and Ukraine, which formally has been in existence since Ukraine's independence from the Soviet Union, on August 24, 1991. Over land the border outlines five oblasts (regions) of Ukraine and five oblasts of the Russian Federation.

Since the spring of 2014 the border has been compromised due to the 2014–present Russian military intervention in Ukraine. In 2014, the Ukrainian government unveiled a plan to build a defensive walled system along the border with Russia, named "Project Wall". It would cost almost $520 million, take four years to complete and has been under construction as of 2015.[1]

The border has inherited its location from the administrative territorial division between the Ukrainian SSR and the Russian SFSR. The first real demarcation took place in May 1918 in Kursk.[2] After the fall of the Russian Empire, most of Ukraine (Ukrainian People's Republic) was overran by Red Guards of the Soviet Russia. With the help of Central Powers, Ukraine managed to recover all its territories of "Ukrainian governorates" and also annexed number of neighboring counties of Kursk and Voronezh governorates where ethnic composition of population was predominantly Ukrainophone (Ukrainian speaking).[3] On May 6, 1918 a ceasefire agreement was signed in Konotop between Ukraine and the Soviet Russia.[2] Between the fighting sides was created a neutral territory between 10–40 km wide to prevent further aggression, yet the Russian side decided to create some guerrilla forces which were transformed in two "Ukrainian divisions"[2] (see Nikolay Shchors).

Peace talks started on May 23, 1918 in Kiev where the Russian delegation was headed by Christian Rakovsky and Dmitry Manuilsky, while the Ukrainian - by Serhiy Shelukhin (Ambassador of Ukraine to Russia).[2] On June 12, 1918 the sides signed the preliminary peace treaty.[2] Further negotiations stalled due to lack of consensus on issue of the border.[2] The Ukrainian side was proposing an ethnic principle based on the already established political, geographical and economic aspects, while the Russian side insisted on conducting a plebiscite in each populated place.[2] On June 22, 1918 both sides finally agreed to go along with the Ukrainian proposition, while any contested issues would be decided by plebiscite.[2] Yet any further negotiations led nowhere and were terminated by the Ukrainian delegation in October 1918 as it was becoming apparent that the Russian was using their time more for the pro-Soviet propaganda.[2]

More productive were negotiations between the Don Republic and Ukraine that started their negotiations soon after the Don Republic formed its government on May 16, 1918.[2] The Don side was presented by the Minister of trade Vladimir Lebedev and the Ambassador of Don to Ukraine General Aleksandr Cheriachukin, while the Ukrainian side - by the Minister of Foreign Affairs Dmytro Doroshenko.[2] On August 8, 1918 the sides signed the treaty "About basic principles of bilateral relations" where every side agreed to renounce its territorial contests against each other and border was established based on the gubernatorial division of the Russian Empire.[2] The Don-Ukraine border outlined the Oblast of Don Host to the west of Don Republic and Yekaterinoslav, Kharkiv, Voronezh guberniyas to the east of Ukraine.[2] To Ukraine also was ceded some territory of right bank Kalmius river just east of Mariupol "to ensure the proper administration of the city and port".[2] On September 18, 1918 between Don and Ukraine was created Don-Ukrainian Commission in administration of the Taganrog Industrial District based in Kharkiv.[2]

After the second invasion of the Soviet troops in 1919, the new Soviet government of Ukraine intended to retain all territorial gains of the Ukrainian national government (Ukrainian State).[3] However, after several rounds of negotiations, the border between the "Ukrainian governorates" (Chernihiv and Kharkiv) and the "Russian governorates" (Bryansk and Kursk) were left intact.[3] It also was agreed that Ukraine will border Crimea at the Perekop Isthmus.[3] On March 10, 1919 a border treaty was signed between the Russian SFSR and the Ukrainian SSR.[3]

On April 24, 1919 the Ukrainian SSR was stripped off four counties of the Chernihiv Governorate that on the unilateral decision of the People's Commissariat of Foreign Affaris of the Russian SFSR were transferred to the newly created Gomel Governorate.[3] On April 28, 1919 the Central Committee of the Communist Party of Ukraine simply acknowledged it.[3]

The status of the Crimea and of the city of Sevastopol is currently under dispute between Russia and Ukraine; Ukraine and the majority of the international community consider the Crimea to be an autonomous republic of Ukraine and Sevastopol to be one of Ukraine's cities with special status, while Russia, on the other hand, considers the Crimea to be a federal subject of Russia and Sevastopol to be one of Russia's three federal cities since the March 2014 annexation of Crimea by Russia.[4][5] Since 1991 Russia also leases Sevastopol Naval Base with the current lease extending to the 2040s with an option for another extension, but the Russian State Duma approved the denunciation of this lease agreements unanimously by 433 members of parliament on 31 March 2014.[6] Borders of the Russian Naval Base in the city of Sevastopol and its vicinity has not been clearly identified.

The Russia–Ukraine border has the biggest number of border checkpoints in Ukraine.[citation needed]

A treaty on the demarcation of the common border between the foreign ministers of Ukraine and Russia was signed on 17 May 2010 and came into force on 29 July of the same year.[7] However 16 June 2014 the National Security and Defense Council of Ukraine ordered the government to carry an one-side demarcation of the border "in terms of existing threats to national security"; amidst the worst fighting of the 2014 pro-Russian conflict in Ukraine.[7]

Following the alleged 2014–15 Russian military intervention in Ukraine, in June 2014, Ukrainian politician and business magnate Ihor Kolomoyskyi suggested to build a wall along the border of Russia.[8] On 3 September 2014 Ukrainian Prime Minister Arseniy Yatsenyuk announced Ukraine would strengthen its border with Russia and called this "Project Wall".[9] The command of Ukraine's anti-terrorist forces stated that "Two defense lines have been planned, and their main goal is to prevent the infiltration by the adversary into the territory of Ukraine".[10] According to Yatsenyuk the project was needed "to cut off Russian support for insurgents in eastern regions" and also to obtain a visa-free regime with the European Union for Ukraine.[11][12] It is also an employment project.[13] Project "Wall" was officially started on 10 September 2014.[14]

As of May 2015, a walled defense system was under construction along the Russian border in Kharkiv Oblast.[1] The project is planned to be finished in 2018.[17]

The section of the border between the Chernihiv Oblast and Bryansk Oblast has length of 183 km (114 mi).[18]

During the war in Donbass, the section of border operations was suspended.

The section of the border between the Donetsk Oblast and Rostov Oblast has length of 178.5 km (110.9 mi).[19] During the war in Donbass, the section of border operations was suspended.

File:Ferry Ostfold entering the Harbour of Messina - Sicily - Italy - 18 June 1999.jpg
The former Norwegian ferry Ostfold. In 2014, the ferry arrived at the Kerch Strait and was renamed "Krym".[20]

Since March 16, 2015, the Russia-Ukraine local border traffic agreement was unilaterally terminated by Ukraine citing national security.[21] As a result, over 100 local border crossing points were closed.[22]

On March 24, Ukrainian side informed that Russia temporarily froze the local border traffic within the territory of Kharkiv, Sumy and Luhansk regions of Ukraine adjacent to Belhorod and Voronezh regions of Russian Federation. Local BCPs “Zhuravlivka” and “Oleksandrivka” (Kharkiv region) were the exception.[23]