The Russian Aerospace Defence Forces or VKO[1] (Russian: Войска воздушно-космической обороны, tr. Voyska Vozdushno-Kosmicheskoy Oborony[2] was a branch of the Armed Forces of the Russian Federation responsible for aerospace defence, and the operation of Russian military satellites and the Plesetsk Cosmodrome. It was established on the 1 December 2011 and replaced the Russian Space Forces.[3] The VKO was first commanded by former Space Forces commander Colonel General Oleg Ostapenko, who was promoted to Deputy Minister of Defence in November 2012.[4][5] On 24 December 2012, Aleksandr Golovko was appointed the new commander.[6] Although it is officially translated as aerospace in English,[7] it covers both attacks from the air and from (outer) space, and some Russian writers translate it as "air and space" instead.[4][8]

In 1967 the Anti-Missile and Space Defence Forces were formed (Russian: войска противоракетной и противокосмической обороны [ПРО и ПКО], tr. Voyska Protivoraketnoy i Protivokosmicheskoy Oborony [PRO i PKO]) under Artillery Lieutenant General Yu. Votintsev.[11] They were reorganised as the Ministry of Defence Space Service Units in 1982, and were expanded to include the Chief Space Operations Directorate in 1986. In 1991 the Soviet Union was broken up. The Russian Armed Forces were established on 7 May 1992, enabling the creation of Russian Space Forces later that year on 10 August. They were merged with the Strategic Missile Troops in 1996, but were reformed in 2001.

In 2006 President Vladimir Putin agreed with the idea of a new "Air and Space Defence Concept" from 2016, but without the implication that it would be a separate service. In 2008 Aleksandr Zelin argued that the missile defence and space defence forces should be merged into the Air Force.[8]

On 30 November 2010 President Dmitry Medvedev said that air and space defence services would be under a single strategic command and the General Staff and Ministry of Defence had decided it would be on the basis of the Space Forces. In April 2011 the then Space Forces commander Oleg Ostapenko said that concept for the future system had been approved. The service was created by the presidential decree “On changes to the composition of the Russian Armed Forces until January 1, 2016” which has not been published.[8]

Thus, on the 1 December 2011, the Space Forces became the Aerospace Defence Forces, fusing all space and some air defence components into one joint service. On the 1 August 2015, the VKO was merged with the Russian Air Force to form the Russian Aerospace Forces, by orders of the President of Russia Vladimir Putin, and upon the recommendation of the Minister of Defense Sergei Shoigu. 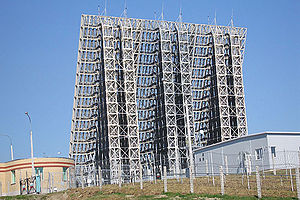 Until 12 August 2015 the Aerospace Defence Forces was organized into 2 commands: the Air and Space Defence Command; and the Space Command. The structure was as follows:[4][7][8]

In early March 2014, spokesman of the forces said the aerospace defences would include a space -and ground-based intelligence- gathering and missile early warning network, an air and space defence command, a VKO command-and-control structure, and a logistics support branch. Deputy Defence Minister Yury Borisov said on that month that the military would invest 2 trillion rubles ($55.3 billion) in building up its aerospace defence weapons over the next six years to ensure they are capable of thwarting existing and future types of air and space attacks.

With the reformation of the VKO by merging with the Russian Air Force and its component units in August 2015, the following units now report to Russian Aerospace Forces headquarters in Moscow:

Followed by their respective subordinate units:

Forces of central subordination of the Russian Air Force 2008

The Aerospace Defence Forces had locations across Russia and bases in some Commonwealth of Independent States countries such as early warning radars in Azerbaijan (until December 2012), Kazakhstan and Belarus, and the Okno facility in Tajikistan. For a more detailed list of air bases now used by the Russian Aerospace Forces, see List of Soviet Air Force bases

Until 2015 the VKO operated the following facilities for aerospace defence operations, with the merger of the Air Force it also now handles the operations of Russia's hundreds of active air bases and air training centres.