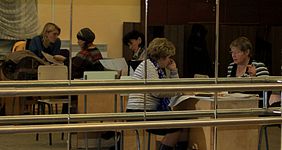 Inside a census station in Severodvinsk

The Russian Census of 2010 (Russian: Всеросси́йская пе́репись населе́ния 2010 го́да) is the first census of the Russian Federation population since 2002 and the second in its post-Soviet history. Preparations for the census began in 2007 and it took place between October 14 and October 25.[1] 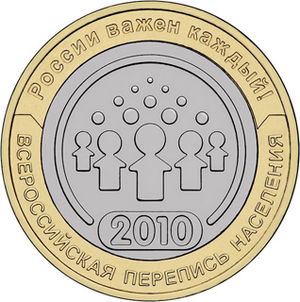 A 10-ruble coin commemorating the 2010 Census

The census was originally scheduled for October 2010, but was moved to 2013 allegedly for financial reasons,[2] although it was also speculated that political motives were influential in the decision. However, in late 2009 Russian Prime Minister Vladimir Putin announced that the Government of Russia allocated 10.5 billion rubles in order to conduct the census as originally scheduled (in October 2010).[3][4]

The ethnic composition is dominated by Russians (80.9% of the population).[5]