The Russian Constitution of 1906 refers to a major revision of the 1832 Fundamental Laws of the Russian Empire, which transformed the formerly absolutist state into one in which the emperor agreed for the first time to share his autocratic power with a parliament. It was enacted on April 23, 1906, on the eve of the opening of the first State Duma. This first-ever Russian Constitution was a revision of the earlier Fundamental Laws, which had been published as the Code of Laws of the Russian Empire (Russian: Свод законов Российской империи, pre-1917 Russian: Сводъ законовъ Россiйской имперiи) in 1832. It was granted during the Russian Revolution of 1905, in a last-ditch effort by the imperial government to preserve its own existence and keep the nation from sliding into all-out anarchy.

The new constitution provided for a bicameral Russian parliament, without whose approval no laws were to be enacted in Russia. This legislature was composed of an upper house, known as the State Council, and a lower house, known as the State Duma. Members of the upper house were half appointed by the Tsar, with the other half being elected by various governmental, clerical and commercial interests. Members of the lower house were to be chosen by various classes of the Russian people, through a complex scheme of indirect elections—with the system being weighted to ensure the ultimate preponderance of the propertied classes. While the Duma held the power of legislation and the right to question the Tsar's ministers, it did not have control over their appointment or dismissal, which was reserved to the monarch alone. Nor could it alter the constitution, save upon the emperor's initiative. The Tsar retained an absolute veto over legislation, as well as the right to dismiss the Duma at any time, for any reason he found suitable. The emperor also had the right to issue decrees during the Duma's absence—though these lost their validity if not approved by the new parliament within two months.

This charter had been granted under duress, and Nicholas abhorred its restrictions upon his power, which he had sworn at his coronation to pass on to his son. He dismissed the First and Second Dumas when they proved "unsatisfactory" to him,[1] and unilaterally altered the election statutes (in violation of the constitution) to ensure that more landed persons would be elected to future Dumas. Although the resulting Third and Fourth Dumas proved more lasting, they still quarreled with the Tsar and his government over the general direction of state policy, and over the fundamental nature of the Russian state. Ultimately, with the outbreak of the Russian Revolution of 1917, the Duma took a leading role in bringing about the Tsar's abdication, which led in turn to the abolition of the monarchy and the ascent to power of the democratically-elected Kerensky government.

Russian government prior to 1906

Prior to April 23, 1906, the Russian Empire had been an absolute monarchy, ruled by an autocratic emperor, who was commonly referred to by his pre-imperial title of "Tsar". The precise regulations by which the Tsar exercised his imperial prerogatives were first codified in 1832, with the issuance of the Set of Laws of the Russian Empire (Свод законов Российскои империи), penned by Mikhail Speransky. These laws could be altered or repealed by the emperor. However, the autocratic Tsars were generally limited by two constraints: they and their spouses must profess the Russian Orthodox faith, and they must obey the laws of succession laid down by Emperor Paul I. Beyond that, the power of the Russian emperor was virtually limitless.

Although a Boyar Duma had existed in Russia from Muscovite times until the rule of Peter I, it was an advisory institution, without legislative prerogatives. Peter abolished this organ in 1721, replacing it with the Governing Senate. This body consisted of nine (later ten) members, and was intended to oversee administration of the empire, under the direction of an Ober-Procurator, appointed (as were all members of this body) by the sovereign. The emperor might submit draft decree proposals to this committee for their deliberation and recommendations, but he was not bound to do so, nor was he required to accept their advice, once tendered. In later years, the Governing Senate took on an important role in administration and law, and by the late nineteenth century it had evolved into the highest judicial organ in Russia, with all officials and legal institutions under its control. Its decisions as to interpretation of the legal code, unless countermanded by the Tsar, were seen as absolutely authoritative. However, the Senate still remained at all times under the monarch's direct control: he named and dismissed its members, could alter its prerogatives, and was free to overrule its actions. As such, the Ruling Senate was never considered to be a "parliament" in the modern sense. 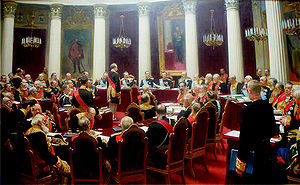 The centenary session of the State Council in the Marie Palace on May 5, 1901, prior to adoption of the Constitution of 1906. Painting by Ilya Repin.

Various proposals for reform emerged during the eighteenth and nineteenth centuries: Alexander I formed a Privy Committee to investigate introducing a parliament and ministerial system; the latter was eventually introduced, but the former foundered due to the Napoleonic wars and opposition from conservative members of the nobility. Alexander did establish a State Council, with 35—later 60—members, whose major duty was the investigation, promulgation and abrogation of laws. Its four departments were:

Each department had its own presiding officer (called a State Secretary) and met separately to discuss matters assigned to it. There were also plenary sessions of the whole Council, called to peruse laws proposed by the Tsar's ministers, who were ex-officio members. While most sessions concerned the budget and state expenditures, the Council would examine anything submitted to it. It had no authority to propose changes to existing laws, nor to investigate anything not initiated by the Tsar. Decision-making authority rested with the emperor, who appointed and dismissed members of the Council.

Alexander's nephew Alexander II entertained reformist ideas, culminating in a project initiated by Count Mikhail Loris-Melikov, who had been appointed his Minister of Interior in August 1880. One of these proposals would have established two Imperial commissions, to be populated by indirectly elected members, who would advise the Emperor on further reforms. Alexander's assassination, on the very day he intended to sign this proposal into law, effectively killed all mention of legislative reform in Russia—as the murdered Tsar's son, Alexander III, insisted upon preserving the autocracy intact. Nicholas II, who succeeded his father in 1894, was also committed to maintain absolute monarchy, even in the face of ever-increasing calls for reform, peasant unrest, and the rise of revolutionary organizations within his empire. When reforms became inevitable, Nicholas would insist upon retaining as much of his previous authority as possible. For instance, faced with demands from municipal and provincial dumas for the establishment of a national legislative assembly, Nicholas offered only a broadening of the local councils' authority, insurance for factory workers, and the abolition of censorship. This was not considered nearly enough for the liberals, who agitated even more for a constitution and far-reaching political reforms. 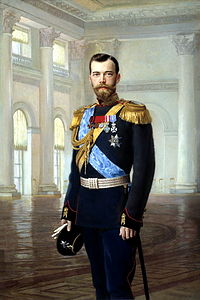 Adoption of the constitution

Russian defeat in the Russo-Japanese War of 1905 combined with a rising tide of revolutionary feeling in Russia to produce the Russian Revolution of 1905. This upheaval was initially provoked by Bloody Sunday, in which thousands of unarmed protesters (largely urban workers and intellectuals) seeking to present a petition to the Tsar were met by imperial troops, who opened fire on them and killed several.[2] As word of this tragedy spread across the empire, it combined with the catestrophic Russian defeat in the Far East to incite a major uprising against the emperor's authority. Although the Tsarist army largely remained loyal to the emperor, close advisors to the Tsar became convinced that some kind of fundamental change in State administration was inevitable, if the monarchy was to survive.

Count Sergei Witte, the Tsar's Minister of Finance and recent Russian plenipotentiary at the Treaty of Portsmouth negotiations (ending the war with Japan), was named chairman of the Tsar's Council of Ministers after returning home from New Hampshire. He proposed introduction of an elected legislature, the granting of basic civil rights, and the formation of a constitutional monarchy. Nicholas strenuously resisted these ideas, but gave in after his first choice to head a military dictatorship,[3] Grand Duke Nicholas, threatened to shoot himself in the head if the Tsar did not accept Witte's suggestion.[3] Nicholas unwillingly agreed, and issued what became known as the October Manifesto, promising basic civil rights and an elected parliament called the Duma, without whose approval no laws were to be enacted in Russia in the future.

Accordingly, three proposed drafts were prepared for a revision of Speransky's Fundamental Laws. The Tsar chose to accept the draft authored by Peter Kharitonov, Deputy State Secretary of the State Chancellory, as the basis for the new constitution. Other constitutions from Austria-Hungary, Japan and Prussia were also studied, as was a draft constitution authored by the Union of Liberation, and published abroad.[4] The State Chancellory prepared a draft, which was discussed during five sessions of the Council of Ministers, where alterations were made to further strengthen the emperor's prerogatives at the expense of the new parliament. Following this, the draft was further discussed and amended under the Tsar's chairmanship; Nicholas chose to officially publish this new constitution on April 23, 1906. With this act, Russia was officially transformed from an absolute monarchy into a constitutional one, though the exact extent of just how constitutional quickly became the subject of debate, based upon the emperor's subsequent actions.

The Russian Constitution of 1906 contained an introduction and eleven chapters:[5] comprising a total of 124 articles: 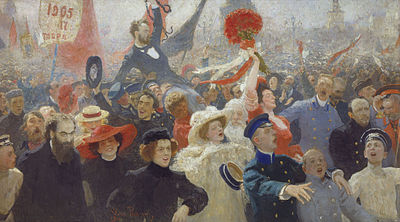 Abolition of the 1906 constitution

With the abdication of Tsar Nicholas in February 1917 (Old Style), the government of Russia was initially taken over by a Provisional Government established by the Fourth Duma. Alexander Kerensky, who became the most prominent leader of this government, unilaterally abolished the Russian monarchy on September 15, 1917, thereby formally abrogating the 1906 Constitution. In October Russia was taken over by the Bolshevik party, leading ultimately to the establishment of the Union of Soviet Socialist Republics on December 30, 1922. Prior to that time, the Communists had enacted a new constitution, firmly establishing Russia as a Bolshevik state. This was in turn superseded by the 1924 Soviet Constitution and the constitutions of 1937 and 1978, the last of which lasted until the fall of the Soviet Union and the adoption of Russia's current governing document in 1993, under which the nation is currently governed.