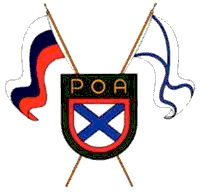 Russian Liberation Movement (Русское Освободительное Движение) was a movement within the Soviet Union that sought to create an anti-communist armed force during World War II that would topple the regime of Joseph Stalin. This movement included both Russians and peoples of other nationalities living within the Soviet Union, in which case it is referred to as the Liberation Movement of the Peoples of Russia (Освободительное Движение Народов России).

The main idea behind the movement was that Bolshevism could not be overthrown from within the USSR. Numerous previous attempts by white emigre organizations such as the Russian All-Military Union, the Brotherhood of Russian Truth, and National Alliance of Russian Solidarists (NTS) had demonstrated the futility of waging direct war against the Soviet secret police (the OGPU, and NKVD). Consequently, armed conflict with Nazi Germany was viewed as an opportunity to start a civil war against the communist government, alluding to Vladimir Lenin's strategy of using the First World War in order to create the October Revolution.

Skeptics of this approach argued that Adolf Hitler intended to destroy Russia as a nation, indicating his ideas of racial conquest and subjection or assimilation were made clear in Mein Kampf. They did not believe that Hitler distinguished Russians from Bolshevism, and that it would be better to either remain neutral (a position adopted by White General Anton Denikin[citation needed]) or even support the Soviets during the war (a position very popular amidst many February revolutionaries, such as Alexander Kerensky).

The movement began spontaneously at the outbreak of the Soviet-German war in June 1941. White Russian emigres, veterans of the White movement, began seeking sympathetic ears in the German Armed Forces (Wehrmacht) and trying to find a means of creating armed units that would be used on the Eastern Front (such as the Russian Corps).

Meanwhile, captured Soviet officers who were frustrated with the Stalinist regime also found several sympathetic ears in the German army and propaganda departments. The most notable was General Andrey Vlasov, who began emerging as the potential head of a yet to be united and defined Russian Liberation Movement.

The German propaganda department began exploiting the idea of a Russian Liberation Army (which did not exist) in order to encourage defections, printing up propaganda leaflets encouraging surrender and dropping them in Soviet zones. Most defectors, however, were immediately sent to a labor camp[citation needed].

German commanders begun forming units made of Russian volunteers (so called "HiWi's"). These units were under German command and given the patch of the nonexistent "Russian Liberation Army".

By 1942, several armed Russian units were created that had a fairly high degree of independence. These were:

It is estimated that nearly one million former Soviet citizens took up arms against the Red Army in the Wehrmacht, Waffen SS, and various Axis sponsored units (this includes other national groups such as the Ukrainians, Belarusians, Latvians, Lithuanians, Estonians, Chechens, Kazakhs, Georgians, Armenians, and other non Russian groups).

All of these units were under German supervision, kept to a restricted size (often without being fully outfitted with heavy artillery), and two of them were disarmed out of fear they would not be loyal.

The Russian anti-communist organization National Alliance of Russian Solidarists (NTS) was the only significant organized Russian group that tried to act outside of all German sponsorship. This principle was declared in 1938 by chairman Sergei Baidalakov who said in the wake of the impending military conflict: "With whom do we go? The Russian conscience can have only one answer. Not with Stalin, not with foreign conquerors, but with the entire Russian people." The hope was to create an entirely independent, self-sufficient "third force" that would be anti-Communist and at the same time anti-Nazi, based on a grass roots partisan resistance movement.

Shortly before the attack on the Soviet Union, NTS decided to close its offices on Axis occupied territories and go underground in order to avoid Axis infiltration. It also forbade its members to join any German sponsored units, such as the Russian Corps in Serbia.

NTS members began arriving in Nazi occupied Russia, often volunteering themselves as translators in the Wehrmacht, in order to make contacts with the local population (as they had attempted earlier in the pre-war years). However, due to the high presence of NKVD agents in the partisan movement, as well as the activity of Nazi security agents, the idea of a "third force" became impossible to implement. NTS's independent approach led to an all out arrest campaign by the Gestapo at the end of 1944, many members ended up in the Dachau concentration camp.

The movement encountered several obstacles, which lasted to the very end of the war:

Optimism reached a peak when the Germans lost the battle of Stalingrad, around the time General Andrey Vlasov emerged. However, despite the difficulties at the front, Hitler adamantly refused to consider any sponsorship of a Russian liberation force and permitted the idea to be circulated only for propaganda purposes.

Russian skepticism increased when Hitler issued a directive to transfer all eastern volunteer units away from the Eastern Front. The failed assassination attempt against Hitler was yet another blow to morale, since many Germans sympathetic to the Russian liberation idea were arrested and executed for their involvement in the July 20th plot. Despite good reasons for despondency the movement kept gaining inner momentum throughout 1944. Hope remained that the collapsing front would make Hitler increasingly desperate and less obstinate.

The Committee for the Liberation of the Peoples of Russia

There was no united center for the movement until the Committee for the Liberation of the Peoples of Russia was founded in November, 1944, officially announcing its existence with the Prague Manifesto. This movement, led by General Vlasov, received a surprising groundswell of support amidst white emigres, Soviet Eastern workers, and POWs, despite the apparent futility of the situation (Nazi Germany was already fighting on its own soil when the first Russian liberation units were ready for deployment). The committee received the blessing of Metropolitan Anastasy of the Russian Orthodox Church Outside Russia as well as the Paris Exarchate.

Several armed groups who had been fighting already, such as the Russian Corps of General Boris Shteifon, the "Battle Group" of white General Tourkoul, and the Cossacks of Ataman Helmuth von Pannwitz submitted themselves to the committee's command, although the turn of events prevented them from ever being de facto incorporated into the Russian Liberation Army. Others, such as General Pyotr Krasnov and several Ukrainian armed groups refused to submit to Vlasov and denounced him publicly.

While the Committee was formed with a considerable amount of gusto and enthusiasm, the end of the war was imminent and the Allies were now the movement's only hope for salvation.

Even before Nazi Germany capitulated on May 9, 1945, the supporters of the Russian Liberation Movement began focusing their hopes on Western Democracies, namely the United States and Great Britain. The reasoning was twofold: one, that these countries were much closer[citation needed] ideologically to the Russian Liberation Movement than the racist Nazi regime, and two, that these countries were already at odds with Joseph Stalin and did not want communism to spread throughout Europe. Vlasov desired to make a radio address to the Allies during the last month of the war, but this was barred by the Germans. Delegations sent by Vlasov to the allies began negotiating a surrender, and expressed a hope that they would not be betrayed to the hands of the Soviet SMERSH.

The high command of the Allies was in a difficult position, on one hand many officers and generals found sympathy with the idea of the Russian Liberation Movement (including George Patton). On the other hand, they did not want to upset relations with Stalin, to whom they had promised at the Yalta conference that they would deliver all former Soviet citizens for repatriation regardless of their wishes. Consequently, several acts of forced repatriation occurred, such as the Betrayal of Cossacks at Lienz.