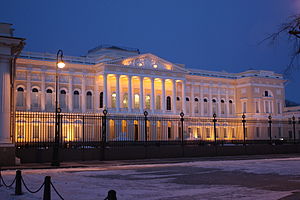 The museum was established on April 13, 1895, upon enthronement of Nicholas II to commemorate his father, Alexander III. Its original collection was composed of artworks taken from the Hermitage Museum, Alexander Palace, and the Imperial Academy of Arts. After the Russian Revolution of 1917, many private collections were nationalized and relocated to the Russian Museum. These included Kazimir Malevich's Black Square.

The main building of the museum is the Mikhailovsky Palace, a splendid Neoclassical residence of Grand Duke Michael Pavlovich, erected in 1819-25 to a design by Carlo Rossi on Square of Arts in St Petersburg. Upon the death of the Grand Duke the residence was named after his wife as the Palace of the Grand Duchess Elena Pavlovna, and became famous for its many theatrical presentations and balls.

Some of the halls of the palace retain the Italianate opulent interiors[1] of the former imperial residence. Other buildings assigned to the Russian museum include the Summer Palace of Peter I (1710–14), the Marble Palace of Count Orlov (1768–85), St Michael's Castle of Emperor Paul (1797–1801), and the Rastrelliesque Stroganov Palace on the Nevsky Prospekt (1752–54). 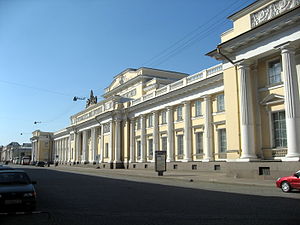 The Russian Museum of Ethnography.

The Ethnographic Department was originally set up in a building specially designed by Vladimir Svinyin in 1902.[2] The museum soon housed gifts received by Emperor's family from representatives of peoples inhabiting various regions of the Russian Empire. Further exhibits were purchased by Nicholas II and other members of his family as State financing was not enough to purchase new exhibits. In 1934, the Ethnographic Department was given the status of an independent museum: the Russian Museum of Ethnography.

The city of Málaga, home to thousands of Russian expats, has signed an agreement to host the first overseas branch of the State Russian Museum. Works displayed in Malaga will range from Byzantine-inspired icons to social realism of the Soviet era. They will be on display in 2,300 square metres (2,750 square yards) of exhibition space in La Tabacalera, a 1920s tobacco factory. The new museum is scheduled to open in early 2015. [3] [4]