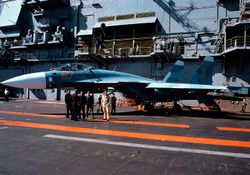 The 100th Shipborne Fighter Aviation Regiment (Military Unit Number 45782) was formed at Saki in the Crimea on 10 March 1986.[4] In January 1992 its' personnel refused to take the oath of loyalty to Ukraine, which would have presumably made them part of the Ukrainian Navy or Ukrainian Air Force, and instead its personnel left for Russia, leaving their aircraft and equipment behind. The unit regrouped at Severomorsk-3 as part of the Northern Fleet. However in February 1993 the regiment was disbanded and its personnel and equipment incorporated into the 279th Shipborne Fighter Aviation Regiment.

This is the structure of the Russian Naval Aviation, as reproduced from the August 2007 issue of the Air Forces Monthly.[6] Given the new data from 2015-16 about the two shipborne fighter aviation regiments above, the 100th Shipborne Fighter Aviation Regiment, listed at Severomorsk-3 with the MiG-29K, has been removed from the Northern Fleet listing.

As a result of the 2008 Russian military reforms, the units of the Russian Naval Aviation were reorganized into 13 new Naval Air Bases. Each new naval air base consists of an HQ, support units and one or more aviation groups/wings (the former air bases). In a second stage, the air bases were merged into territorially integrated structures. Only the 279th Regiment retained its status. The planned transfer of Naval Aviation assets (Su-24, Su-27, Tu-22M3, MiG-31) to the Air Force has been delayed [9] due to their importance to the service, but was finally implemented by the end of 2011.

As of 2012, the only fixed wing strike and fighter aircraft of Russian Naval Aviation are the Su-33 fighters and Su-25UTG attack aircraft of the 279th Regiment (forming the Admiral Kuznetsov's carrier air wing), plus the Su-24 bombers based in the Crimea. This sole bomber unit remained part of Naval Aviation as an exception to satisfy treaty requirements governing Russian forces deployments on Ukrainian territory (these must be part of the Black Sea Fleet).[10] Buying brand new multirole Sukhoi Su-30SM for the Black Sea Fleet to replace Su-24 was in the planning stages and it has been completed as of December 2016.[11][12] Naval aviation also retains the anti-submarine aircraft of the forces (the Tu-142 and the Il-38) and the helicopter arm.

Given the new data from 2015-16 from Russian sources regarding the 100th Shipborne Fighter Aviation Regiment's disbandment in 1993, Air Force's Monthly's listing of both the 100th and 279th Regiments at the Severomorsk-3 NAB has been altered by removal of the 100 KIAP.

Naval air bases of the Russian Naval Aviation include:

The Russian Naval Aviation maintains a large and varied fleet of fixed-wing and rotary aircraft, the most numerous of which is the Kamov Ka-27 anti-submarine helicopter that operates from various surface ships.