Tass is owned by the Government of Russia.[2] Headquartered in Moscow, Russia, Tass has 70 offices in Russia and in the Commonwealth of Independent States (CIS), as well as 68 bureaus around the world. Tass is the Federal State Unitary Enterprise. 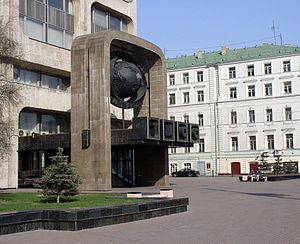 Its origin dates back to December 1902 when it began as the Commercial Telegraph Agency (TTA, Torgovo-Telegrafnoe Agentstvo) under the Ministry of Finance, with Torgovo-Promyshlennaya Gazeta's staff being the main supplier of journalists. As the demand for non-business began during the first battles of the Russo-Japanese War in February 1904, the agency had to change its name to the St. Petersburg Telegraph Agency (SPTA). As there was no change of headquarters and almost no change in its staff and function, it was a mere rebranding. In August 1914, one day after St. Petersburg was renamed Petrograd, SPTA was renamed the Petrograd Telegraph Agency (PTA). It was seized by Bolsheviks in November 1917 and by December was renamed as the Central Information Agency of the Soviet Russian Council of People's Commissars'.

On September 7, 1918 the government presidium resolved to rename PTA and the Press bureau into the Russian Telegraph Agency (ROSTA). ROSTA became "the central information agency of the whole Russian Socialist Federative Soviet Republic".

On July 10, 1925 the Telegraph Agency of the Soviet Union (TASS) was founded and took over the main functions of the Russian Telegraph Agency as the central information agency of the country. TASS enjoyed "exclusive right to gather and distribute information outside the Soviet Union, as well as the right to distribute foreign and domestic information within the Soviet Union, and manage the news agencies of the Soviet republics". TASS comprised news agencies of all the Soviet republics: RATAU (Ukraine), BELTA (Byelorussia), UZTAG (Uzbekistan), KAZTAG (Kazakhstan), GRUZINFORM (Georgia), AZERINFORM (Azerbaijan), ELTA (Lithuania), ATEM (Moldavia), LATINFORM (Latvia), KIRTAG (Kirghizia), TAJIKTA (Tajikistan), ARMENPRESS (Armenia), TURKMENINFORM (Turkmenia), ETA (Estonia). TASS news and photos were received by 4,000 Soviet newspapers, TV and radio stations and over a thousand foreign media outlets. The news agency ran one of the biggest networks of correspondents in the world - 682 offices in the country and 94 bureaus abroad, and employed close to 2,000 journalists and photo correspondents.

In January 1992, following the dissolution of the Soviet Union, a Presidential Decree signed by President Boris Yeltsin re-defined status of Tass which is the abbreviation for Telegrafnoye Agentstvo Sovetskogo Soyuza, or, in English, The Telegraph Agency of the Soviet Union, and changed its name to the Information Telegraph Agency of Russia. In May 1994 The Russian Government adopted a resolution "On approval of the Charter of the Information Telegraph Agency of Russia", under which it operates as a central government news agency. The Tass acronym was, by this point, well-recognised around the world and so was retained after being redefined as the Telegraph agency of communication and messages (Russian: Телеграфное агентство связи и сообщения, tr. Telegrafnoye agentstvo svazi i soobshcheniya). The agency as a whole was referred to as "ITAR-TASS".

In September 2014 the agency returned to its former and world-famous name for delivering news to global audiences and inside Russia - under the brand Russian News Agency TASS, shortly Tass (for Telegrafnoye agentstvo svazi i soobshcheniya).

The TASS network of correspondents and contributors is unparalleled in Russia - a staff of 1,500; 70 regional centres and offices in Russia; 68 foreign bureaus in 63 countries.

TASS Photo is the oldest news agency in Russia specializing in photo-reporting. Daily delivery of news images on major news and events in Russia.

TASS Photo archive is the largest in Russia collection of historical photo records which contains several million images and negatives. Constantly updated with current news pictures and with recently converted to digital from historical images. Hundreds of thousands of newly taken digital images pour in every year.

TASS is a member of the following world and regional media organizations:

TASS multi-media press centre is a communication floor in the heart of Moscow. Every year it hosts some 300 events featuring high-ranking Russian officials, foreign heads of state, leaders of main political parties, representatives of the world of arts and culture, scientists and sporting personalities as well as managers of Russian and foreign business enterprises. TASS press centres also operate in St. Petersburg, Yekaterinburg and Novosibirsk.

TASS is a media partner of high-profile conferences, forums and exhibitions in Russia and abroad.[4]