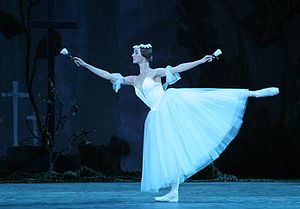 Russian ballet is a form of ballet characteristic of or originating from Russia.

Until 1689, ballet in Russia was nonexistent. The Tsarist control and isolationism in Russia allowed for little influence from the West. While the West went through the revolutions of “the Reformation, the Renaissance, and science…Russia remained cut off and bound up in the timeless liturgies of the Orthodox faith”.[1] It wasn't until the rise of Peter the Great that Russian society opened up to the West. St. Petersburg was erected to embrace the West and compete against Moscow’s backwardness. Yet the challenge to become “European” collided with the reality of Russian isolationism: “In striking contrast to their west European counterparts, the Russian elite lived unadorned lives: in wooden houses and slept on benches (or on top of the warm stove) and their clothing and manners resembled those of peasants: rough and indecorous. Men coveted long and bushy black beards, which they took to be a sign of godliness and masculinity (God was bearded and women couldn't grow one). Only demons were depicted as clean-shaven. Fancy foreign dress was prohibited, and foreigners living in Moscow were quarantined in their own ‘German Suburb,’ a ghetto of European culture coveted by a few and dismissed by most. Muscovite society was not society in any form recognizable in the West.[1]

Peter the Great created a new Russia which rivaled the society of the West with magnificent courts and palaces. His vision was not to bring Russia to the West, but to bring the West to Russia. He created a court system like that in the West through legal edicts and strict rules. In the West art was an evidence of cultural freedom, but in Russia it was a deliberately controlled expression and advancement. “The rules were carefully laid out in The Honorable Mirror of Youth, a compilation of Western courtesy books designed to educate courtiers in the intricacies of refined behavior, including dancing.”[1] Classical ballet entered the realm of Russia not as entertainment, but as a “standard of physical comportment to be emulated and internalized-an idealized way of behaving.”[1] The aim wasn’t to entertain the masses of Russians, but to create a cultivated and new Russian people.

In the early 19th century, the theaters were opened up to anyone who could afford a ticket. A seating section called a rayok, or 'paradise gallery', consisted of simple wooden benches. This allowed non-wealthy people access to the ballet, because tickets in this section were inexpensive.[2]

One author describes the Imperial ballet as “unlike that of any other country in the world…the most prestigious of the ballet troupes were those attached to the state-supported theatres. The directors of these companies were personally appointed by the tsar, and all the dancers were, in a sense, Imperial servants. In the theatre, the men in the audience always remained standing until the tsar entered his box and, out of respect, after the performance they remained in their places until he had departed. Curtain calls were arranged according to a strict pattern: first, the ballerina bowed to the tsar’s box, then to that of the theater director, and finally to the general public.[3]

By the early 1900s the Russian ballet went beyond its borders and infiltrated Paris. It had become its own force and was distinctly Russian, while still being embraced by the Parisian society. In 1903 Ivan Clustine, a Russian dancer and choreographer who had started his career at the Bolshoi Theatre, was appointed Maître de ballet at the Paris Opera.[4] Clustine's hiring promoted a frenzy of questions about his nationality and choreographic agenda: “His hiring was thought a direct attempt by the Opera to imitate the Russian company; even he thought as much, maintaining, not without despondency, that inspiration too often came from the north: ‘A revolution! A method that people often apply in the country of the tsars.’ Clustine, although acknowledging his nationality with pride, harbored none of the revolutionary intentions that some thought an inevitable consequence of being Russian.”[5]

The Parisians while denying adoption of the backwards Russian troupe had distinct Russian influence in their theater. “Despite Clustine’s protestations, several features of the Opera’s post-1909 ballets, along with its institutional conventions and balletic policy, appeared to betray a Russian influence.”[6] The stigma of Russian brutality and force was applied even in Paris. While their style was being not only accepted in Paris, but implemented in Paris theaters the Ballets Russes were still considered dangerous, even in the theatre of performing art. “The Ballets Russes, at base, became a metaphor for invasion, an eternal force that could engulf and control, could penetrate the membrane of French society, culture and even art itself.”[6] The embracing of Russian ballet in the Paris society became a point of contention and French nationalism collided with Russian determination. Questions arose about the Russian intention in the Paris theaters under the title “cultural politics” including “the delimitation of boundaries, the preservation of identity and the nature of relational engagements.”[6] Russia was incapable of simply bringing Russian culture to the West, but created a paranoia of intentions wherever they went. In the beginning the relationship between Russia and France through the arts was a testimony to their political allegiances. “French critics acknowledged a shared choreographic heritage: French ballet had migrated to Russia in the nineteenth century, only to return, decades later, under the guise of the Ballets Russes. The company, then, moored in a history that intertwined both nations, not only contributed to a cultural programme of exchange. The Ballets Russes were a testament to Franco-Russian cooperation, goodwill and support; they represented ‘un nouveau resserrement de l’alliance’ (a further strengthening of the alliance).”[5] However, the relationship made a negative turn when duplicity amongst the alliance arose. While Russia continued to borrow money from the French banks, “the Russians no longer interested in supporting French culture and colonial politics.” This duplicity gave fuel for the paranoia and lack of trust we see in the relationship concerning the arts. The Parisian press spoke of The Ballets Russes in terms of both “enchantement’, ‘bouleversement’ and ‘fantaisie’. Yet they also invoked metaphors of invasion, describing the company’s Parisian presence in terms of ‘assaut’ (onslaught) and ‘conquete’ (conquest).”[5] The dual faceted relationship can be seen in this expression of both enrapture and contention. One French journalist, Maurice Lefevre, called on his fellow Parisian’s to see the reality of the Russian invasion as though it were an infestation, “We need to do some soul-searching and ask whether our guests are not about to become our masters.”[5] To imply that Russia was about to take over France through performing arts seems to be irrational, but evidence would suggest the fears were real among those in Paris.

Other Russian ballet companies include:

A number of companies have been called, or included in their name, Moscow Ballet.

Several methods exist in Russian ballet. The most widely used is the Vaganova method, named after the ballerina and teacher, Agrippina Vaganova.[8] 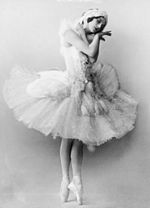 Anna Pavlova, one of the most celebrated dancers of her time